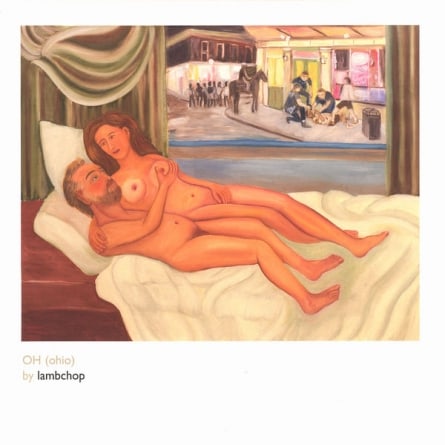 Critics have always called Lambchop a country band. Opposition has replied, “Aw, C’Mon – you’re just saying that because they’re from Nashville.” I’ve always sided with the first set emotionally, but until OH (Ohio) I had no argument against the “just an indie band” contingent. Lambchop’s new album has made me realize why I always felt they were country. It’s the “Nashville” part that’s always been throwing me off; they’re not big cowboy hat country, they’re Howard Finster country. It’s the weird, unfinished feel of their best material, not the rhythms of the most polished, that make them so American. Unfortunately, OH (Ohio) made me realize this only because it’s no longer true.

Lambchop started making beautiful twisted music 14 years ago. OH (Ohio) contains some of their loveliest songs, but the twist is completely gone. On first listen, I thought I’d be saying “stay away”: the lush, layered music is still here, as is Kurt Wagner’s distinctive voice, but the darkness that was always below the surface just isn’t. On a second listen, it occurred to me that if this were the new Iron & Wine I’d be talking about how great it is. It’s only because of the high expectations set by albums like I Hope You’re Sitting Down, Thriller and Nixon that this comes as a disappointment.

As always, Lambchop show their influences, but for the most part it’s an unsurprising list: R.E.M. plus Curtis Mayfield with a hint of country twang that’s really only noticed because they’re from Nashville. The soul blends more smoothly with the jangling guitars than on some earlier albums, but it’s not until the Durutti Column impersonation that suddenly appears in the last minute and a half of “Popeye” that we hear something new. This is refreshing, but it comes too late in the song, never mind the album, to make a real difference. Indeed, there are many pretty songs here – “Slipped, Dissolved, and Loosed” and “I Believe” would be a nice addition to any of the earlier albums – but the lack of tension makes it an easy album to ignore. “National Talk Like a Pirate Day” is a particular disappointment. It starts like early R.E.M., and it has some nice 1984-vintage Peter Buck guitar playing throughout, but there’s no passion, no creepiness and even the storytelling doesn’t live up to the title.

Critics often mark lesser albums “for fans only.” In this case, I’d say the opposite: if you’ve been with Lambchop from the beginning it’s hard not to hear what isn’t here, but a listener hoping only for a pleasant album of folkie indie rock might be very happy.

This author has not added a biography. Meanwhile Bob McCarthy has contributed 11 posts. Click here to view them.