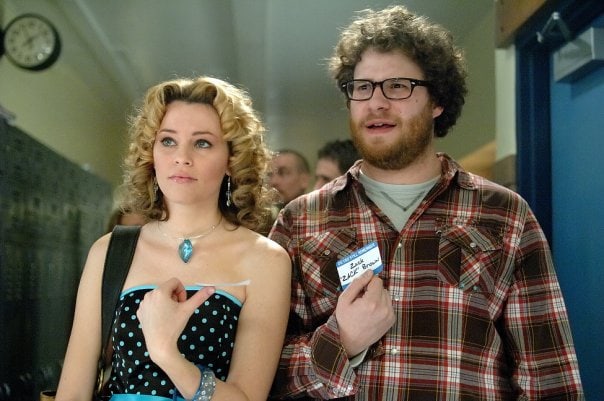 We have seen this before: a Smith movie about a band of losers drenched in profanity and inane, puerile jokes. We have also seen Seth Rogen play a fat dipshit getting with girls way out of his league. In fact, his Zack could be interchangeable with any of the characters he’s recently portrayed. But, you don’t go into a Kevin Smith film expected gravitas and tragedy. You expect bad dick and fart jokes and a chance to see Jason Mewes act like an asshole. If that is your goal, then Zack and Miri will not disappoint.

It doesn’t take William Goldman to predict where this one goes. Despite years of platonic friendship, Zack and Miri love one another. At the heart of the profane script is a sweet love story about two people too afraid to show their true feelings. While Zack tries to plan scenarios in the film that prevent Miri from having sex with anyone else in the cast, her fears of the impending consummation become palatable. When the big scene finally arrives, its direction surprises both the participants and the rest of the cast.

Drawing deep characters has never been one of Smith’s strengths: sure, Dante and Randal from Clerks are now an indelible part of pop culture, but there is a similar milieu in which all of Smith’s beautiful losers populate. They like to swear, they can’t hold down anything but menial jobs and they just want to be loved. Though slacker chic more or less vanished with the ’90s, Smith speaks to a large populace in our failing economy, the twenty and thirtysomethings living on the fringe, paycheck to paycheck.