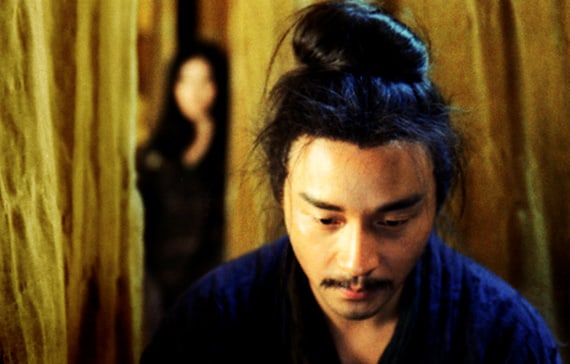 Sometimes a movie can make little sense and still be worthwhile. Wong Kar-Wai’s Ashes of Time Redux, a “re-thinking” of his 14-year-old film, is convoluted, cryptic and confusing, but it looks and sounds amazing. With many of the scenes reshot and a new score by cellist Yo-Yo Ma, this martial arts film is a visual feast of desert landscapes and acrobatic fight scenes. But at the heart of the puzzling movie is a tragic love story where the fragments of memory are all that exist.

In this abstract and dreamy story that features narration from many different characters, swordsman Ouyang Feng (Leslie Cheung) lives in a hut in what is presumably the Gobi Desert after a woman chooses his brother over him. He earns his wages as a middleman for contract killers, but nurses a still wounded heart. Each year, he is visited by swordsman Huang Yaoshi (Tony Leung Ka-fai), though he does not know why. On one visit, Huang brings a bottle of wine that is meant to erase memories. Ouyang refuses to drink it; what Ouyang does not know is Huang also annually visits the woman (Maggie Cheung) who spurned him. But now she pines for Ouyang, though she will never acknowledge those feelings.

The story is told in five chapters, beginning and ending in spring. Each season, new people arrive at Ouyang’s hut, seeking work or vengeance. Among the arrivals are a brother and sister, each seeking to kill the other, a swordsman losing his sight that longs for a far away woman, a poor peasant girl hoping to avenge her brother’s death and a warrior on camel yearning for fame and adventure. Ouyang is merely a bystander in each of these encounters; many end in blood.

At the heart of the film is memory of lost love. Just like other Wong films In the Mood For Love and 2046, the specter of unrequited romance lingers over the characters here. Lovers exist only in sensual flashbacks. There is an especially erotic scene of a woman draped over a horse, the camera focusing on her foot and then her shoulders. The film is never explicit about its aims, but longing hangs over the whole affair. Cinematographer Christopher Doyle creates a barren desert that acts in concert with the empty hearts of the characters. The colors are magnificent in this dreamlike world where muslin blows across the screen and water explodes into the sky.

Perhaps the most haunting element of Ashes of Time Redux is seeing Leslie Cheung, a famous actor who committed suicide in 2003. Like the memories of the film’s many vanished lovers, Cheung is a ghost, kept alive by celluloid recollection. As a narrator says in the film, sometimes it’s better to forget. But thanks to cinema, we can only remember Leslie Cheung.