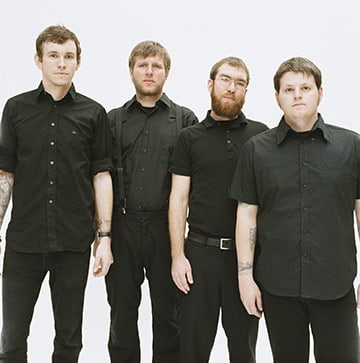 When I was 16, my friends and I took the train down to the Trocadero in Philadelphia. None of us had a car yet and the liberty of hopping the SEPTA line at North Wales and riding the rickety train downtown still felt new and exciting. But, even more exhilarating was the opportunity to see Violent Femmes and Buffalo Tom play. Now, the Trocadero is an old strip club that had been converted into a place for concerts. In the last decade, the Philadelphia Convention City was built nearby, effectively cleaning up the neighborhood. But in those days, the area was crawling with drug dealers and pimps. Not the place a sheltered, white bread suburbanite is used to frequenting. The good people at the Troc must have oversold the show by at least 50 patrons. We crammed in and as soon as the music started, the moshing began. I was flung to the side, my skinny, little body trapped against the wall. I had never experienced anything like it before (my only other concerts were more calm i.e. the Michael Jackson Victory Tour). So began a lifetime of concert-going.

Years later, I stood in Portland’s Roseland Theater, waiting for Against Me! to take the stage. Openers Future of the Left and Ted Leo and the Pharmacists had come and gone with quick and energetic sets. There is a moment in your rock concert oeuvre where one begins to realize you are older than a lot of the crowd; though this moment had long passed me by, I couldn’t help but chuckle at the age range that night. In the front stood a rag-tag band of skater punks and black-cad thrash kids. Though the most hardcore fans gathered there, the rest of the room was at half-capacity. Wasn’t Against Me! popular enough to draw a bigger audience? Behind the stage-hugging kiddos, there were the late 20/early 30-somethings, still clinging to the vestiges of youth (author included). Finally, in the rear, near the T-shirt concessions stood the dads. And the little kids too small for the impending mosh. All it takes is a magical album like New Wave, Spin’s top album of 2007, to turn an underground band like Against Me! into a sensation that even the hockey moms enjoy. I have to admit, I didn’t know who in the hell Against Me! was before picking up New Wave either. But I am also first to say that I love that record to death. It’s somewhere between guilty pleasure and fucking great album. Sue me, we can’t all be music snobs all of the time.

I had seen Against Me! during the summer at Bonnaroo and the impression that remained was how much energy the band put into the show. While rincipal singer and guitarist Tom Gabel’s vocals are mixed to the front on the album, the group is much more democratic about singing whilst on-stage. The band opened a 60 minute set at the Portland show with “Miami” from Searching For a Former Clarity (2005). The crowd burst into an incredible pit that continued to spread and spread until my buddy and I became the boundary between safety and danger. I’m not one to frequent the Vans Warped Tour, but this is exactly how I picture it: tons of teenage bodies flailing about. They didn’t seem to care what song the band played.

It is amazing how much sound comes from Against Me! When the band launched into “White People For Peace,” the noise of an army exploded from the stage. Gabel stood stage right, veins standing out in his throat, knotty cords of passion. Though the set mixed songs from throughout the band’s five year career, the songs from New Wave positively killed. “Up the Cuts” and “Stop” came off as energized, angrier versions of the album cuts and “New Wave” took on a new urgency.

Though part of me ached to join the pit (I couldn’t out of fear my glasses would be destroyed), there is something about bumping into shirtless, sweaty guys that is just a little too-over-the-top for me. At other pits in which I’ve taken part, the crowd had been more gender neutral, but here it was all about shirtless dudes. From my vantage point, there was some irony in the blending of machismo with homoeroticism. And speaking of homoerotic, guitarist James Bowman took over Tegan Quin’s vocals on “Borne on the FM Waves of the Heart,” to turn a duet with Gabel into a sweet bromance.

By the time the band finished a sweaty first set with an astonishing “Thrash Unreal,” waves of exhaustion bristled over the crowd. Gabel had paused for a moment and passed out about 10 bottles of water to the sticky crowd. Is compassion the antithesis of punk? I think not. The aim of a mosh pit never really is to hurt anyone. I learned that back when I was 16. Maybe next time I will jump in, glasses and all.