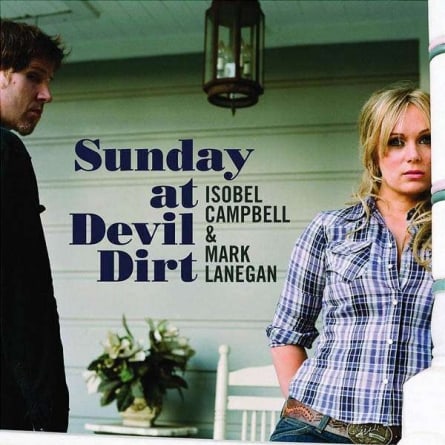 Mark Lanegan, R.J. Reynolds’ single greatest contribution to society and host to personal demons darker than any average music fan may know, has spent the last few years keeping himself mighty busy. From his partnership with former Afghan Whig Greg Dulli, to his sporadic appearances on Queens of the Stone Age records, Lanegan brings his satisfying, smoky earthiness to whatever music he graces. Lanegan is the bacon of rock ‘n’ roll; he makes anything taste better.

2006 brought the release of Ballad of the Broken Seas, a collaboration between Lanegan and Isobel Campbell, a founding member of Belle & Sebastian. Recently estranged from her fellow twee Scotsmen, Campbell was working on material of her own she hoped would be performed by a male baritone. Eventually finding that muse in the former Screaming Trees frontman, the two set about working on material via FedEx; Campbell would record tunes in Scotland and send them to Lanegan in his adopted home of Los Angeles where he’d sing, write a few lyrics, and eventually drop his work in the mail. Eagerly awaited by Lanegan fans, rabid for recordings by the man, Ballad proved to be a singularly captivating release, drawing comparisons to the yin and yang duets of Lee Hazlewood and Nancy Sinatra in the late 60s. Amid Campbell’s often gentle British folk balladry, the album yielded a classic version of Hank Williams’ “Ramblin’ Man,” a song that will go down as one of Lanegan’s finest moments.

Sunday at Devil Dirt comes forth as the duo’s second album, yet their first together in the studio. The record here is not comprised of duets, exactly. It should instead be considered as a Mark Lanegan record written and arranged by Campbell. This approach makes this record, with its stronger songs, a sort of strange, right-brained mirror image of Lanegan’s early solo records, with Campbell even using Lanegan’s own metaphors and images across several songs (Babylon burning, mockingbirds, the heartsick sailor of “This Lullaby”). The Lanegan of 1993’s Whiskey for the Holy Ghost was self-loathing and addled, singing about the cycle of self-imposed heartache he thought he’d never break, whereas Devil Dirt’s Lanegan is a wizened, wise and possibly in love. Make no mistake, there is heartache in these songs, but both Campbell’s writing and girlish whispers provide a balance that adds an uncanny emotional depth to Lanegan’s sinister rasp. On this record, when we hear him sing, “You’d be the reason / Something to believe,” we believe, with him, that all the psychic scarring from bad love and bad self-love is really no match for a true love, or as he sang years ago, “Something good.”

The only times when the record shows a weakness is when the material sounds like a Campbell song that should have been relegated to a solo release. When one is familiar with Lanegan’s catalog (“Shooting Gallery,” “Methamphetamine Blues,” “Hit the City,”), hearing him sing about damsels in “The Raven” can induce a cringe. “Seafaring Song” and “Who Built the Road,” with their stately strings screaming British-ness remind one of Nick Cave’s ’90s work that, in his case, was often carried by the arch melodrama of his lyrics. Here, the songs sweep in like low-hanging clouds that, once burned off by the sun, are easily forgotten.

In the case of Devil Dirt, that sun is the second half. Following the bad voodoo workout “Backburner,” Campbell’s best songs come, one right after the other. She takes her one solo turn with the sleazy “Shotgun Blues,” Lanegan not present on the track except for an almost tangible smirk somewhere in that dirty slide guitar. “Keep Me in Mind, Sweetheart” exists somewhere between Lanegan’s tender reading of “Consider Me” and his embittered “Don’t Forget Me.” The true magic of the record, however, comes on “Something to Believe,” possibly the gentlest song Lanegan has ever recorded. Campbell’s deceptively simple guitar skips along while Lanegan, who has growled, moaned and groaned at death’s door, sings to someone who might be his last hope for affirmation. The naked beauty of the song suggests that the weary Ramblin’ Man may have met his reason to keep on keepin’ on.