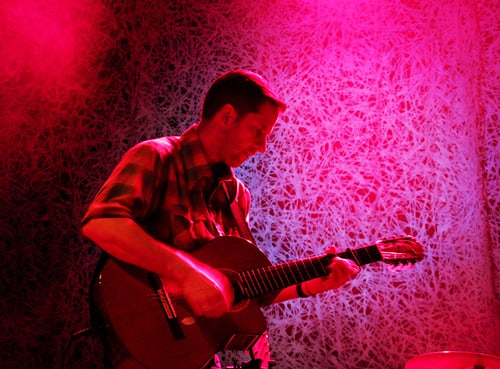 On Sunday nights in St. Louis, people tend to shut it down early, even more so when it’s freezing-ass cold like it was this particular night. A bit of grousing about the completely hapless Rams, asking a random stranger where he went to high school, and incredulously still pondering how the hell Ralph Nader received 17,000 votes in Missouri, and it’s time to call it a day. Anything on top of that is just too much.

With some exceptions, Sunday night concerts in this town also seem to reflect this malaise; after all, it is a work night. Sure the hardcore musos still turn out in force and stare mesmerized at their musical heroes, but casual fans that might be more inclined to see a show on Friday or Saturday seem to bunker down at home on Sunday nights.

Consequently it was nice to see the capacity turnout for Calexico’s show at the Duck Room on a Sunday. Essentially a cold basement that would bear a disturbing similarity to the stage design for Samuel Beckett’s Endgame were it not for the stuffed, framed and mounted ducks that line the walls; what the Duck Room lacks in acoustics it more than makes up for in intimacy. At capacity (or in this case, what seemed like damn near over capacity) it’s a tight squeeze for both musicians and fans alike, but when the band is on and the fans are receptive and not solely focused on double-fisting Bud Lights, it ranks among the top music venues in the city.

With the majority of concertgoers bundled up in heavy coats or ratty but ever-so-indie hoodies, Calexico tore through a set that drew heavily from latest release Carried To Dust, with a few older songs and cover tunes added to the mix. It was a sweaty, raucous, and damn loud show; the ringing in my ears still hasn’t faded and I kept hearing mariachi horns when stuck in traffic this morning.

On record, Calexico tends to be very polished, textured and carefully crafted, with melodies woven into the songs that reveal themselves slowly with multiple listens. This isn’t a knock or criticism by any means; at their best there are few bands that can evoke specific locations, moods, or atmospheres the way Calexico can. Yet at the Duck Room they were a whole different beast: rough around the edges, the band approached the songs with a palpable aggressiveness largely absent from their albums. Songs like opener “Quattro (World Drifts In)” “Bend In the Road, and “House of Valparaiso” incorporated the trademark Calexico sound, but were just more manic and frenzied than their album versions. “Guero Canelo” was reworked as well, foregoing its somewhat over-produced album version for something far more jagged and loose.

Though a few downbeat songs were thrown in, probably to temporarily relieve our throbbing eardrums – the country roll of “Slowness” and a languid “Fractured Air” were particularly soothing – the show’s best moments came when the band was pounding away on their instruments. A few covers were also given this treatment. Two Minutemen songs that have frequented the band’s shows for years – “Corona” and “Jesus and Tequila” – were played at breakneck pace, though sadly, only a few brave souls earnestly pogoed. “Victor Jara’s Hands” segued into a few verses of the Bob Dylan groaner “Silvio.” Who knew that Calexico could make that song bearable?

For the most part the sound was good, though Joey Burns’ vocals on “Two Silver Trees” and “Writer’s Minor Holiday” were mostly inaudible. Still that’s about the worst that could be set about this particular show. Although the many people raving at the show’s conclusion that it was the best concert they’d ever seen can at least partly be attributed to semi-drunken post-concert euphoria, it was still a memorable and exciting show. Even if it was a work night.