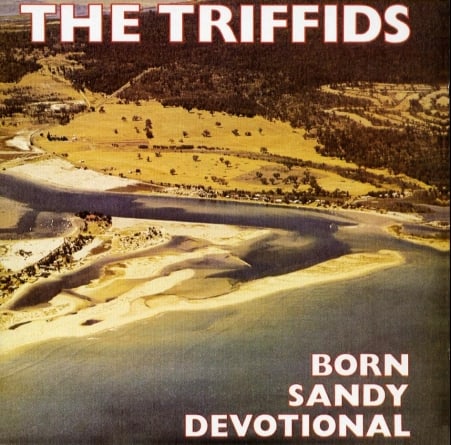 It starts with a suicide and ends with a man not wanting to drink alone. In the space between, the songs on the Triffids’ masterpiece Born Sandy Devotional explore themes of violence, death, commitment, faithlessness and isolation set against the desolate backdrop of the band’s native Australia. Drifters and drunkards, wronged by love, hurtle through the darkness of night pulsing with, and comforted by, thoughts of revenge.

First the boring technical details: At the time of the album’s release in March 1986, the band consisted of Graham Lee (steel guitars), Martyn Casey (bass), Jill Birt (vocals and keyboards), Robert McComb (violin, guitar, and backing vocals), Alsy MacDonald (drums and backing vocals) and David McComb (lyrics, lead vocals, guitar, and occasional keyboards). The album was recorded in London and mixed in Liverpool. For those keeping score at home, it peaked at number 37 on the Australian charts, and, for some bizarre reason, scored even higher on the Swedish charts. Hell if I know why.

David McComb, who wrote all the album’s lyrics, still remains one of music’s more unheralded, fascinating, and, ultimately tragic, front men. Throughout this life he suffered from chronic back pain and addictions to a whole host of substances, including alcohol, amphetamines and heroin; his alcoholism was likely the catalyst for the heart condition he eventually developed. By all accounts, a heart transplant in 1996 still didn’t cause McComb to scale back his drinking or drug use. In 1999, long after the band had split up and while McComb kept on with various musical projects, he was involved in an automobile accident and died a few days after being released from the hospital. The official cause of death was attributed to heroin and mild rejection of his transplant. McComb was only 36.

In various interviews McComb talked frequently about the autobiographical nature of Born Sandy Devotional; certainly it’s tempting to see the album as McComb confronting and variously exorcising, accepting, or denying the sordid and messy details of his own life. But this also implies that the album is obtusely introspective or inaccessible, which it isn’t. The various emotions expressed in these songs, most of which are ugly, bleak, and exceedingly dark, are usually addressed in narratives that do not limit themselves to a particular time, place, or person. Though both McComb and the rest of the band were clearly influenced by their homeland- the album is dotted with references to Australian locales, and the album cover depicts the west Australian city of Mandurah circa 1961 – the album’s lyrics and music are not bound by that geography.

McComb once described Born Sandy Devotional as “following the idea of fidelity as a complete all-consuming faith.” It’s an interesting characterization, since most the album focuses on what happens when that fidelity is shattered. Nearly every song deals with relationships on the skids that are well past the point of either reconciliation or simple acceptance.

In these songs, the primary options are suicide, drinking to the point of numbness, ranting lunacy, or sweet revenge. Opening track “Seabirds,” with its gorgeous melody and prominent strings, vividly chronicles the death of a man at the end of his rope, unable to find comfort in booze or the “total stranger lying next to him” in a ratty motel room bed. The man swims out to a reef and presumably jumps to his death, alone but for the impassive birds nearby: “They could pick the eye from any dying thing/ That lay within their reach/ But they would not touch the solitary figure/ Lying tossed up on the beach.”

Other characters descend into batshit craziness. We never find out if the disturbed gun-toting maniac of “Chicken Killer” is even aware that the girl he’s searching for “caught death as only lovers can ever catch can.” Instead, he rants and rages as he searches for a girl who’s clearly not going to be found north of the cold hard ground: “I ran through the crowd calling out your name/ To the blind the deaf the dumb the lame/ But they shook their heads and pointed to the sky/ Saying she’s in His Hands now my boy.” The driver in “Lonely Stretch” finds himself lost in a barren landscape, heavy with menacing vibes and a declining grasp of reality. Lost where “land was so flat, could well have been ocean/ no distinguishing feature in any direction,” the driver is prone to hallucinations and drives aimlessly as he broods about a woman and realizes “you could die out here from a broken heart.”

For McComb’s characters who aren’t interested in offing themselves or howling at the moon, offing someone else is a viable alternative; the possibility of retribution keeps these tormented souls going. The mostly gentle instrumentation and McComb’s baritone voice in “Wide Open Road” betray the violence foreshadowed by its narrator. It’s a picture of man gearing up for payback. Disconnecting himself from his personal connections (“I lost track of my friends, I lost my kin/ I cut them off as limbs“) and coping with a fractured psyche (“Drums rolled off in my forehead/ And the guns went off in my chest“), he’s got his eyes on a very specific prize before he keeps on down the road: “I drove out over the flatlands/ Hunting down you and him.”

These various themes are most clearly woven together on “Stolen Property,” perhaps the album’s most startling, emotional and complex song. It’s a devastating track with a funereal mix of keyboards and jagged strings, unflinching in its sense of despair, regret, anger and loss. What emerges is ostensibly a portrait of a man evaluating how little he’s accomplished in life as he struggles to cope with being alone:
You just lie around waiting on a signal from heaven
Never had to heal any deep incision
Darling you are not moving any mountains
You are not seeing any visions
You are not freeing any people from prison
Just an aphorism for every occasion

The song ends without resolution; McComb doesn’t let on whether the man will choose a self-inflicted ending like in “Seabirds” or pursue revenge as in “Wide Open Road.” What’s clear though is that he’s worse off than before; the consolation that “she don’t belong here anymore, learn this the hard way” is particularly sarcastic and biting. Like most of the songs, a violent ending is implied – “Pick yourself up! Hold yourself up to the light!/ Duck your head! Watch for the blade!” – though the target itself remains unclear.

The album isn’t entirely dark. The country-tinged “Estuary Bed” implies a sense of devotion, and album closer “Tender Is the Night (The Long Fidelity)” is the most romantic and sentimental song on the album. Sung as a duet between McComb and Jill Birt, it’s a mostly uplifting ending to the album, though the “gentle young man” described in the song has aged “years before his time” and his attraction to the woman is at least partially based on the fact that he doesn’t’ want to drink alone again.

Over 20 years on from its initial release, Born Sandy Devotional remains one of the music’s true underappreciated albums. The lyrics are exceptional and moving, with recurring images that link the songs together. Coupled with McComb’s evocative voice, the music is immediate and timeless and covers a wide spectrum of musical styles, whether it’s the symphonic qualities of “Seabirds,” the rolling keyboards of “Personal Things,” or the sheer mad swirls of noise and howling echoes throughout “Lonely Stretch.” It’s an album of starkness, violence, beauty and death. Epic in scope and flawless in execution, it remains the Triffids’ finest moment.