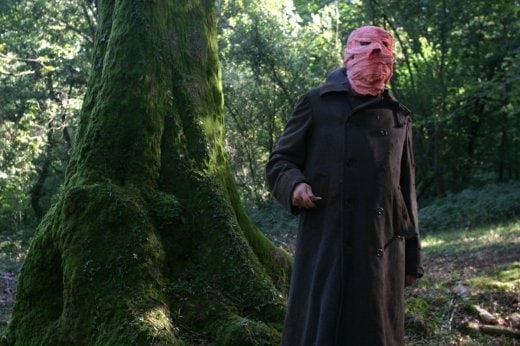 December and January are both months that I traditionally look to for thrills at the multiplex; studios tend to unleash their best and most Oscar-worthy at this time, but I have found 2008 to be quite the underwhelming year at the movies. Of course, there are a plethora of films I have yet to see (Milk and The Wrestler), but the most lauded have already left me cold (The Curious Case of Benjamin Button and Revolutionary Road). Leave it to a low-budget Spanish flick about time travel to get me excited about going to the movies again.

The relationship of voyeurism and the movies is age old. Hitchcock explored it best with Rear Window. It is human nature to watch and what better to watch than tragedy and drama strike the lives of others. While this conundrum, the responsibility of the viewer, has been examined before, never has it been fused with a yarn about time travel as in Timecrimes, a thrilling ride of a film that twists this question around until it is ourselves we are watching. Suddenly, the act of voyeurism is not quite as passive.

Nacho Vigalondo’s film begins quickly as a middle-aged couple are relaxing on lawn chairs in their backyard. Hector (Karra Elejalde) produces a pair of binoculars and scans the woods beyond his home. He suddenly spies a young girl removing her shirt. Just like Hector, we enjoy this impromptu striptease, but when he goes into the forest for a closer look, Hector is terrorized by a bandage-wrapped apparition wielding a pair of scissors. He then hides in a nearby laboratory where he is inadvertently sent back in time. Or is he?

See, Hector is transported back only a few minutes before his previous self ventures off into the woods. In order to survive, he must make sure events are repeated exactly as before, lest he vanish like the images in Michael J. Fox’s photo in Back to the Future. Unfortunately, Hector is not as cuddly, nor intelligent as Marty McFly. Via attempts to escape or watch his other self, Hector risks becoming a causality of the breaking down of the time-space continuum. Soon, there are three Hectors running about, each one layering a different perspective on the film.

But Timecrimes adheres to the philosophy that the future is already written and despite Hector’s attempts to repair his errors and save the life of a loved one, it is all in vain. But there lies an interesting question: is an action a crime a second time if it has already been committed in the same time and place? While forcing an innocent woman to disrobe, is Hector guilty of the crime once again, even if this event happened on a different layer of time?

Such moral questions are the fabric of Timecrimes. As the plot coils in on itself and concrete questions are answered, more abstract ones are created. There is not a dull moment in the film and as it speeds along to its chilling climax, we can do only one thing. Watch.