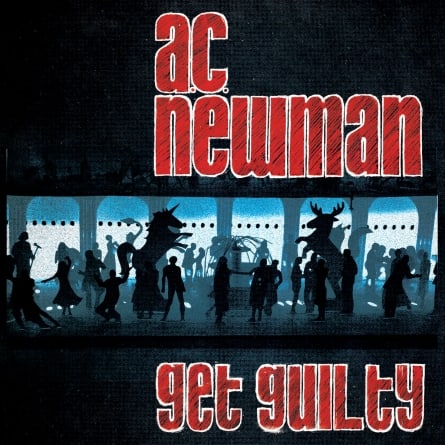 When the frontman of an indie band with a trademark style refined and polished over the course of several releases staggers out of the gates for a solo album, the temptation is to view such a release as little more than a vanity project. Is it fair? Of course not, but it makes for an easy starting point and potentially some obnoxiously lazy music journalism. For A.C. Newman, that reference point is indie juggernaut the New Pornographers, who on albums like Mass Romantic and Twin Cinema have developed their own unique brand of catchy and infectious indie pop. Just ask University of Phoenix.

Get Guilty is the second solo release from Newman. Recorded in the summer of 2008 at Brooklyn’s Seaside Lounge and featuring contributions from John Wurster (Superchunk/Mountain Goats), Mates of State and Nicole Atkins, the album is unique enough to distinguish it as something more than an incidental one-off side project. Though the musical arrangements, vocals and production techniques are sometimes overly reminiscent of the New Pornographers, overall it’s a solid album that includes enough variations to set it apart from Newman’s work with the band.

Of course, these similarities to the New Pornographers aren’t necessarily drawbacks; some of the songs that mine the band’s up-tempo mix of guitars, keyboards, drums and backing vocals are catchy as hell. Newman clearly knows how to write and record memorable singles, even if none of these songs will ever get a whiff of mainstream commercial airplay. Songs like opener “There Are Maybe 10 or 12,” “Changeling (Get Guilty),” “Prophets” and “Submarines of Stockholm” wouldn’t sound out of place on a New Pornographers record. Accusations of potential complacency aside – Newman certainly isn’t trying to create a new musical language or deal in wild experimentation on Get Guilty – most of the album’s songs are well crafted enough to excuse any excessive similarities to his work with the New Pornographers.

Nevertheless there are several subtle stylistic differences that become more apparent after multiple listens. In general, Newman’s vocals sound more up front in the mix and less treated than usual; when his voice isn’t layered, it actually carries some emotion, in particular on “There are Maybe 10 or 12,” Young Atlantis” and closer “All Of My Days and All Of My Days Off.” The album also moves at a more relaxed pace than most New Pornographers songs, with the songs also being given more breathing room to develop. Whereas sometimes the New Pornographers can drown their songs with layers of instruments – with mediocre recent album Challengers being a frequent offender – Newman instead emphasizes individual instruments this time around. “Prophets” begins with a sparse piano and acoustic guitar, “Changeling (Get Guilty)” is built around a nice piano melody and punchy background vocals, violins mark the beginning of “Young Atlantis, and “Like a Hitman, Like a Dancer” uses acoustic guitars to create a driving, insistent rhythm.

Though Newman’s lyrics sometimes tend to be somewhat obtuse and open-ended, a wry sense of humor and self-deprecation surfaces on some songs. “I will die with my foot in my mouth,” Newman deadpans at one point. The opening song can be heard as either mocking or playful as it promises some helpful advice, but with a catch: “There are maybe 10 or 12 things I could teach you/ After that well I think you’re on your own/ And that wasn’t the opening line/ It was the tenth or the twelfth/make of that what you will.” Other songs (specifically the album closer) are heavy on romantic sentiment; thankfully, these songs aren’t maudlin and the nausea quotient remains low.

For the most part, Get Guilty doesn’t really find A.C. Newman wandering too far from his comfort zone. Its style and vocal arrangements are mostly familiar, though there are some subtle shifts that those with sensitive ears will notice. Even so, Newman’s ability to write catchy songs with recurring but not overly bombastic hooks hasn’t diminished in the least.