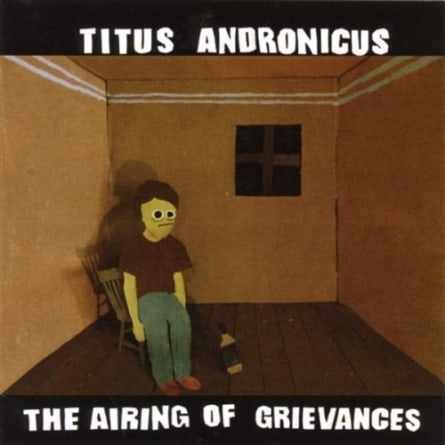 The Airing of Grievances

Taking their name from one of Shakespeare’s bloodiest plays -not from a porno queen – Titus Andronicus’ debut effort The Airing of Grievances was an unrelenting and pounding album that played like repeated jack-booted kicks upside the head. Upon its original release on the Troubleman Unlimited label in 2008, it received effusive praise from a decent number of fans and critics. Violent, nihilistic, and exceedingly bleak, it was one of the year’s most austere and uncompromising albums. With cultural references ranging from their hometown of Glen Rock, New Jersey to Albert Camus, Greek mythology, and Flemish painters, as well as containing enough existential dread to rival Ian Curtis, it was one of the year’s most viscerally jarring albums. Now remastered (bullshit unless you have ears with the sensitivity of a bat, but no matter) and reissued by XL Recordings, indie music fans or those woefully angst-ridden suburban kids who are not yet familiar with the album have another chance to discover it.

Though the vocal traits of lead singer Patrick Stickles have been compared to Conor Oberst, to my ears he sounds closer to a more riled up cross between Paul Westerberg and David Yow. The vocals throughout Airing are tinny, muddy and occasionally indecipherable, with Stickles variously screaming, shouting and yelping above the band’s manic playing. The lyrics are extraordinarily dark, often vacillating between moments of righteous anger, fuck-it-all boredom and morose brooding about mortality.

Opening track “Fear and Loathing in Mahwah, NJ” references Hunter S. Thompson’s well-known novel as Stickles lobs his first grenade of the album: “Should the shit hit the fan, I just pray you will not be spared.” On other songs Stickles sounds completely resigned and tired beyond his years. This monotony is acknowledged in the almost-melodramatic “No Future Part 1,” with Stickles commenting that “I know that I say this every night/ But I don’t think I’ve ever been so tired of life.” And if this emo sentiment somehow escapes the listener’s notice, Stickles drives the point home later in the song, cheerfully saying that, “This world seems like a nice place to visit/ But I don’t want to live in it.” On Airing such boredom strolls hand-in-hand with mordant comments about the meaningless of life.

The song’s arrangements prevent these lyrics from reading like the overwrought work of a freshman Intro to Philosophy student who doesn’t realize how miserable he is until Camus tells him so. Many songs begin deceptively quiet and almost acoustic in nature, but eventually dissolve into something far more sinister and jagged. The album begins with a simple guitar, before the gates are blown open and the song is swallowed up by swirling pianos and horns. This pattern is repeated often: “Joset of Nazareth’s Blues” begins with a harmonica line reminiscent of Bruce Springsteen, but is soon jackknifed by Stickles’ strained vocals, while “No Future Part 1” starts with an atmospheric rhythm that is eventually suffocated by the band’s frantic sound. The arrangements are varied and expansive, evocative of many disparate musical trends without being derivative .

The band’s home state of New Jersey is referenced several times and is used to accentuate the album’s agitated and claustrophobic tone. Or, more accurately, the blue-collar, hardscrabble, industrial shithole image of the state that’s been depicted in everything from the poetry of William Carlos Williams to the music of Springsteen to every “Cops” episode that seems to take place on the dingiest streets of Passaic. As listeners we’d probably be having a hardy, cynical indie laugh if these songs were written by a bunch of Abercrombie-clad rebels from Bel-Air. But with New Jersey as the backdrop – especially in lyrics that reminisce back to childhood, presumably before things got even more horribly derailed – the album’s utter desolation is entirely believable.

The Airing of Grievances deals heavily in the dark stuff. Even its few instances of humor are meant to be taken with a mournful shrug, not a wry smile. Of course, the fatalistic ethos that runs through many of its songs isn’t anything new in music. Where the album ultimately succeeds, and what makes it so compelling, is in its ability to convey this ethos without sounding laughably over-dramatic.