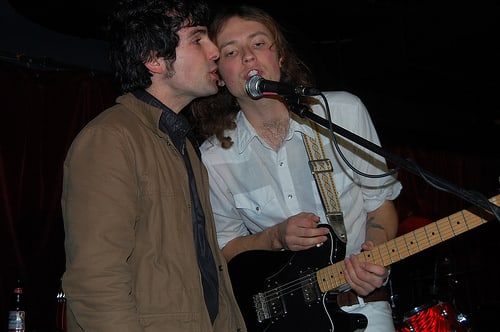 Despite my habit of either getting lost immediately prior or just after a show, I managed to arrive at Portland’s Wonder Ballroom just before the first opener, the Parson Redheads came on stage. The Wonder Ballroom is always reminiscent of a high school gymnasium tricked out for a party and this particular evening was no exception; I suppose the drinkers being roped away from both the stage helps.

Now, in interests of full disclosure, I admit I am an avowed fan of the Parson Redheads and have a tendency to gush on their many merits. Fortunately, their set only proved everything I’ve ever said about them; while they were short a keyboard player on this tour, Evan Way and company are simply wonderful live. The soft, dreamy strum of “Time is Running Out” slowly became a thumping harmonic nostalgia trip, while the wavering opening distortion of “Out to Sea” suddenly shifted into a hook so catchy that I’m still hearing it days later. From where I was standing, I could see mouths throughout the entire crowd following every lyric silently to themselves. The highlight of their set, though, was undoubtedly their cover of Neil Young’s “From Hank to Hendrix” with help from a few friends, including Eric Earley (of headliner Blitzen Trapper). At that point, there was an eight-people harmony filling the Wonder, all the Parsons dressed in their customary white and a huge smile across my face.

There was a brief intermission before the next band, Portland’s own Starfucker, started their set and I confess my focus wavered. The trio didn’t really deserve my lack of attention, but nor did they draw me in the way the other two bands would that night. Josh Hodges, Ryan Biornstad, and Shawn Glassford all put in commendable performances that night and I recall looking over the stage and thinking “Are there really two drummers and a turntable at a rock show right now?”, but in the cold light of day, I can’t recall any individual songs. I’m probably not in the Portland majority, though, because almost as soon as they hit their opening notes, the floor flooded with people.

Blitzen Trapper was who we all came to see, and damn if they didn’t put on a show. I had managed to squeeze up to the front of the crowd by that point and had an unobstructed view of the entire six-piece band scattered across the stage. Fortunate, as the entire venue was packed tight by now, from the stage to the balcony to the quickbars. Vocalist/guitarist Earley was almost painfully earnest for the entire set, alternating between his guitar and a keyboard. Their gothic murder ballad “Black River Killer” bordered on the nearly inconceivable genre of roots-funk, all made wonderfully creepy with lyrics like “It was just a little while past the sunset strip/ They found the girl’s body in an open pit/ Her mouth was sewn shut, but her eyes were still wide/ Gazing through the fog to the other side.” I get the feeling that Blitzen Trapper is trying not to be pegged as one of the roots-revival, Band-aping rustic rockers you read so much about these days, but they’re just so good at it.

Much of their set was off their latest album (and Sub Pop debut) Furr; in particular, their live rendition of “Saturday Night” was wonderful piece of pop. It must be difficult to make a lyric like “Jump down, turn around/ Shake it on a Saturday night” sound significant at all, but they take fair shot at it. The centerpiece of Blitzen Trapper’s performance was most definitely “Not Your Lover”, also from Furr. It’s a confusing and staggeringly beautiful love (or maybe anti-love) song; Earley’s quaver adds a trembling poignancy to lines like “When I’m awake, I’m yours, and I’m stickin’ ’round/ I’m gonna walk on down your shores/ But, in my sleep, I’m not your lover anymore.”

I managed not to get lost again on the way back home (this time on a borrowed bicycle in cold December midnight) and slept deeply, my head filled with vision of Oregon killers, lovers on shores and strange furry children. Now that’s a good show.