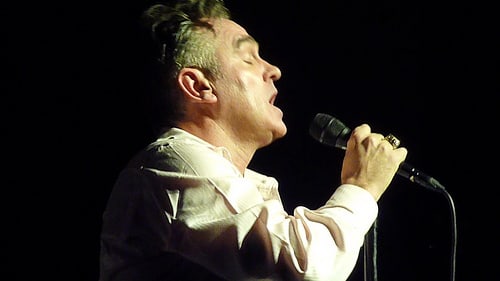 “I just have one soul-searching question for you . . . (this is Morrissey speaking and my mind very nearly implodes at the possibility of a soul-searcher). . .where am I?” Very existential of him, but the Moz leaves little time for consideration; the band breaks into a much-punked-up version of “This Charming Man,” and the extremely sold out Webster Hall crowd is putty in the man’s well-manicured hands. Particularly the drunk German standing next to me, who took every in-between song opportunity to scream “MORRRIIIISSEEEEEYYY” and as far as I could tell, never uttered another word. No matter; everyone was in good spirits for a set that covered every era of Morrissey’s two and half decade career and bristled with verve, energy and wit.

It seems pretty obvious (if maybe a bit unfair to his latter-day accomplishments) to say The Smiths-era is Morrissey’s best work. But hey, he’s never shied from the past, and he played a handful of choice Smiths cuts at this show, even whipping out b-side “I Keep Mine Hidden,” the last track the band ever put to record, a bouncy number in the vein of “Panic” and “Frankly, Mr. Shankly.” There were also faithful renditions of “How Soon is Now?” (sounding as heavy and awesome as ever), “Ask” and “Death of a Disco Dancer.” While Morrissey’s current backing band may lack Johnny Marr’s subtlety, they make up for it with muscle. These songs sounded more like a rock band than Morrissey ever has before – aggressive, vigorous and brisk. His recent material shines under the approach, particularly the brand-new tracks from Years Of Refusal, the most solid album of his recent “comeback” period. Most of the newer songs in the set were from Refusal, and they sounded big and fresh live, particularly standouts like “Black Cloud” and “I’m Throwing My Arms Around Paris.” The better tracks from You Are the Quarry benefited from the rock n’ roll treatment too; “Irish Blood, English Heart” should have been this insistent on record, and “Let Me Kiss You” was sweeping and romantic where the album version was flat. Some of the songs could have used more of that re-imagining in fact, the deep cuts from Refusal (“Sorry Doesn’t Help,” “I’m OK By Myself”) tend to be bulbous in length but not in ideas. The protracted downturn killed the momentum toward set’s end, and people started to actually patronize the beer vendor who’d been awkwardly pushing through the crowd baseball-stadium style all night.

Morrissey is a dynamic presence on stage, much like in his songs. He shot off quips with trademark wry humor, at one point asking the audience for permission to play on the Ellen DeGeneres show, and even tossing one of his sweated-through shirts to a hopefully deserving spectator. (The guy changed shirts probably four times throughout the night, at one point reappearing and declaring “Greetings – I’m Morrissey’s understudy.”) He’s toned down his stage moves since his Smiths days, here mostly throwing the mic cord around as if he’s fascinated by its buoyancy, or making irreverent hand gestures. A bit of grown-up sophistication fits the Moz though; where his spic-and-span look used to seem anachronistic, the open-collared shirts and gold necklace hang off him with aging-lothario ease (Morrissey? Lothario? Yeah, I went there).

Most impressive is his ability to remain aloof while being completely sincere, absorbed by his status as Icon while apart from it, winking at it. It’s easy to see why people are obsessed with the guy. He lays everything out in his lyrics – all his despair, loneliness, frustration, with that famous literary intelligence and sardonic wit. But as an actual person he retains an alluring shade of mystery. Morrissey, of course, is completely aware of this and plays it up to full effect. Whatever the embodiment of Morrissey actually is, figuring him out has become something of a mutual game between audience and artist, Morrissey throwing out little quips that could mean something or nothing, and everyone in the audience making them both. Perhaps the man himself said it best when after introducing the band, he finally got to himself: “And I,” quoth the Morrissey, “I am a myth.”

This Charming Man
Billy Budd
Black Cloud
How Soon Is Now?
Irish Blood, English Heart
Let Me Kiss You
I’m Throwing My Arms Around Paris
How Can Anybody Possibly Know How I Feel?
Seasick, Yet Still Docked
The Loop
I Keep Mine Hidden
One Day Goodbye Will Be Farewell
The World Is Full Of Crashing Bores
Mama Lay Softly On The Riverbed
Ask
Best Friend On The Payroll
Death Of A Disco Dancer
Sorry Doesn’t Help
Something Is Squeezing My Skull
I’m OK By Myself

encore:
First Of The Gang To Die

This author has not added a biography. Meanwhile Bryan Kerwin has contributed 8 posts. Click here to view them.