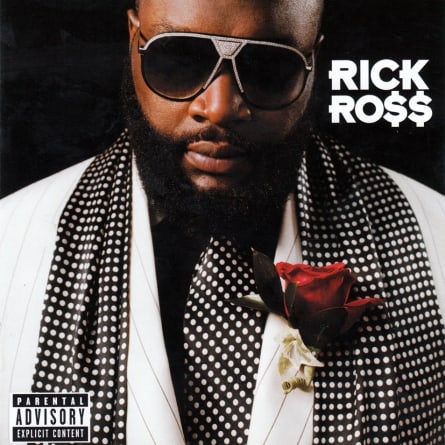 Rick Ross is a boring rapper. Some people would even say he’s fucking wack. If you took one look at Ross, or one of his music videos, you could probably guess what he sounds like with startling accuracy. Like many rappers before him, Ross’ reputation precedes him. Ross has made his career rapping about drugs, women and money, but in recent years he has been outed as a college football player who worked as a corrections officer in Florida. Ross’ latest opponent, 50 Cent, has interviewed his ex and got her to confirm this fact.

Ross has made a career out of repeating himself; track after track, on overlong albums filled with speaker-shattering bass, repetitive hooks and basically the same phrases about money and power that you could build a drinking game around. If you so dare to take a shot every time Ross has said something like “My money long, my money strong” throughout his career, including latest album Deeper than Rap, you would be dearly missed. Lyrically, Ross has always been criticized for being unwavering, such as his constant fallback of rhyming words with themselves, as in his first big hit, “Hustlin,” where he rhymes “Atlantic” with itself.

Ross’ first two albums, Port of Miami and Trilla, were obnoxiously sun-drenched, bass-heavy anthems to Maybachs, stacks (both white and cash) and the Miami bass sound that he and so many rappers grew up listening to. On Deeper than Rap, Ross doesn’t break any new lyrical ground, nor does he dig himself deeper; the album’s biggest attribute is how smooth and dark it is. John Legend’s cut, “Magnificent,” the first single off the album, shows a different sound to Ross and is an admirable attempt at capturing Ross’ Boss persona coupled with his hood upbringing. With its piano-driven melody, it would sound more at home on a John Legend album. After a verse about playing pawns to Queens, he reminds the audience he still wears white tees and Nike Airs. Brooklyn’s own Nas is featured on “Usual Suspects,” where he manages to slightly outclass Ross on his own track. Despite his flirtation with mediocrity, Ross has a commanding presence. His voice leaps from the track, and even if he isn’t saying anything particularly fresh, it makes you want to listen. Ross shows some northern exposure while referring to himself “as bigger than Biggie/ Bitch I’m bigger than you” on “Yacht Club,” the song the Lonely Island would have written if they were a legitimate rap group, with its Jamaican reggae-tinged beat.

The album’s real standout, however, is closer “In Cold Blood.” Produced by The Runners, the team who did “Hustlin,” the duo crafts a menacing, downright intimidating sonic landscape that Ross’ lyrics blend with to create a terrifying experience. Not since The Clipse’s “Chinese New Year” has a song truly been this chilling.

Deeper than Rap, however, just isn’t new and exciting enought. “Murda Mama,” a duet with real-life lover Foxy Brown, falls flat under the clichéd, bass-driven and by-the-numbers beat and tired references to “’09 Bonnie and Clyde,” with Foxy Brown trading verses that sound like they came out of a fashion catalog.

Where Deeper than Rap really succeeds is when it proves the Miami sound is tired. The album has a real New York vibe to it, the kind started by Illmatic and Only Built 4 Cuban Linx… From the comparisons to B.I.G. to the dancier, catchier, less assaultive production, and even the inclusion of Nas, Ross and his producers trade in the bass-heavy thumps of Miami luxury for a denser, Gotti-tinged production that really gives some standing to Ross’ lap of luxury. “Rich Off Cocaine” eschews the traditional 305 sound, and the breezy production better captures the fresh Florida air filling the back of a Maybach then anything Ross’ previous efforts could.

With Deeper than Rap, Rick Ross has proven that although he is lyrically limited, he can still command respect. He still reminds the listener on every track that he is, in fact, The Boss, and by the time “In Cold Blood” fades out, in his words “you never could have imagined it/ Living with paralysis/ Shoulda checked your rear view/ Made a better analysis.” Better duck.