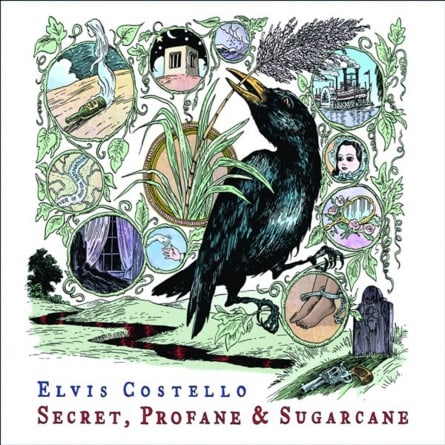 Elvis Costello’s legacy project has been one of those bizarre reversals of fortune in recent times. While his early years were marked by brilliant studio efforts and occasionally lackluster performances, his career since the late 1990s has been the exact opposite. By putting away his snotty bitterness, his live dates have become fantastic but, almost on cue, his records have also become staid and seemingly anchorless affairs. Coupled with this renewal in spirit has been a semi-annual itch to stretch himself past the crafty sledgehammer pop that brought him to the dance. When it comes to bending genres he’s at home, but while attempting to isolate one, problems usually arise.

For a lot of people on this planet nothing is as grating as Costello’s voice where it doesn’t belong. Admittedly, I’m one of those fans who bangs his head against the desk every time I hear Costello is dabbling in Americana; in this case, he dabbles in jazz, folk, country and bluegrass on Secret, Profane and Sugarcane. So what keeps our breed coming back to these overly ambitious ventures: the two times he got it right by smearing his troubled young man pathos all over Almost Blue and King of America. So the prospect of Costello trying his hand at making a record again with T-Bone Burnett, the man who produced the latter album, hooked me on the idea that I could give our bespectacled addict one more chance after 20 years of misfires.

And you know what… it’s not bad. Yeah, I’m just as surprised as anyone that this isn’t another bookstore display ornament for All Songs Considered listeners. But it humbly succeeds, mostly because Burnett and Costello have kept things simple and refrained from glutting their project with kitschy clichés. True, Costello’s songwriting has the air of a stuffy music ethnographer; more than once you can spy him attempting to say anything and everything about Appalachian songs and culture with a scholarly sort of detachment. Fortunately, his musical choices and newfound enthusiasm betray this giddy intellect. In fact, the worst thing I can say about his performance is that Costello gets overly excited and makes these songs way too loud during some of the choruses. This is most glaring on “How Deep is the Red,” which flails to its conclusion with acidic wailing. To be fair though, things are normally much more pleasant here. “Complicated Shadows” is re-recorded as a subdued holler and stomp and maintains a good strut while staying the route of the classic man in trouble songs Costello knows only too well. When he practices restraint and tenderness on the dance hall swaying of “I Dreamed of My Old Lover” and “She Handed Me A Mirror,” his fortunes fair pretty well and he matches the same rhythm and sincerity of King of America’s strongest tracks.

While it’s a worthy follow-up to that album, it’s also a lesser one in a handful of ways simply because Burnett and Costello get a little too insistent on practicing a traditionalist bent. Often we’re dealing with four or five-stringed instruments without any additional backup, something that focuses Costello’s playing and singing successfully but also dulls some of the enjoyment of this album. Let’s face it: when you ask someone if they want to hear a bluegrass record with all of its time-worn mandolins, banjos, accordions and guitars, they’ll likely want a wistful Stanley Brothers roadside jukebox favorite and not Elvis Costello’s anti-slavery polemic on “Red Cotton.” If he puts himself in the deep end and wants an out and out down-home record, it needs to be placed on the same trajectory as about 70 years worth of recordings to see if Costello can hold his own against the best men and women the rocky rural south has offered.

Within that company, Secret, Profane and Sugarcane serves as a worthy companion to these records but misses out on the fun, spirituality and lyricism that makes this music spark. Even on the goofy road trip found in “Sulfur and Sugarcane” there’s this sense of workmanlike grit that feels out of place, as if Costello is clocking overtime but not letting the spirit of the style wash over him. Still, Costello is in firm control of his environment and he works smart and hard. The outcome is pretty when it needs to be while staying lively and intimate; Burnett should be commended for placing us in the room with Costello’s band with his clear and unobtrusive production. It seems that Burnett realizes, like the rest of us, that the best way to hear Elvis Costello nowadays is either in concert or by providing the next best thing to it.

This author has not added a biography. Meanwhile Neal Fersko has contributed 54 posts. Click here to view them.