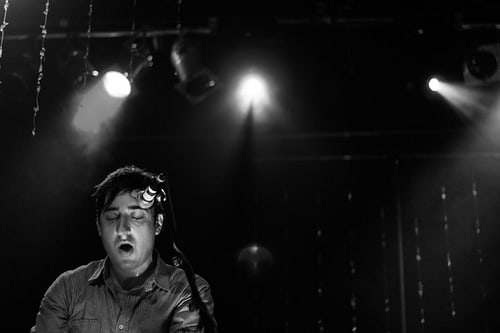 Live music has a lot in common with street food: they’re both thrown together on the spot, messily presented, often with a slightly unsatisfying taste of watered down facsimile. But in both cases you put up with the negatives, because the result is instantly gratifying, and when it’s done correctly, singularly enjoyable. With the right performance, live music overcomes its inherent limitations, the negatives handily overcome by the messy spectacle of songs bursting into three dimensions. Yet in their May 29th show at New York’s Town Hall – the first of three city dates – Grizzly Bear dispatched with all this messiness, setting aside both its negatives and the positives. The result was a set featuring songs that appeared surprisingly close to their album counterparts, but also fussily absent of any real sense of energy.

This may have owed something to the inherently reserved atmosphere of Town Hall, with its sitting-room-only crowd, plush red seats and overhanging balcony. Whether influenced by the setting or not, the band was exceedingly well-behaved, remaining fixed in their chosen positions, displayed in a line from left to right for the entirety of the show. They appeared almost rooted to the ground, and that kept the crowd in their seats and the mood artfully subdued. Surrounded by a litany of specific instruments, what resulted was closer to a nearly exact recreation of recorded material than a live interpretation.

This was not necessarily a negative. The band played through most of the recent Veckatimest and a good amount of Yellow House, flanked by an eerie backdrop of glowing mason jars, flickering with light, which acted as a more tasteful variation on the usual programmed sets of flashing lights. This established a perfect counterpoint for the homey comfort of the music, a cozy touch that recalled fireflies and dim porch lamps.

The snug atmosphere represented a clear step back from the wilder tenets of the standard rock show, with the band seemingly less interested in energy than building carefully structured scale models. The attention to detail was admirable; with as many as three instrument changes per song, each member shifted from one to another, turning the entire show into a fascinating series of clockwork movements. Bassist Chris Taylor played flute, clarinet and saxophone, among other things and besides his given instrument, drummer Christopher Bear changed sticks and adjusted his kit, small keyboards, different guitars and even an autoharp made brief appearances.

Sucked dry of chaotic energy, the band’s set gave rise to different kind of pleasures, a rotating spectacle that was like watching a well crafted machine. Near the end of the set a string quartet appeared, adding another element to an already bustling profusion of small instrumental touches. If the show was a meal, it was a tidy one, served with as much of an eye for presentation as could be mustered for a live set.

It was only as the band finished that the crowd finally rose to their feet, demanding an encore, a request which seemed unlikely to be filled at a show bent on defusing the usual concert theatrics. But the band came back, briefly, for one last acoustically delivered number. Even at a show defined by its mechanical appearance, the band wouldn’t begrudge their fans a small taste of dessert.