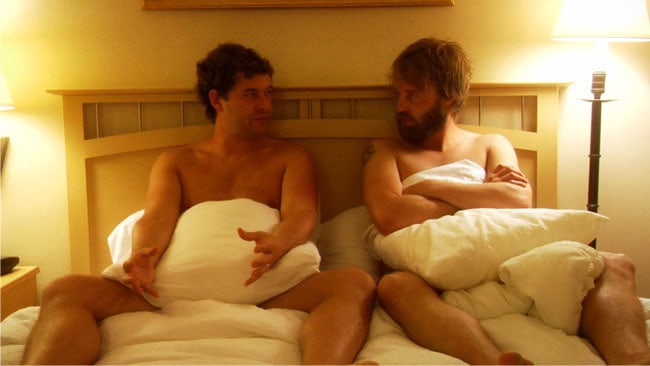 Shelton wisely avoids clichés when Anna finds out about the film. Rather than use her as a wedge or a device to potentially block production as a lesser comedy would do, Shelton utilizes Anna to reveal that men aren’t the only ones afflicted with domestic doubt or longing outside of a marriage. It is a startling revelation for not only Ben, but for the audience that has been caught up in his indecision and fears.

Humpday covers much of the same terrain as Kelly Reichardt’s Old Joy. Yet while Old Joy is an understated masterpiece of minimalism and wide-open space, Humpday takes the idea of male friendship and love and spins almost to the inverse. There are lines in most male friendships: touching is usually taboo and coming off as gay is an even scarier transgression. We always know where we are with Andrew and Ben, as much of Humpday’s improvised dialogue is more or less a non-stop ticker of emotional weather reporting, a deluge of rationalization, nervous babble and empty compliments such as, “I respect the fuck out of you.” In Old Joy, Reichardt achieved much more emotional resonance out of one aborted shoulder massage than the morass of discussion happening here.