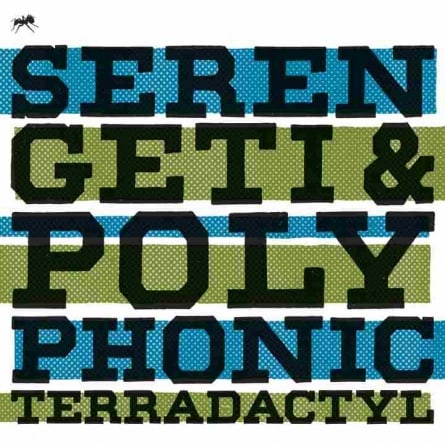 It’s always good to see an underground movement spreading, particularly in the hip-hop scene. While labels like Definitive Jux continue to gain popularity and higher-profile artists, small indie labels are recruiting talent from outside of their comfort zones. Anticon, or the Anti-Pop Consortium, long known for being as fiercely independent as well as fiercely territorial, has expanded its feelers outside of the San Francisco hip-hop scene, reaching them toward the Midwest.

With Terradactyl, Anticon has captured the second release of one of the most singular units in hip-hop: Chicago-based Serengeti (a.k.a. David Cohn) and Champaign, IL-raised Polyphonic (Will Freyman). They garnered acclaim and attention for their first collaboration, Don’t Give Up, which paired the two, having previously been solo acts. The duo was individually recognized for its respective strengths: Polyphonic for his eclectic, rhythmically glitchy production and Serengeti for his prolific body of work and his versatile lyricism, including having several musical personalities, some that he even switches between songs. They have colluded again on Terradactyl, a lovely and distant work that retains a subtle warmth and familiarity. The record shines thanks to the ebb and flow coordination of both Serengeti’s vocals and Polyphonic’s supplementary production.

With Polyphonic’s bouncy synth and tight drum, “Playing in Subway Stations” shifts from being a nostalgic tale of hard times to an optimistic proclamation of love, all done by Serengeti while Polyphonic drops in a light keyboard line. “My Negativity” features a tense, plucked cello as Serengeti debates whether he really is losing his mind, or if he’s just paranoid. He manages to be guilty on both counts. “Dawn Under the Bridge” opens with a gentle strumming as a female vocalist picks up the pieces and reminds that “morning has come.” Serengeti continues to lament on his displacement and dissatisfaction, as his characters struggle to find a moment of balance. A chirpy synth line evokes the visual of sunrise burning through last night’s haze. Even the title hearkens to his feelings of waking up and living beneath society, a major theme throughout Terradactyl.

“My Patriotism” is the standout track in this complex, glitchy love affair with despair. Behind fantastically syrupy accordions, Serengeti reflects on his disheartened outlook, equating it with losing a personal sense of patriotism. It comes across as intentionally tongue-in-cheek at points, with Polyphonic inserting an eagle screech every so often for levity. As the track powers forward with Serengeti’s frustration, it swells and here, he falls apart, literally repeating to himself (and the listener) “I surrender, I surrender, I surrender, dawg” after brokenly admitting, “I could be wrong about all this shit of course, man.”

Album closer “Calliope” ties everything together, with Serengeti thinking “If I would have just joined the army/ Got married at 18/ A recruiter could have been my best man/ I meet my dad again” and paints a vivid picture of a perfect life of acquiescence, while Polyphonic stirs up a haunting calliope line and a chugging synth that engenders a real moment of frustration. It finishes the album with a burst of passion that the previous tracks had only flirted with. The latter half of the song flips the idea, and presents the actual events with a bubbling backing track that intentionally slips away as Serengeti echoes, “It has to stop/ It has to stop/ It has to stop.”

Terradactyl only missteps occasionally and it’s usually just throwaway moments in songs, like when a chorus of “My nigga/ Nigga/ Nigga” interlopes with Serengeti stringing together lines about identity on “My Negativity.” While the intent is to highlight the absurdity of such music and lyricism claiming to be positive while simultaneously detracting, it seems ill-timed and a bad idea. Some tracks, such as “La La La” come across as too detached instead of abstract. Supported by what sounds like a preprogrammed Casio loop, the song limps, and Serengeti’s rhymes just fall flat behind the dark production.

Serengeti & Polyphonic have made an album about the difficulty of belonging. Serengeti’s multiple personalities keep the lyrics fresh and diverse, really serving to draw the listener into a multi-part conversation with the same man, while Polyphonic’s vibrant production acts as a point and a counterpoint. Terradactyl is a great step forward for Anticon, and shows a lot of promise for the duo. Like Outkast did with Aquemini, Serengeti & Polyphonic have found a sense of unity. This bodes well for both their musical partnership, and for breaking out Anticon from dorm rooms and headphones to being accepted as a great group of musicians. Serengeti & Polyphonic will make you surrender but then again I could be wrong about all this shit, of course. Terradactyl suggests that I’m not.