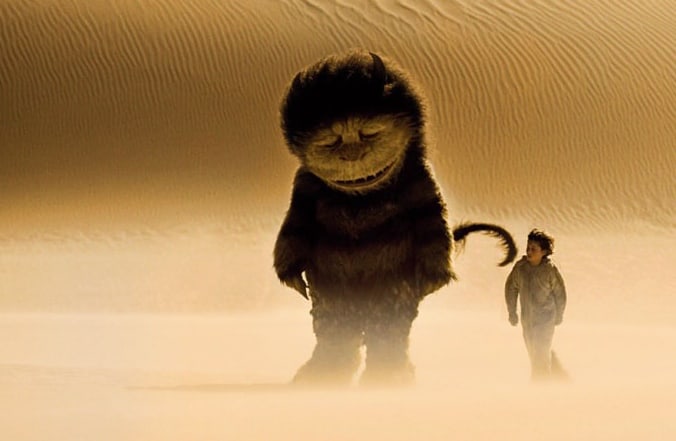 Where the Wild Things Are

Maurice Sendak’s 1963 picture book Where the Wild Things Are, a mainstay on bed stands and bookshelves across various generations, is considered by some to be a sacred cow of the lost innocence and magical monsters that populated our childhood, a bit of nostalgia that ardent fans look to as a bastion of youthful remembrance. How could anyone, even visionary director Spike Jonze and writer Dave Eggers, transform a 10 sentence story into a vital motion picture?

Sendak has said that his story is about a child learning to master his feelings. Jonze adds necessary shades of depth to a story that paints the tale of a child overcoming his feeling of abandonment by escaping to a barren land where wild things live without much regard for much else but their vital physical and emotional needs. It is the land of the id run wild, where a young boy must become king to quell all the pain and heartache that afflict these wild things.

Wild Things tells the tale of Max (Max Records), a young boy who yearns for the attention of his mother and his sister, yet cannot handle the frustration of not getting what he needs. It is obvious that Dad is out of the picture, teenage sister has moved into the age where her social life outweighs forts and igloos and mom (Catherine Keener) is struggling to keep her job and love life intact. Max feels only neglect and is incapable of seeing beyond his desires and into the hearts of others. Instead, he reacts with tears, violence and screaming.

So, Max escapes the tundra of his home life into the land of the Wild Things, a place of dramatic seascapes, majestic sand dunes and pristine forests. Yet, Max does not find the surrogate family he hopes for among these creatures. The group, headed by the fearsome Carol (James Gandolfini) is in search of a king, or a parental figure to quell the fractious tension, jealousy and neglect that plagues the group. Rather than the childhood fantasia that Max, and we by extension, had hoped for in this mysterious land, Jonze takes us to a place where maturity and empathy are the ingredients sorely missing.

As Max slowly comes to realize that being king is not just some honorary title in a childhood game, he must contend with the moods and desires of the Wild Things that mirror his own feelings from home. Carol, who longs for the attentions of KW (Lauren Ambrose), breaks into violent rages when that longing is reciprocated. See, KW would rather spend time with owls Bob and Terry than the childish Carol. The runty, goat-like Alexander (Paul Dano) sulks as he is constantly ignored by the rest of the group. Judith (Catherine O’Hara) is the sardonic rhino-like creature that can dish out sarcasm but cannot handle retorts. And so on.

This is a film about growing up and all of Max’s fears are transported with him to the land of the wild things. Jonze also contends that education is an eventual step towards adulthood, that as we learn how the world works, the magic ebbs further and further away. After Max learns of the eventual death of the sun in a science class, he frightens Carol by sharing this knowledge, setting off a chain reaction of destruction meant to flail at the breaking down of childhood mystery but perhaps irrevocably destroying the solace Max has brought to the island.

Despite its magnificent palette and amazing costumes, Jonze makes some decisions that prevents Where the Wild Things Are from reaching the classic status its namesake story has achieved. Firstly, the soundtrack featuring Karen O and the Kids feels incongruous to the sad shadow that hangs over the island, ultimately distracting from the movie. Sure, there are scenes of unbridled joy, but the hip quality of Karen O timestamps the film at the end of the aughts rather than open the movie up for a timeless feeling. There are also too many tracking shots of Max running. It feels as if a quarter of the film is spent tailing the child as he runs from one place to another. But, the decision to use minimal CGI gives the Wild Things an indelible feel that seems to have been lost since computer generated images have cornered the market on most creatures in films these days. Sure, the creatures in District 9 look good, but you cannot beat the fact the Wild Things are actually there with Max.

Jonze wants us to feel the growing pains of childhood and at its end, Where the Wild Things Are is a moving, thoughtful look back at a time in our lives when we didn’t understand the way the world works. And that is where Jonze pulls off the biggest trick of all. Rather than just transport us to the magical land that inhabited our somnolent child heads, he allows us to recall the emotions and confusion that plagued us as our magical worlds of talking animals ebbed away into the recesses of a time past.