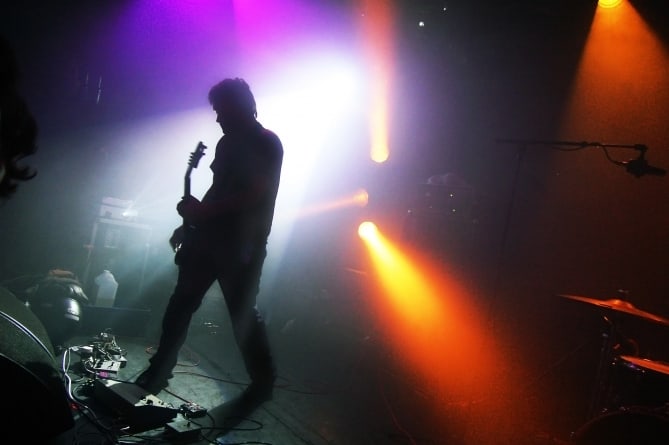 The history of 20th century music is unimaginable without noise and volume. Even from the beginning, rock ‘n’ roll was derided as noise pollution and the deliberate use of feedback and harsh effects is an essential part of its DNA, from the Velvet Underground and the Stooges through punk and post-punk to Sonic Youth and Dinosaur Jr. to the current crop of lo-fi bands. Touring behind their new album, Exploding Head, NYC trio A Place to Bury Strangers commonly gets tagged as the loudest band in the country and the heirs to shoegaze pioneers like the Jesus and Mary Chain. And playing in the cozy, stylish confines of the Doug Fir, they were awfully, almost painfully, loud. Yet that came at the expense of any sort of performance and stage presence, and openers These Are Powers easily upstaged them.

Brooklyn/Chicago trio These Are Powers use noise and fucked up sounds too, but they don’t lose the hooks or the personality. They dubbed their music “ghost punk,” but there are jagged chunks of No Wave, post-punk, dance, and electronica in there too. At times they come across as the bastard child of dance punk, with the emphasis on the punk, not so much in terms of sound but in terms of attitude and wild energy. There were lots of weird, throbbing electronic sounds, but also heavy dance beats and a sweaty, primal feel. They could be called post-industrial, conjuring up an already decayed, burned out city; maybe Detroit could use them in a tourist campaign. Anna Barie’s intense, confrontational vocals recall Alison Mosshart of the Kills and the Dead Weather and early Karen O, and former Liars bassist Pat Noecker coaxes out some harsh, ungodly noises from his bass. Yet despite their experimental/avant-garde bent, it never felt abstract or self-indulgent. Songs like “Easy Answers” and “Candy Man,” from their latest album All Aboard Future, are both art damaged and strangely catchy. The band was engaged and passionate and front woman Barie is a charismatic and gracious performer, thanking a crowd which couldn’t have numbered more than 60 people.

On Exploding Head, A Place to Bury Strangers found a balance between songs and loudness, but in concert, most of the songs were obliterated in a hailstorm of noise. The vocals were so buried as to be irrelevant and the more melodic/song elements were smothered. At their best they sounded like some kind of belligerent force of nature, the equivalent of being caught in a tornado of sound. Guitarist Oliver Ackermann would periodically freak out on guitar, but it seemed more for his benefit rather than for the audience. And unlike someone such as J Mascis, the solos and pedal explosions felt more the point of the song, rather than a part of it. They did manage to make already fast songs, like “It is Nothing,” even faster and much credit goes to machine-like drummer Jay Space who never lost the tempo or beat. The band didn’t say a word to the audience or even acknowledge them, seemingly lost in a zone of overpowering volume.

Towards the end of their rather short set, strobe lights and a smoke machine (is this Spinal Tap?) kicked in and, coupled with the blistering guitars, it became almost unbearable. While there is often an S&M relationship between performer and audience, they really pushed it. Death by Audio is the name of their recording/rehearsal space and this felt something like a sonic assault. I did wonder at some point, what’s the point of being so loud? The band seemed to see that as a virtue in and of itself. And, also, are you that cool that you can’t say anything to your audience? Clearly, they are not bent on cultivating a fan base. They left the stage, unceremoniously, maybe even contemptuously, with smoke in the air and instruments feeding back. There was no encore. My friend simply asked, “What the fuck was that?”

A Place to Bury Strangers may have the reputation, but sheer volume won’t compensate for lack of personality and performance skill. These Are Powers was far superior in that regard; they won me over and I’d far rather see them again than Strangers.