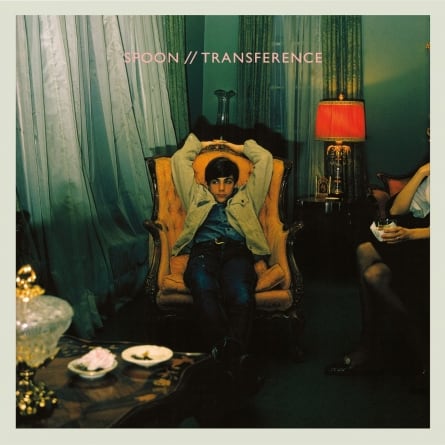 Falling in love with Spoon’s last record was easy. Ga Ga Ga Ga Ga had songs like “You Got Yr. Cherry Bomb” and “The Underdog” which imprinted onto the brain’s synapses the moment you hit play, with rollicking guitars offset by catchy horns and the band’s pop acumen fully evident. The indie rock pessimist expected them to go further in that direction, possibly at the expense of what Spoon is known for: fractured, intelligent rock ‘n’ roll.

However, as if to shake off worthless hangers-on they gained from Ga Ga Ga Ga Ga, Transference sees Spoon going in the opposite direction, starting off with the tactically placed opener “Before Destruction,” a lo-fi warning to the listener: ATTENTION: NO HORN SECTIONS. The listeners that stay for the second track get rewarded with “Is Love Forever?,” a more traditional Spoon song featuring some of my favorite lyrics on the album, as the eponymous question is asked by “Some ex-girlfriend/ Call her Heather.”

As you might expect with a band at the boards on their own album, there’s a lot of vintage Spoon on Transference, like the aggressively cool “Written in Reverse,” a dose of juke joint rock ‘n’ roll using the band’s signature piano-as-guitar shtick. It feels like a single, but doesn’t feel tailored to be a single like “The Underdog” did. Ditto “Trouble Comes Running,” which captures the energy of a live performance; you can practically hear the guitarists leaning in to shout into the same microphone.

In Spoon’s hands rock ‘n’ roll is hardly dead, but a rampaging patchwork revivification. Songs like “The Mystery Zone” feature some traditional structures complete with guitar solos but the components making them up are so beautifully skewed that, like an unconventional action movie, it feels subversive and exciting as opposed to a rehash of old ideas. Inventive and playful work with larger established frameworks being what indie rock is about (cue rebuttals). Spoon always seemed to straddle the line between indie and adjectiveless rock ‘n’ roll, creating accessible yet subtly unconventional music, but Transference swings them ever so slightly into the former realm.

Perhaps because they’ve recorded the album without a care for pleasing anyone but themselves (and, by extension, the die-hards), Spoon also create an arena to experiment with tracks like the dark, minimalist “Who Makes Your Money,” a track as irresistible as “The Underdog-” also, its antithesis, by depending almost entirely bass, drums and a handful of spacey piano notes instead of horn sections and hooks. Meanwhile, “I Saw the Light” doesn’t really begin until the vocals go away, as the song evolves from rock ‘n’ roll into swelling interplay between piano and guitar.

“Goodnight Laura,” meanwhile, is a moody DIY piano ballad that sounds like Britt Daniel just hit “Record” and sat at the piano. It could have been a demo for a much more bombastic song — take out Daniel humming and add some strings and suddenly all the intimacy and goodness shrivel away. Instead “Goodnight Laura” exists in all its pure rawness, making it the most exemplary track on Transference, a record about stripping away all the gloss of the studio album to find the band underneath.