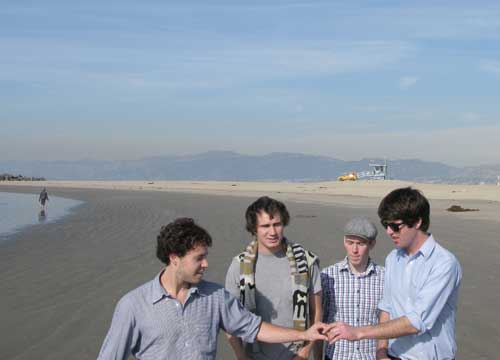 Mired in the socio-political controversy that surrounded their perhaps short-sighted choice of band name, the Muslims became the Soft Pack in late-2008. It was a well-timed move; the San Diego/LA quartet had wrenched the attention-grabbing moniker dry of its buzz-building potential with the well-received singles “Parasites” and “Extinction.” To go any further with the name, especially in the face of an “ignorant, often racist” audience response, would have been counter-productive. Some may cry foul, complaining that the foursome have compromised themselves and sold out to greener marketing pastures, but both names are equally irrelevant. If you’re looking for deep meaning, this isn’t the hotly anticipated debut album for you.

From its very first track, The Soft Pack is easy to write off. After all, we live in a post-Ramones, post-Fugazi and post-Strokes world here. If you count Wavves and the Black Lips, we’ve reached about the 212th revival of the same late-’70s punk rock aesthetic. But in front of an indie elite that demands innovation at every turn, it’s almost more daring to release a straight-up, power-chord laden, 10-track, 30-minute rock record than it would to add a synthesizer, a brass section and call yourself unclassifiable. This is a crowded market; it takes guts to stand out. The Black Lips do it with fucked up live show insanity, Wavves do it with–wait, what do people like about Wavves again? The Soft Pack approaches the problem with clean, consistent songwriting and, for the most part, is reasonably successful.

Bustling opener “C’mon” sets a pace that barely changes through the album’s duration–just that half-step quicker than you expect, as if the band is stuck in a gear normally reserved for the stage. Frontman Matt Lamkin sounds something like Ian MacKaye in his capable iterations of The Soft Pack’s sing-a-long verse. “I see the couples passing/ Walking hand in hand/ I wanna be alone ’cause I can’t understand/ Why I’m down on lovin‘,” Lamkin croons on “Down on Loving,” a song that finds him just where you’d expect. On “Move Along,” he just doesn’t fit in, “More or Less” covers greed and material excess–but the Soft Pack actually wrangle such plain candor to their advantage. Simple ideas filled out with unambiguous lyricism and wailing choruses keep this debut from running into a derivative blur of mumbling punk guitars and crashing percussion.

Lead-single “Answer to Yourself” is the most interesting track of the bunch, albeit unintentionally. “You’re more talented than you know/ And you give it a shot/ And give it the time to be surprised how far it goes/ But I think I’m gonna die/ Before I see my time,” it goes, presumably a no-regrets anthem for self-confident risk-taking. The surf rock feel pins a sentiment that equally applies to the hopeful yet uncertain future of a band like the Soft Pack. Where they go from here is anyone’s guess. One would hope for some artful evolution or ideological refinement, but they could just as easily take the Kings of Leon route to commercial appeal with a big ol’ stadium rocker, or join the Vines and Libertines in obscure irrelevance. The Soft Pack may be easy to pick up, put down and shrug off for its intellectual failings, but these San Diegans just might live to see their time.

This author has not added a biography. Meanwhile Brady Baker has contributed 37 posts. Click here to view them.