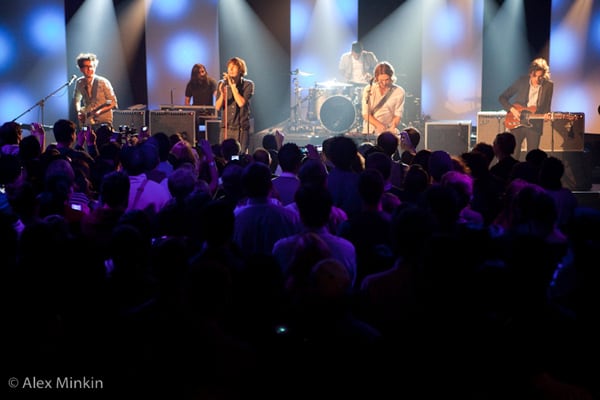 Many bands tour to promote an album, expand their fan base and sell a few t-shirts. French quartet Phoenix’s American Tour is more of a victory lap. Though they’re four albums in and have been together for over a decade, 2009 was their year. It can be hard these days to figure out why a band suddenly breaks (A free single? An appearance on SNL? French-ness?), but Phoenix’s fourth album, Wolfgang Amadeus Phoenix, put them over the top. Clearly, their sophisticated, catchy and sleek pop is easy to like, but their previous album, 2006’s It’s Never Been Like That was equally good and just as loaded with catchy and sleek pop songs. Regardless, it’s nice to see them succeed, even if it means sharing them with a lot more people.

We arrived early at the Crystal in order to get a coveted spot near the stage, which is too small and inconveniently wedged in the corner of the cavernous room. Everything’s at a bit of a slant and, to further complicate matters, the drinkers are divided from the non-drinkers by a barrier and a long aisle. This is one of the most poorly utilized spaces in Portland, but, hey, the floors bounce! If you want to drink or value your personal space, you won’t be able to see well. If you do mange to get up close, prepare to defend every inch you stand on and to be sweated on. It may be worth it though, as once you leave the area in front of the stage, the sound is swallowed up by the room’s terrible acoustics.

Opening band the Soft Pack hail from California and are enjoying a small amount of buzz. They played an energetic and swift set. Their best songs had a power punk energy, new wave hooks and guitars that recalled ’70s icons Television and the Modern Lovers. Unfortunately, they felt the need to play some slower songs, which killed the momentum. It’s too early to tell if they’ll move past their influences, but they were an enjoyable opening act.

As it got closer to Phoenix’s set, space became more and more precious and it appeared we were making up our demographic. It is a sea of kids and hipsters, but at least they’re listening to something other than Kings of Leon or Owl City. When Phoenix took the stage around 10pm, there was that sudden rush from the back that you get at crowded shows, making you feel like cattle in a stockyard. The band wasted no time, hitting the ground running with a rousing, euphoric version of “Lisztomania.” The irony of playing a song about the furor surrounding a composer to a packed house of screaming fans was probably not lost on the band. I can’t remember the last show I’ve been to where the audience was so into the band and so unapologetically adoring.

On record, Phoenix are cool, continental and pop-y, which didn’t prepare me for the unflagging, unforced level of energy they bring to their live show. Even if their songs are not exactly balls to the walls rockers, it was a rock show. They were augmented by two additional members, and the drummer in particular gave the music a more robust and muscular component. They covered most of their catalog, concentrating on their last two albums, playing sing-a-long pop gems such as “Lasso,” “Long Distance Call” and “Napoleon Says.” They also dipped into their second album, Alphabetical, for a rocking version of “Run Run Run” and a stripped down version of “Everything is Everything.” Dapper singer Thomas Mars worked the crowd without losing his Gallic cool. It did remind me of the virtues of a frontman who just sings and is able to move around, toss the mic and, on occasion, leap into the crowd.

The one song that stood out from the others was the relatively long two-part “Love Like a Sunset.” The first part is a long, textured Krautrock-ish instrumental, while the second erupts with pounding drums and Mars’s clear, supple vocals. They returned for an encore to an enraptured, deafening crowd. Mars and one of the guitarists did a tossed off version of “Playground Love,” from The Virgin Suicides soundtrack and then the band closed with their triumphant single, “1901,” which threw the already won over audience into a frenzy. While it was crowded and hot, it was one of the most entertaining, uplifting shows I’d seen in a while. And it doesn’t seem that fame is going to their head, as they were gracious and friendly; Phoenix richly deserves their success.