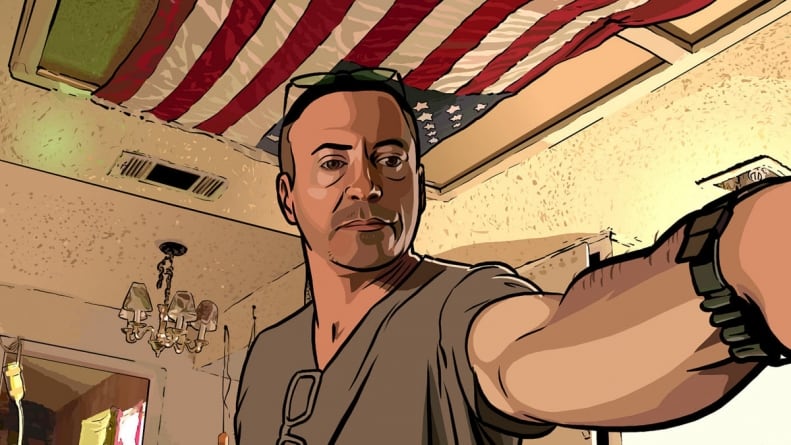 “What does a scanner see? he asked himself. I mean, really see? Into the head? Down into the heart?. . .if the scanner sees only darkly, the way I myself do, then we are cursed, cursed again and like we have been continually, and we’ll wind up dead this way, knowing very little and getting that little fragment wrong too.”-Philip K. Dick, A Scanner Darkly

Philip K. Dick (1928-1982), while remaining a cult writer, has emerged as one of the most influential and forward-thinking novelists of the past 40 years; the Village Voice called him “a poor man’s Pynchon,” while Ursula K. Le Guin called him a “homegrown Borges.” Much like Ballard or Burroughs, he was a fringe/counter-culture figure whose writing both tapped into some of the darker and more sinister aspects of the zeitgeist, as well as anticipating where it would go. Those authors’ writing, while far from popular, retains a vitality, relevance and edge that their more literary, mainstream contemporaries lack. Dick’s output is large, so the quality is erratic and the sci-fi label has kept him from the critical acclaim he deserves, although the Library of America recently put out three superb hardcover collections of his novels. Films continue to mine him both directly and indirectly. Blade Runner is the most prominent, though it lost much of the plaintive, philosophical qualities of the book and is largely a triumph of set design and mood. There are other well known adaptations (Total Recall, Minority Report) and not so well-known adaptations (Screamers, Paycheck). Two of his prominent themes-How do we know our reality is authentic and are robots/androids capable of thoughts/feelings?-are continually exploited by sci-fi at large.

Richard Linklater’s film of Dick’s 1977 novel is one of the most faithful and also one of the best. It was one of two films Linklater released in 2006-the other was the uneven, but interesting Fast Food Nation– both of which found him more engaged than ever with the surrounding culture. In 2006, A Scanner Darkly felt like a movie of the moment. With its sweaty, drug-induced, paranoid vibe, disintegrating identity, constant surveillance and quietly freaked out unease, it is both surreal and immediate. Linklater used the same rotoscope animation technique he employed on Waking Life, which works perfectly, as it makes everything feel a little off and unreal. Everything is constantly shifting and fluctuating, so that neither the characters nor the audience can find steady ground. If Waking Life was a pleasantly, hazily, slightly stoned, philosophical Alice-like journey, Scanner is the ugly underside, more of an extended, heavy bad trip.

Linklater’s always been good with ensembles and here he assembles an unusual cast of ’90s veterans-Keanu Reeves, Robert Downey Jr., Winona Ryder and Woody Harrelson, as well as Rory Cochrane from Dazed and Confused, which wouldn’t be a bad alternative title for this. Despite preconceptions or fears of Reeves re-doing The Matrix, he and the cast work well. Downey and Harrelson provide the comic moments, Ryder is attractive and enigmatic and Reeves is understated and somewhat out of it-but not in a nice, stoned way that we’re accustomed to, rather, more in a disoriented, what-the-hell-is-happening way. As in other Linklater movies, there are plenty of hang out scenes where the characters just talk. However, there is something much more unsettled beneath the surface, giving even the most casual conversations a sinister edge. Because somebody could be watching or listening at any moment. Much of the movie has this vaguely menacing, reality-drift sense to it and there’s something about it that felt in synch with the ugly mood of the country in ’06. Reeves plays Fred, a cop who is deep undercover, hanging out with drug users and dealers, and has himself become so addicted to the drugs that he’s starting to lose a sense of identity and reality. He’s also Bob, a dealer in the ubiquitous and highly addictive Substance D. As it turns out, he is investigating himself. Yet it’s never entirely clear where one begins and the other ends, which is one of the most compelling aspects of the story.

Scanner was not much of a success with audiences or critics, which is too bad. Looking back on the decade, few films seem to capture the grim, spooked atmosphere so well. It may be Linklater’s most atypical film, replacing his usual low-key vibe and warm-hearted optimism with very deep paranoia and pessimism. As the tagline read, “Everything is not going to be OK.” The best sci-fi, of course, is not speculating about the future, but is using the tools of the genre to critique and explore contemporary culture, in this case the drug war, the surveillance state and the hidden forces that impact our lives. Although set in the not too distant future, there are no lasers or flying cars here, and it’s very much grounded in its characters. It ends with one of Linklater’s most ambiguous and disturbing endings, leaving Fred’s fate open. In keeping with the novel, which is also a requiem for fallen drug comrades, there is a list of Dick’s friends who were damaged or killed by drugs. It makes for a film that is both ambitious and far-reaching and deeply personal. It is neither his most popular nor his most acclaimed film of the 00s, but it may be his best, and I think its reputation will only grow with age.