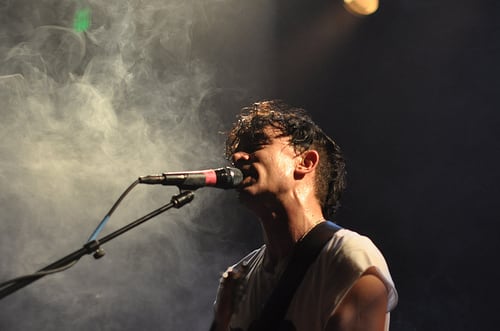 It says a lot for a band’s chops if they can overcome a jackass audience and still put on a memorable rock show. Despite the spate of fuckheads that turned out that evening, the Big Pink played an electrifying set that still leaves a good impression even after putting up with a night of bullshit. I don’t want to spend the bulk of this review bemoaning the crowd etiquette, but I just would to give you dear readers two choice events that took away from a night where bands rocked out and the crowd left the Doug Fir in the biggest state of littered disarray that I have seen since going to shows there.

Exhibit A: A girl is dancing near the stage. Her possible boyfriend pushes through the crowd, wraps his arm around her neck, drags her to the side of the club and throws her against the wall. Another dude tries to intercede but dragging man pushes him back, takes girl by arm and pulls her out of the club.

Exhibit B: There are maybe four songs left in the Big Pink’s set. Two girls and a guy push to just in front of us. One chick starts making with the guy. The other girl is shouting at them. They stop kissing and the kissing chick tries to kiss the shouting chick. Doesn’t go over well. Couple resumes kissing through the last two songs. Non-stop. No shit.

Consider throat cleared. Before all this fuckery took place, openers A Place to Bury Strangers took the stage. Beneath all the smoke pumped into the club it was tough to see them, but they made their presence felt with their thunderous, reverb-soaked set. For 40 minutes, APTBS launched a full-front assault with feedback, strobing lights and murky vocals. Playing mainly songs from new album Exploding Head, the members of APTBS said nary a word to the crowd and leaving only the impression of noise on us when they left the stage.

Although more fog rolled in for the Big Pink set, the London-based band played extrovert to the previous introverted performance. Singer Robbie Furze exploded onto the stage, clad in a black leather jacket, heroic mullet flowing and launched into big rock star moves as the band started with “Too Young to Love,” pausing only to scream out, “Portland!” to rile up the crowd.

With only one album, the excellent A Brief History of Love to their credit, the Big Pink still managed to play a set lasting over one hour. Furze stripped down to just a T-shirt as he worked the crowd, daring to jump in but pulling back at the last moment.

While there is only so much you can do with one album, the Big Pink did its best to keep things loose despite playing most of said album. They played the title track, which Furze introduced as, “We never really do it. So just bear with us.” Even without the vocal duet with Joanne Robertson, the song sounded tender. After an unnamed new song, the band brought the tempo down, closing out the first set with “Velvet.” But the band didn’t even walk off the stage and for its encore, played its hit song “Dominos.” The crowd danced, some people made out in front of me and I looked forward to a chance to see the Big Pink again.