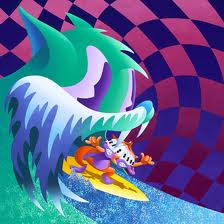 Whether you hate MGMT or begrudgingly tolerate them on the basis of a few insanely catchy singles, it’s impossible to deny they know the value of appearances. Their 2007 debut album, Oracular Spectacular, was a mostly solid piece of art pop, perhaps best summed up by its cover art: two ridiculously/stylishly dressed, boyish looking young men standing against a blue ocean in carefully awkward poses. Similarly, their follow-up, Congratulations, can be judged in the same way: the most ridiculous, indulgent thing that anyone could have thought up. Expectations are always high on a sophomore album, and Congratulations doesn’t even try to live up to what fans may have wanted, but doesn’t quite work on its own terms, either.

“It’s Working” opens the album with a tightly winding surf rock-like guitar line, with distantly weird synthesizers sounding like harmoniums. It’s a massive clutter of sounds, each a bit denser than the last. That’s not particularly surprising, considering the album was produced by Pete Kember (i.e., the guy from Spacemen 3 who’s not Jason Pierce), nor is its moments of cheekiness like the mid-song slowdown to ape the “Be My Baby” drum intro. What is more disheartening is it’s not that particularly interesting of a song, more just a collection of sounds and ideas. Congratulations largely moves at a rapid pace, tempos and overdubbed voices a little too similar from track to track (“It’s Working,” “Song for Dan Treacy” and “Brian Eno” all share the same pacing and general mood of schizophrenic keyboards) to make most of the album sound distinctive. It’s actually remarkable that so many of the songs sound alike, considering that it all sounds like messrs. Andrew VanWyngarden and Ben Goldwasser were given free rein to put whatever they wanted together. They claim to not plan to release a single, even.

There are high moments in the album, like the quiet, unnerving “I’m cut and I’m weeping like a rubber tree/ But I don’t care who’s left behind” abruptly becoming a melancholy funk beat, or “Lady Dada’s Nightmare”‘s stately, instrumental paranoia. But as an album, Congratulations is clearly the work of two guys making music that they wanted to listen to, not anyone else. Which is great, unless you want people to want to listen to your music. As it is, this is a bewildering sophomore effort, a kind of sidestepping from expectations. It’s actually an album that improves on repeated visits (particularly as no cut stands out enough on a single listen), as the layers of sound sink in. But when even the catchiest song, “Flash Delirium,” plugs along in mindless genre shifting, shiny sounding organs and a bouncy bass line, it begins to sound dull.

And maybe that’s what MGMT wants. Rock history is full of people defying audience expectations in favor of personal drive: Dylan going electric (and don’t get on your high horse, it’s an analogy, not a comparison), New Order soldiering on with synths, Beck transmogrifying into Prince. MGMT may be praised in the future for following their own path, but for now it just sounds like an album by two guys playing what they feel like playing.