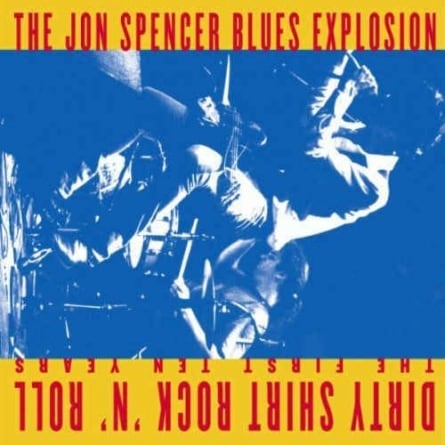 Jon Spencer is the kind of artist best sampled in small doses. He’s undoubtedly a passionate, if not single-mindedly talented man; listen to just about any of his tracks with the Blues Explosion and you’ll hear just how much energy and contagious bravado saturates his music. And it’s not like he hasn’t earned his fans. For a guy that began his career in a band called Pussy Galore, he has a surprising amount of abrasive charisma. Recorded, that rock ‘n’ roll swagger can make for a short bout of ecstatic fun but will likely be followed by increasing overexposure. For that reason the Jon Spencer Blues Explosion is especially suited for a short and sweet essentials collection, and that collection is especially suited for fans who can listen to Dirty Shirt Rock ‘N’ Roll from start to finish. Doing so is a potentially exhausting feat with much fun to be had.

There are 22 tracks here, both fan favorites and critically recognized songs, including the definitive “Bellbottoms.” Many of these focus on the band’s view of itself. This suggests — accurately – that the JSBE sings as much about their own curious expression of rock and blues as they do other topics, and more so that they deem this a highlight of the band’s best tracks. This facet of Dirty Shirt comes dangerously close to becoming overwrought but does provide an iconic face to Jon Spencer’s role in musical history. It’s really all there in the lyrics. He sings, “Back in the mind of a young teenager/ Rock’n’roll music was my life saver/ I was thick as molasses/ I was sad as can be” on “Leave Me Alone So I Can Rock Again,” belts out his manifesto of “A best-of man mucho and a chart of frown/ Better hang on fellas while I get my crown” on “Money Rock’N’Roll,” slams Rolling Stone and SPIN after “I’m talking about the blues/ Rolling Stone magazine/ On the telephone baby.” These are songs for the “scuzz-rock” enthusiast – grime, noise and lap-dances are all part of the equation, but you shouldn’t think too much about the solution. Dirty Shirt really is a distillation of everything the JSBE is about via clattering drums, wailing harmonica, cheesy vocals and repetitive chords. That style can make this disc and all of Jon Spencer’s work annoying as hell to a passing listener yet downright indispensable to adamant fans.

In a way, Dirty Shirt is exactly what an essential collection should be. It feels downright massive – not bloated, but comprehensive and fully representative of the Explosion’s many extreme moods. It includes the hits (“Magical Colors”) right along more particular fan favorites (“Wail”). It even manages to create a singular portrait of the JSBE – as if anyone with more than passing familiarity with Spencer himself needs an explanation of what he’s all about. What it doesn’t do is tame the ballistic nature of the Explosion’s music. That ultimately is a boon for being an honest and enjoyable representation of a band that revels in its own sonic fury; it also should test any listener’s endurance to the point of musical exhaustion. Fortunately, Dirty Shirt is a much quicker route to getting a Jon Spencer fix than independently sorting through 10 years of filler.