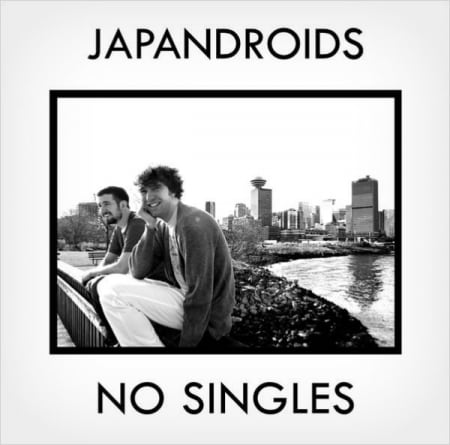 The first chords of “Darkness on the Edge of Gastown” provide all the headway needed for what to expect on No Singles, a surprisingly cohesive compilation of All Lies and Lullaby Death Jams, two out-of-print Japandroids EPs. Whereas many artists are busy experimenting with their sounds, merging genres and layering an assortment of instruments, duo Brian King and David Prowse are content with just garage-rockin’ out. Not that there’s anything wrong with that, as evinced by their proclivity for catchy hooks and raw energy.

Japandroids’ sound is as simple as it gets. King’s fuzzy guitar, always cranked to 12, blares amidst a whirring wall of flanger modulation. Meanwhile, Prowse fires away on the drums, pounding fast and furiously as if punk was going out of style. Their stop-start songwriting approach allows Prowse to fluidly change beats and tempos. The sprawling punk epic “Lucifer’s Symphony” best demonstrates the band’s rhythmic flexibility with an almost perpetual tempo change. The duo has always played what it wants when it wants, abstaining from any formulaic constraint. This makes No Singles unpredictable, a consistently engaging ride from start to finish.

But what really ties Japandroids’ sound is King’s and Prowse’s emotionally potent vocal melodies. King’s boyish, Thurston Moore-like croon trades off with Prowse’s snarky, belligerent chanting that adds that one extra element of garage punk, giving their music its angsty, rocket-fueled edge. “No Allegiance to the Queen” bears a chord progression used a million times over in rock and punk, but King and Prowse breathe life into it with a fresh vocalic approach. The ecstatic melody in “Sexual Aerosol” conveys how compelling even the simplest pairing of elements can fare.

Ironically, some tracks off All Lies’ half inhibit the record’s energy even though the beats get faster and the songs are more abrasive. “Couture Suicide” and “Avant Sleepwalk” are the punkiest offerings on the No Singles, but without the charming dose of emotion prevalent on the Lullaby Death Jams half of the record, they only come off as brash. This arrogant attitude peaks on a poorly-chosen cover of Welsh band Mclusky’s “To Hell With Good Intentions,” a track that’s straight up obnoxious (“My band is better than your band/ We’ve got more songs than a song convention/ Sing it/ My love is bigger than your love/ Sing it“). Compilation highlight “Press Corps” redeems the collection’s latter half by refining the glorious balance of noise, attitude and energy that upholds the majority of the songs. Though No Singles won’t appeal to everyone, it’ll surely satisfy the audience that missed their first chance to hear these once-lost EPs. Missteps aside, this insight into their early material reaffirms Japandroids’ place as the most engaging two-man garage rock act since the White Stripes.