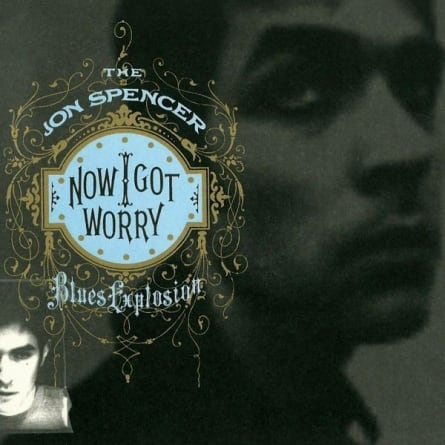 Now I Got Worry/Controversial Negro

It took me this long to finally listen to a Jon Spencer album; the man’s music stands at the intersection of garage and punk in a somewhat bluesy neighborhood, a zip code that has sort of been my bread and butter as a music listener for some time now. I’ve got a buddy, even, who wears a Norton Records (home to all manner of early rock and rockabilly reissues) patch on his jacket, who’s gonzo about vintage gear- he also hadn’t heard the man’s records when I’d mentioned I was reviewing them. Indeed, Spencer and his Blues Explosion (including second guitarist Judah Bauer and drummer Russell Simins) were always sort of flying under the radar, under-appreciated, during their mid-’90s heyday; they were the kind of band whose name you may have heard, though one’s only exposure to their actual music might have only been through catching one of their music videos getting lampooned by “Beavis and Butthead.”

It is refreshing, then, in this age of intensely cerebral, synthesized and scholarly ‘post-rock,’ that Majordomo should begin the re-issuing of the JSBE catalog, beginning with 1996’s Now I Got Worry. Worry perfectly captures the essence of studio-recorded Spencer. Despite the fact that the record was recorded in the American South and there’s that very obvious ‘b’ word in the band’s name, what Spencer and his buds did wasn’t necessarily blues in its purest sense- as many music journalists at the time were evidently pretty upset about. Spencer does show an appreciation, or at least, a familiarity with the blues in his casual use of blues clichés in his music, but Spencer shares more in common with our recent glut of lo-fi riffmashers, suggesting that the Blues Explosion, at the end of the day, has much more to do with Jay Reatard or Ty Segal than Muddy Waters.

But what makes Spencer and Worry, as a result, stand apart is his approach to his songs. It may not be the most obvious corollary, but in listening to Worry, I’m reminded of James Brown’s In the Jungle Groove. On that collection of hard-to-find singles, each with a similar, sample-ready feel, Brown and his band seemed not to play songs, as such, but rather record incredibly tight, sonic streams of consciousness with the arrangements their music called for. Spencer, likewise, seems to take this approach to his garage punk. From the manic “Love All of Me,” to the hard-charging “Wail,” Spencer’s songs sound like two to three-minute exorcisms of whatever guitar tone or riff idea that Spencer had to get out of his system at just that moment. The result, dependent upon one’s mood, can be an exhilarating rush of blood to the head or a whole lot of treble-y racket; it’s a sound that demands you take a side.

If that sounds at all appealing, then the live Controversial Negro is likely your cup of tea. Recorded in ’96 in Tucson, Arizona and released only in Japan, Negro shows the Blues Explosion as the red-hot live band they are, with Spencer frequently declaring “Blues Explosion!” into his mic, between punishing a guitar and assaulting a Theremin. In fact, it’s those Theremin-addled tracks, such as “The Vacuum of Loneliness” or “Sticky,” that are the most fun here; the wacky space age whooping and bleating emphasizing Spencer’s attack on the audience; “Arizona,” Spencer says in his goofball Elvis drawl, “Consider yourself warned.” Though its fun to hear Rufus Thomas make an appearance on Worry, Negro is where the Blues Explosion shine.

Worry’s bonus material includes a beaucoup of B-sides and even some kooky radio spots for the record; they sound exactly like radio spots for records from the late ’60s, which makes hard to tell whether these are a joke or not. Negro’s extras include a set recorded at the exact same venue two years earlier, making the two discs an embarrassment of riches for JSBE fans and devotees. For the rest of us, who largely are hearing this stuff for the first time, the Jon Spencer Blues Explosion comes off like any hot, sweaty live show: fun, loud and ultimately, exhausting.