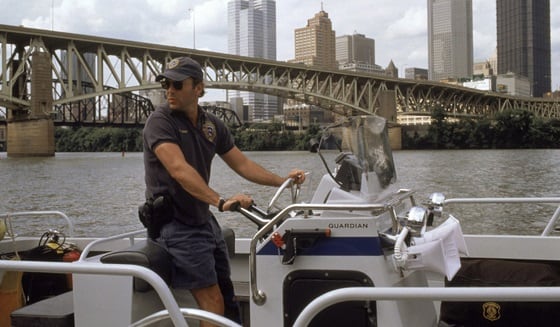 First off, no, I’m not blind, a film dunce or one of those nimrods who stands up and cheers at the end of every sad sack movie that crawls across the silver screen. Well, maybe I am sort of a film dunce who wouldn’t know Almodóvar from Tickle Me Elmo, but that’s not really the point. The point is, I may not be Siskel, Ebert or that other guy, but I’ve been around the film block enough times to know crap movies when I see them. And Striking Distance, despite its nearly laughable faults, is no crap movie.

True, this Bruce Willis (as the miserable alcoholic detective Tom Hardy) pseudo-film noir is riddled with banalities and idiocies that the critic in me would love to stick a snarky fork into. Most of the characters, from bonehead police captain Nick Detillo (Dennis Farina) to the charming-as-a-mule-kick-to-the-testicles detective Emily Harper (Sarah Jessica Parker), are lame caricatures more than believable characters. The plot is so convoluted – yet somehow predictable – that I won’t even bother trying to recap it here. The final action scene, in which Hardy and the sinister criminal mastermind Detective Jimmy Detillo (Robert Pastorelli) battle it out along the Pittsburgh river system may be the worst action scene in any Willis movie – which, of course, puts it high in the rankings for worst scene of any kind in any movie, period. Striking Distance certainly is not a grower, it hasn’t aged particularly well (as if it was ripe in the first place) and nobody will ever confuse writer/director Rowdy Herrington (Roadhouse, Jack’s Back) with the Griffiths, Kubricks and Fellinis of the world. To make matters even more awkward, Andre Braugher (as district attorney Frank Morris) stands out like a gold chip in a pile of Hollywood dung, S.J.P. is, well, S.J.P., the happily-ever-ending comes across as merely slumming and too many one-liners (“Maybe you need a drink to ease the pain of being wrong!”) sound like they came straight out of The Cornballs’s Almanac.

And now that I’ve mocked the film I’m supposed to be writing an article in defense of, I should probably offer a bit of rebuttal. This flick is not quite a guilty pleasure, and it’s far from one of those Jaws 3-like, “it’s-so-bad-it’s-good” Tinseltown debacles; rather, the movie exudes a somehow comforting aura of predictability, like a dime store murder mystery or Sherlock Holmes knockoff that, despite its flaws, remains oddly captivating. Filmed on the blue collar streets of Pittsburgh and along the city’s three rivers, Striking Distance oozes a stark grayness that realistically captures the vibe of that hard-times steel town. It’s not completely devoid of deeper meaning either, as the movie also examines the inner torment Willis’ Hardy experiences after choosing civic duty over family loyalty.

Unlike other Bruce Willis flicks of the ’90s, there’s a pleasingly absent amount of cutesiness this time around. The wise-cracking John McClane of the Die Hard series is replaced by hints of the gritty Butch that would soon shine in 1994’s Pulp Fiction and in more recent roles in Sin City and Lucky Number Slevin. A barely likable deeply conflicted boozehound who also happens to be a rat who narc’d out his partner/cousin for excessive use of force on a suspect, Hardy walks that fine line between protagonist and prick, often falling on the side of the latter, which might not endear him to most viewers but is nevertheless a quality that distinguishes Hardy from Willis’ more clichéd rebel cop roles.

Throw in the occasional dose of dark humor (“You shot your own son? There goes that gold watch!”), a passable performance by Pastorelli as the demented, back-from-the-dead, cop-turned-serial-killer Jimmy Detillo and a few memorable scenes that feature Sam the Sham’s “Li’l Red Riding Hood” as the killer’s calling card, and Striking Distance deserves a slightly better reputation than time has granted it (a rudimentary Google search for worst films ever finds the movie placed alongside such train wrecks as Howard the Duck and Battlefield Earth). Not that the movie will ever go down as a lost gem. But if, like me, you have the periodic hankering for dark but harmless fun and you don’t mind a few hiccups along the way, you’ll probably find this film well within striking distance of a pretty good time.

This author has not added a biography. Meanwhile Marcus David has contributed 69 posts. Click here to view them.