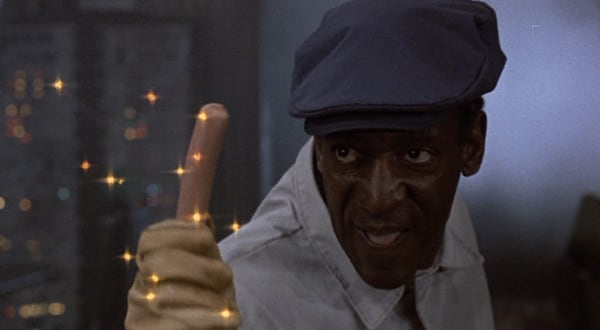 By now firmly cemented as one of America’s father figures, Bill Cosby will likely be remembered more for his work in television – where he’s been heavily involved in an amazing 10 series (eight of which have his name somewhere in the title) – than his film career, which is littered with duds and flops. Yet the generally low quality of the latter is at least bolstered by its unpredictability, which grants it a wide range, from the heart-tuggingly shlocky (1990’s Ghost Dad) to the quizzically obscure (The Devil and Max Devlin, in which he plays the devil’s assistant, opposite Elliot Gould).

The ultimate terminus of this oeuvre, in terms of both ambition and public opinion, is 1987’s Leonard Part 6 an outlandishly bizarre comedy for which a strenuous internet search reveals not a single shred of support. There is one positive assessment on Rotten Tomatoes, but although the tomato remains, the review is no longer there.

In opening my defense, I’ll admit that there are definitely valid arguments for why Leonard is a bad movie. The plot is messy; the pace is slack; a good portion of the jokes just don’t land. But can anything which includes Bill Cosby riding an ostrich, wielding magical cuts of beef and setting off an improvised Alka-Seltzer bomb really be considered entirely worthless? Its status as one of the supposed worst films of all time (#63 on IMDB’s bottom 100) speaks more of the avalanche-like tendencies of negative press than the film’s actual quality. Far from one of the worst of all time, it’s hardly even the worst thing released that month (I’ll nominate Cold Steel, starring Sharon Stone).

Leonard Part 6 (the first five are still classified) finds the title character (Cosby), a former CIA super-agent, struggling to stay retired, faced with the looming threat of a cadre of fanatic vegans bent on inverting the food chain. More a skeleton for free-form absurdism (think Anchorman) than an earnest spy-spoof, the plot draws weird parallels to Cliff Huxtable, also an unrepentant meat eater known for cadging Philly cheese steaks on the sly. Leonard runs a fancy restaurant and pines over his estranged wife, as all kinds of progressive insanity swirls around him. Rainbow trout invade a swimming pool, a legion of frogs hurls a car into the ocean and Leonard of course eventually takes action, commanding a camouflaged Porsche with a mounted machine gun.

Maybe Leonard was doomed from the beginning. Conflict between Cosby and director Paul Weiland caused the star to disown the project before it was even released, despite having also written and produced it. This gesture definitely added fuel to the fire, but the film most likely developed its rotten reputation for a variety of reasons: an established star dabbling in an unfamiliar style, a story that’s insistently weird without being consistently funny, purposeful incompetence that’s easily misinterpreted as occurring accidentally.

There’s probably no better proof that audiences weren’t prepared for the style here than a brilliant scene where Leonard, entertaining a guest, continuously shifts the label of a Coke to be in view of the camera. Roger Ebert and others have cited this as an egregiously obvious product placement, never entertaining the idea that a comedy whose plot hinges on cola, antacid and dish soap might be making some kind of statement. Most snarky slams of the movie seem inclined to list its insane plot points as offenses, as if this were some attempt at a serious story gone terribly wrong, The level of outright weirdness combined with a bad reputation seems to have convinced people that this is a stupid movie, which for all its flaws it assuredly is not.

This brings up the film’s strangest feature, a pronounced Dada influence, which exhibits itself both overtly (Leonard’s butlers are named Marcel and Duchamp) and subtly (a fortune telling gypsy reads an entire Hugo Ball zaum poem, masked as gibberish). Yes, Dada. As part of its aggressive push toward the outer edges of surrealism, Leonard makes a real effort to engage and name-drop its artistic forefathers (there’s also a character named Man Ray). No, it’s not L’Age D’Or, but Leonard uses these references to lay an explanatory foundation for its anarchic humor, cues that lazy viewers armed with pre-conceived notions haven’t bothered to catch.

The fact remains that Leonard, while not the most consistent movie, is neither boring, unoriginal nor formulaic. Unlike the Airplane-style spoofs of the same decade, which pursue ironic idiocy with total directness, giving the audience constant indictors that their stupidity is intentional, it remains obliquely experimental and weird, resulting in a project that’s too jagged for mainstream acceptance. It’s probably too late to save its reputation, but among an oeuvre characterized by safe choices, Leonard stands out as a bold and marvelous failure.