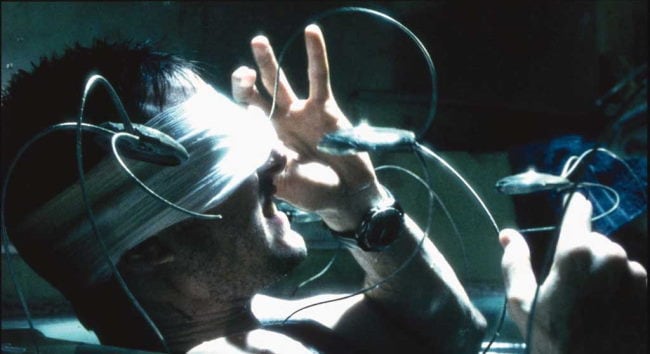 Steven Spielberg’s reputation is a tarnished one: for all the great films and success he has had in the Hollywood film industry, he is still a target. Accused of being a sell-out, a hack, or even worse: a sentimental wuss with no balls, Spielberg’s mostly had critical opinion on his side and to some extent public opinion as well, but it is no secret that a vocal amount of young filmmakers and enthusiasts find Spielberg pretentious and hackneyed. Spielberg is a talented filmmaker, who arguably created the summer blockbuster scene with his chilling and adrenaline pumping Jaws, and although he is known for his hopeful, sometimes hokey films, when he goes dark, he’s at his best.

Between 2001 and 2002, Spielberg produced three films that would compromise his unofficial “Running Man” trilogy, 2001’s ambitious if flawed A.I.: Artificial Intelligence, 2002’s Minority Report and the lighter than marshmallow whip Catch Me If You Can. Minority Report, featuring a screenplay by {Out-Of-Sight} helm Scott Frank and Jon Coen, is one of Spielberg’s most underrated works. Although successful financially and critically, it has largely fallen to the wayside in the wake of A.I.’s catastrophic reception and Catch Me If You Can’s star-wattage. Minority Report is based on a short story by Philip K. Dick, the patron saint of botched Hollywood adaptations. Most times a Dick story is co-opted, it usually loses the spirit and becomes something of a shell of its former self (see John Woo’s Paycheck… but only in theory. It sucks a lot.) However, with Minority Report, Spielberg and his screenwriters have taken a largely forgettable and plodding Dick output and turned it into a remarkable chapter of his oeuvre- a ballsy, entertaining film that manages to be insightful as well as arresting.

Basic set-up: it is the year 2054, and there hasn’t been a murder in Washington, D.C. in six years, thanks to the PreCrime division and their secret weapon, the Precogs: warped humans submerged in tanks who receive visions of murders to come. They receive the garbled info, and Chief of Precrime John Anderton (a sublime, conflicted Tom Cruise) “scrubs” the image to determine the location of the murders, and then a team is dispatched to prevent them. Precog is on the verge of going national after being a D.C. area experiment, and so Justice department agent Danny Witwer (an overlooked Colin Farrell) is sent in to investigate for any possible flaws in the program, stemming from human or Precog. When Anderton’s name comes through the Precog system, the chief is forced to go on the run to clear his name.

The most striking thing about the movie is its visual style- cinematographer Janusz Kaminski gives the entire look a washed-out, silver, white and blue palette, which coolly supplements the excellent special effects that Industrial Light & Magic have conjured up. From the touch-sensitive operations center at Precrime to the holographic home movies that Anderton watches every evening, to the Lexus prototype highways that feature magnetic cars driving sideways, the film is a visual treat first and foremost. The film’s opening scene is a forgotten masterpiece, with cross-cutting from the temporally distorted visions that the Precogs have provided to Anderton and his men rushing against time to prevent this “redball” (a crime of passion that doesn’t appear until a shorter time than normal, premeditated murders would.) Spielberg’s true influence is fusing the elements of the story, which is a cross between film noir and hard sci-fi, and yes: it does it better than Blade Runner. Not to say Minority Report is a better film, but the theatrical cut of the aforementioned film is bogged down by bad pacing and hammy narrator dialogue, which this film thankfully disregards. Though a bit overlong, {Minority Report} features a great blending of these elements: when Anderton undergoes eye surgery to fool the perpetual scanners, the shot composition and scenario is reminiscent of the Ludovico treatment from A Clockwork Orange, including the restrained eyes. The film is also styled heavily after film noir, featuring great usage of stark lighting and contrast, creating heavy shadows and very distinct, sharp imagery. A scene of Anderton running through the slums of Washington looks like a bombed-out, rain-slicked Los Angeles from Blade Runner, with all the Japanese neon replaced with holographics.

A superb shootout in a car factory with what can only be described as a “sonic shotgun” is one of the more memorable moments of action, as is a tense chase through an alley that devolves into jetpack tango (trust me- it’s worth checking out.) In lesser hands, these elements would stick out like patchwork, like in Michael Bay’s The Island, but with Spielberg’s eye for detail and knowledge of film language, they incorporate nicely to create a uniquely detailed vision of the future. Surprisingly, even for Spielberg’s occasionally heavy fist, the world of Minority Report doesn’t fall on the reliable dystopian cliché- things seem to be perfectly normal, minus the Precrime- there are drug addicts, elections, shopping malls: things you’d think would be phased out. Anderton himself is not quite as sunny and upstanding as most Spielberg characters are- he’s a drug addict coping with the loss of his son and his divorce, while handling the most stressful job in the world. The Precogs pin him as killing a man named Leo Crow, whom he has never met, but Cruise maneuvers the character to make him more than just a cookie-cutter fugitive. There is genuine trouble in Anderton’s life, and Cruise evokes and emotes so much with simple stares, as he is being pressed upon by Witwer and eventually by his former cohorts, including the criminally underused (in all movies, though surprisingly not this one) Neil McDonough as the second-in-command.

Minority Report sticks out as a far stronger effort than Spielberg’s output at the beginning of the turn of the century. I despised Catch Me If You Can and had a soft spot for A.I., but the true testament to Spielberg’s talents is this film. For being known as a family filmmaker and a Hollywood hack, when he really wants to root down in the mud, Spielberg can get really dirty, really quick. Minority Report and some of his later output, like Munich prove that he hasn’t lost his edginess of his ’70s filmmaking sensibilities- he just lets them out in bursts, which makes them all the more exciting and intriguing when he does. The film features a gritty sheen and masterfully woven plot threads, which makes for fantastic tension and gripping viewing. Don’t be in the minority much longer.