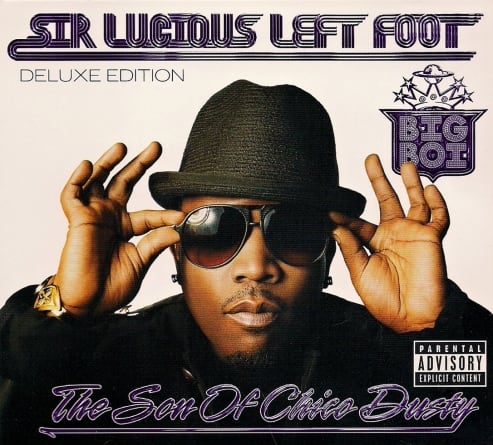 Musical collaborators are often plagued by the idea that one partner pulls more weight than the other, and perhaps no hip-hop group has been more subject to this than OutKast. Formed in the ’90s by Big Boi and Andre 3000, the duo created some of the most memorable hip-hop in their roughly 10-year run, unofficially splitting after their 2006 soundtrack to Idlewild. Three years earlier on their double-shot Speakerboxxx/The Love Below, Big Boi continued to succeed in hip-hop, while Andre 3000 achieved pop music crossover success with “Hey Ya!” Andre became the face of OutKast, while Big Boi was written off as the simple-minded Southern rapper with no desire to experiment, or without the talent to branch out. In interviews, Big Boi has described the Lucious Leftfoot moniker as a representation of his maturity, of his sharpened abilities as a musician and his commitment to being the best he can be. As he proves on his eclectic, exciting and excellent proper solo debut, Sir Lucious Leftfoot: The Son of Chico Dusty, Big Boi wasn’t in hiding- he’s been planning his assault.

Songs like the bombastic “General Patton” are a call to arms, with Big Boi furiously proclaiming,”Get the South dick up out ya mouth,” sticking a lyrical handgun into the mouths of doubters before they get a chance to retort. He isn’t asking- he’s ordering. “Daddy Fat Sax” features a slick and glitchy Organized Noize beat that underscores Big Boi’s relaxed flow, in contrast to the cannon-fire cadence of “General Patton.” Big Boi has set out to disprove claims of single mindedness and lack of versatility- his keen ear for language makes for some great punch lines, particularly on “General Patton:” “Pick on somebody ya own size and fuck around and get kilt but/ Not like the kilt above the knees/ BB will plant you niggas like seeds or fertilizer for the trees.” “Shutterbugg,” produced by Scott Storch, is a molten club banger, featuring crashing drum machines entangled with sleazy synth wraps, perfectly coalescing with Big Boi’s thunderous force. He showcases enticing, dexterous delivery, switching from his strong chorus into his silky smooth demeanor, featuring one of his most devastating verses ever.

The only real missteps on the album are the bland male-hook pop singles, for one, the forgettable “Hustle Blood,” which features a lackadaisical Jamie Foxx chorus and a bass-heavy beat that mostly drowns out Big Boi. Almost as an apology, the brilliant “Be Still” follows it up. Producer Royal Flush creates one of the straightest hot cuts off the record, dropping in a classic OutKast breakdown, supplemented by both sparse piano tinkling and drum booms. Songstress Janelle Monáe delivering a gorgeous, honey-dripped chorus, supplemented by vibrant ’80s synth spurts, which give way to Big Boi’s easy drawl and introspective lyrics- the most perfect moment of musical synchronization on the album.

“Shine Blockas” features Atlanta’s own Gucci Mane, with a vintage Cut Master Swift beat, complete with digital clanks and a soulful sound that complements both Gucci and Big Boi’s perfectly metered verses. “The Train, Pt. 2 (Sir Lucious Leftfoot Saves the Day)” features Big Boi’s take on the self-reflective rap cut. In lesser hands it would be woeful and halting, but with Big Boi’s unique lyrical gifts and Organized Noize’s haunted, whistle-based track, it creates a buoyant moment near the end of the album, where a lot of records have trouble maintaining their steam. Vocalist Sam Chris captures the tone of the song and as Big Boi and he trade off, the rapper becomes heroic, truly embracing his Lucious Leftfoot persona.

Big Boi has proven that he wasn’t just a beneficiary in OutKast- he was one of the forces that made that group rotate. While Andre managed to become more of a pop sensation, Big Boi rooted down and proved he could breathe new life into Southern rap. Guest stars like T.I. hold their own, but are easily eclipsed by the veteran. The album is dedicated to Big Boi’s late father, the eponymous Chico Dusty, who earned his moniker in the military. As he recites on “Follow Us,” “I know some of y’all done wrote a nigga off/ Like the leases on these cars and these homes you think is bought.“. Expect General Patton to burn Atlanta down with a record this hot. The wait was long, but it was worthwhile- Big Boi finally stepped out, with his best foot forward.