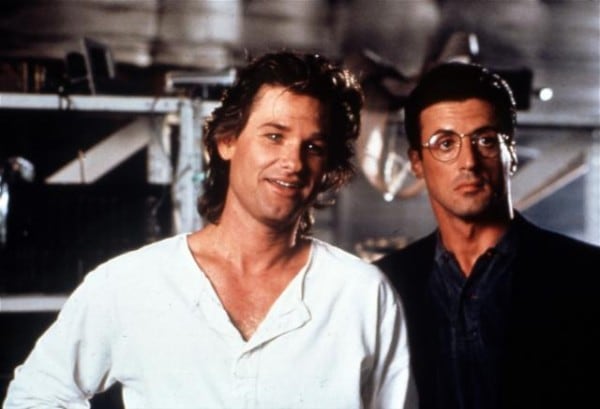 A bespectacled, well-dressed Sly Stallone stands quietly in the middle of a long, deserted highway, aiming his police-issue revolver at the tanker truck speeding towards him. The truck slams on the squealing brakes, stopping several feet before liquefying our hero. The force of the stop sends the driver and passenger straight through the windshield and onto hot pavement and shards of glass. They should be dead, obviously, but one of them is Robert Z’Dar so his chin cushioned the fall. Stallone makes an obvious pun regarding their drop and tosses a pair of handcuffs onto them.

“Rambo is a pussy,” Stallone snarks as he fires a hole into the tanker and cocaine pours out.

This is the opening scene of Tango & Cash, a movie where the two best cops in L.A. — the proper Lt. Raymond Tango (Stallone) and the wild Lt. Gabriel Cash (Kurt Russell) — are framed for a crime they didn’t commit and thus have to work together to clear their names and bring down a criminal boss. In some ways, Tango & Cash is not unlike the average buddy cop movie. They’re mismatched — one’s dapper! The other wears jeans and a bolo tie to court! — they hate one another but learn to work together amidst all the quips, barbs and shooting. When you think of a buddy cop movie and all its clichés, what you’re imagining is Tango & Cash. Along with Bad Boys II and Point Break, this had to have had a huge influence on Edgar Wright’s Hot Fuzz and all its homosexual tension.

That’s right. Tango and Cash are totally gay. As soon as they meet their interactions become screwball comedy barbs and our macho heroes transform into Clark Gable and Claudette Colbert. I’ll let you guess who is who, but I will say that Kurt Russell has long hair. As soon as our heroes walk into prison the film cuts to them talking in the shower, alone. They talk about the plot for a bit and spend the rest of the scene commenting on one another’s dicks. Oh, and at one point Kurt Russell dresses in drag to escape the cops. And the camera makes sure to linger.

In other ways, however, the film is batshit insane. It’s clear that director Andrei Konchalovsky took the term “supercop” and ran with it by making the film incongruously comic book-y. The first time we meet Jack Palance’s Yves Perret he swears revenge on Tango and Cash (separately!) and then we’re treated to a scene where Cash’s cowboy boot is also a gun. In prison, the pair’s fellow inmates concoct a scheme to kill them by dipping the two in electrified water. Tango superheroically blocks a giant spinning fan blade with an equally giant pipe. Then again, some of this may have also be the work of producer Jon Peters, whose greatest bit of infamy came from his demand that Kevin Smith write a giant spider into the abortive Superman Lives film.

The sci-fi silliness comes to a head during the film’s last 20 minutes when Cash’s Q-like armorer, Owen (who we first meet an hour into the movie), provides Tango and Cash with a battle van full of high-tech weaponry. This anticipates future needlessly overblown Hollywood movies that rely on weird gimmickry and bigger’n’better special effects instead of y’know, just being a good movie. Except that Tango & Cash is a great movie.

That’s right. Tango & Cash is wonderfully silly, unpretentious and infectiously likable, right down to the soundtrack, a gloriously goofy appropriation of “Axel F” if it had wilted in the vegetable crisper. It hasn’t aged well — at least in the way it was intended. The film itself is so gloriously eighties it becomes a parody of it while simultaneously signaling the horribly high-concept 1990s, a decade of excess rife of speeding buses and demolition men. It’s hard not to get a sense of parody from a film where, when Stallone finds out he’s tackled his police captain through a screen door and onto the lawn, the captain says (with the door on top of him, natch) “Is this how you screen all your guests?” Beautiful.

This author has not added a biography. Meanwhile Marcus David has contributed 69 posts. Click here to view them.