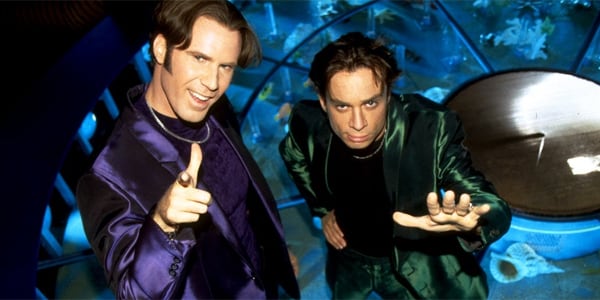 The Paramount logo kicks up, followed by the opening credits. Then, the unmistakable song pumps through the speakers: “What is love? Baby don’t hurt me, don’t hurt me no more,” Haddaway sings in his emotionally tinged dance hit. Anyone who wasn’t living in a cave during the mid/late ’90s can recognize the song forever immortalized by Will Ferrell and Chris Kattan’s popular “”Saturday Night Live” skit. SNL has an interesting history with its sketches-turned-movies. The initial requirement for adapting five-minute sketches like It’s Pat, Coneheads or Wayne’s World into feature films is a loyal fanbase. Without said fanbase, the film has little influence in proving its saleability to a national movie audience. To the credit of all SNL films, good and bad, these sketches were classics that showed this promise. Yet time after time, with the exceptions of features like Wayne’s World and The Blues Brothers, SNL often failed to deliver even mediocre comedies out of their once-glorified skits. Moral of the story?{SNL movies are usually fated for failure (take the latest SNL bomb, MacGruber).

So, when A Night at the Roxbury previews surfaced, intense zeal spread throughout the SNL fan community. The sketches, originally dubbed “The Roxbury Guys,” were potent comedic gems, highlights of the already flourishing ’90s-era SNL. Ferrell and Kattan, often joined by guest stars like Jim Carrey and Tom Hanks, played two club-bouncing fellas whose incessant head-bobbing and embarrassing pick-up attempts served as the skit’s chief set-pieces. The jokes were often recurring from episode to episode, and the sketches offered virtually no story, thus forcing the film’s writers and producers to develop a movie from a relatively premature concept boasting a few hilarious running gags. Given the paper-thin material they had to work with, Roxbury could have fared far worse.

Barely eking double-digits on Rotten Tomatoes, critics unanimously agree on a few things. First, the pathetic club-dwellers, Steve and Doug Butabi. They were slammed as one-line characters bearing only a couple passing traits: airheadedness and more airheadedness. True, the brothers are utter idiots, but their stupidity is the vehicle that also makes them undeniably lovable, arguably as lovable as Wayne and Garth from the successful Wayne’s World. Hell, who wouldn’t want to be friends with these guys by the end of the movie? The Butabis’ excessive naivety is the chief vehicle that confidently steers the film in their own direction, a protagonist quality lacking in any “bad” film. Never mind police reports, car insurance or logical reactions, when actor Richard Greico rear-ends the boys’ van (I use the term “boys” purposely) the only thing on their minds is a ticket into the Roxbury, something Greico is happy to procure. It is this inanity that flip-flops the plot into one with some semblance of purpose.

Roxbury was widely heckled for being one of those movies in which all of the jokes the film had to offer were sprinkled in the trailers. Admittedly, many of the film’s jokes are hardly laugh-out-loud-worthy and are quite hokey, I’ll give everyone that much. But to anyone who claims the movie lacks humor certainly wasn’t paying attention. Roxbury fires jokes a mile a minute, often in the manner of punchlines a pick-up artist might toss out into a club of hot girls. (Sample line: “Are you seeing planes? Is your name Tattoo? Because swear to God, you’re living on Fantasy Island.”) Sometimes, the lines don’t make much sense; sometimes they’re just plain unfunny. But they all add up into a certain comedic voice specific to the writers and actors at hand. Perhaps the most prominent reason Roxbury failed to engage people is because of this esoteric humor. Comedy shows like “It’s Always Sunny in Philadelphia” and “Stella” function on a similar level, with jokes and character interactions appealing to only a certain crowd, a crowd that gets their humor. SNL skits are written to be enjoyed by their fanbase’s wide spectrum, but developing these skits into feature films forces the story and humor into more narrow shades which won’t be everyone’s cup of tea. Herein lies the fault with most SNL film failures.

Roxbury’s story might not be the most engaging affair, but the film is hardly an example of poor filmmaking. Director John Fortenberry knows how to make a scene work, from the spot-on blocking to the glitzy production design. He makes the very best of the minimal story written into the script. For example, when the Butabis are dropped off home after their wild night, Fortenberry takes a microcosmic element like the phone number the boys scored and turns it into a parodic climax. Even the dance sequences, albeit campy and unnecessary, are as fluidly choreographed as anything Hollywood has to offer. Does competent production value render Roxbury a great movie? No. But it does suggest an effort that’s worth well more than the harsh criticism it received.

It’s sad how the only universal quality critics seemed to hail was the 82-minute runtime. By the end of said 82 minutes, Roxbury just unfortunately has too much against it – a lukewarm plot, a lack of theme and an infinite cache of subtle in-jokes. Like any guilty pleasure, though, Roxbury achieves its one purpose as a film; it entertains us. Repeated viewings only enhance the film’s world, proving it to be an acquired taste. Some people have braved the initial bitterness to the tasty treat within. The film fades out on a typically Hollywood feel-good ending, with the Butabis dancing in their own nightclub with two beautiful women. Perhaps we feel good because the boys are so likeable, or because the boys finally realize that all they’ve ever needed were each other. Roxbury is the only vicarious tool we have to party it up with the best one-line characters comedy has to offer, and given the movie’s extreme quote-ability, many one-liners can sometimes be a good thing.