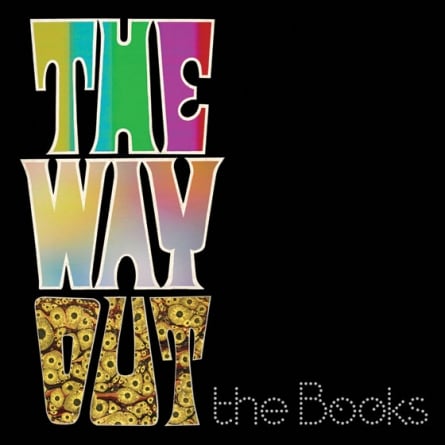 The Books are back- and they know the way out. Since 2000, Nick Zammuto and Paul de Jong have made music to fit Woody Allen’s worst nightmare: a universe expanding, stretched to the point of breaking. Their catalog is packed with pop songs pulled apart just so, like soft taffy strung out to mere wisps yet are still inexorably drawn to melodic structure. Ephemeral collages that juxtapose subtle string arrangements with found sound gems (often obscure vocal samples spanning disparate sources, from spelling bees to Godard films). In the five years since Lost and Safe, it appears that the Books have opted out of this universe to create (or at least hallucinate) their own. The Way Out is an unclassifiable constellation of diversity, absurdity and existential insight that breaks ground far from the low-intensity electro-acoustics or previous efforts.

Guided meditation sessions that open and close the record effectively tie together 42 intervening minutes that are otherwise all over the place. “IDKT” marks the album’s first true song, a funky number that’s almost accessible, until you hear the vocal track, broken and glitched to a chaotic rhythm. The chaos goes digital on “I Am Who I Am,” a heavy mix with lethargic, noise-metal leanings– like a Fantômas record melting in the sun. “Chain of Missing Links” features an unnamed logician, waxing philosophical on the immaterial nature of material, over a slack Boards of Canada groove. Through such different styles it’s the bits of context-free musings that keep The Way Out from sounding like a cut and paste job.

Other tracks stand out with a more pleasant appeal. “All You Need Is a Wall,” in particular, with simple guitar recalling Cat Power balladry (or the more fully realized, actual-music portions of Thought for Food). And psychedelic math lesson notwithstanding, “Beautiful People” plays warm and full with a three-part, church choir harmony (and trashy disco beat) that could make Kevin Barnes jealous. The humor is still there too, after all this is the band that recorded a song called “All Our Base Are Belong To Them.” It’s dark comedy on “A Cold Freezin’ Night,” where a homicidal brother and sister toss threats between tumbling funk riffs. “The Story of Hip Hop,” and a hundred other quips tucked into the corners of songs give The Way Out unusually high replay value.

Besides humor, The Way Out probes many pillars of humanity: pain and despair, youthful innocence, the vigor of individuality and the desire for connection. They lend artisan finish to an ambitious album that could have very easily come out a half-baked casserole of nonsense. The Books’ fourth LP is both entirely familiar and stunningly new– often even from track to track. The organic folk feel of The Lemon of Pink is long gone, and while that might take some getting used to, mind the old saying hidden in The Way Out’s closing seconds, “There’s no one right way to do the dishes.”

This author has not added a biography. Meanwhile Brady Baker has contributed 37 posts. Click here to view them.