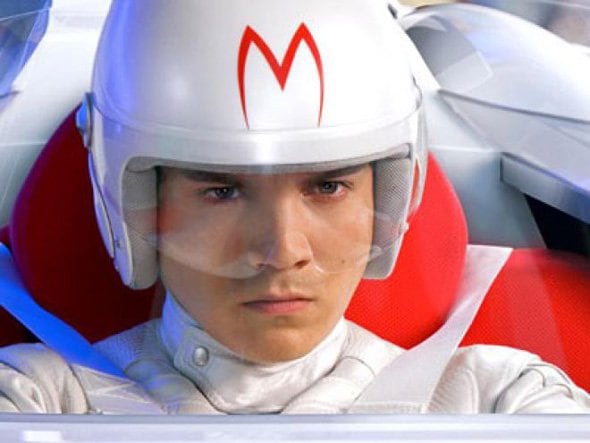 Speed Racer is one of the best films released in the last 10 years and I can prove it. Let’s try an experiment. Sit down and watch the first 17 minutes of the film, preferably with an open mind. Forget what you know or may have read about the Wachowski Brothers and their last few movies. Ignore the fact that Speed Racer is based on an old Japanese cartoon, a cartoon that has garnered a certain amount of ironic hipster cred amongst the more pop-culturally obsessed segments of the Gen-X crowd. Forget for a moment the advertising campaign and the Happy Meals and any reviews you may have read and simply sit down and watch the first 17 minutes of the movie. Everything from the opening credit sequence to the first appearance of Matthew Fox.

Okay. Now start again. Look at it shot-by-shot, even frame-by-frame. Notice how each image hits you with its own simple, iconic force. Hit the pause button. See how no matter where you choose to stop the movie, each resulting frame is a perfectly balanced composition? Do you think that’s an accident? And the colors: where have you ever seen colors like that in a film? Can you feel how the choice of palette is affecting your mind, making you smile almost despite yourself? This is a movie that is positively candy-coated. Go ahead and lick the screen, it’s okay – no one is looking. Tasty, right? Now watch it one more time, only this time paying particular attention to the construction, to the way it all fits together. Watch how each shot effortlessly flows into the next, every sequence seamlessly dovetailing with its successor, building up through dozens of minutely detailed juxtapositions the reality of this fantastical world and of the people that inhabit it. Think about the sheer amount of information that is being imparted to you and how easily it is going down. Past, present and supersonic future, everything is on the move – can you feel the awesome, crackling onward rush of energy, even in the scenes of exposition? Notice how the film doesn’t stop for a second, even while it is establishing the characters and their interrelations and motivations, showing through kinetic example the rules and special physical dynamics of the racing sequences.

Notice the stylistic choices the directors make – the angles and swipes, whip zooms and 360 rotations, close-ups and elaborate pans, streaks of light passing by the virtual lens, explosions of stroboscopic colors rioting free. Make note of how no choice is superfluous, how each meticulously story-boarded and planned out shot adds to the overall effect. Of course, being savvy, 21st century filmgoers, you will have discerned at once that this film was almost entirely shot on a green screen stage – the actors and a few tangible props are real, while the backgrounds and sets are wholly digital creations. This technique is not new, of course, but can you think of a time when it was used in such an aesthetically and thematically appropriate manner as it is here? The computer generated imagery is not designed to fool you into believing the world is real – it is clearly not. The digital confections establish the film’s hyperreality, its blending of past and future and world-that-never-was; a plane of existence situated somewhere between the screen of the theater and the screen of your mind, a place where it seems perfectly reasonable for the entire world to be captivated by the sights of race cars sliding and leaping and spinning through enormous loop-the-loops, across deserts and ice-encrusted mountains and M.C. Escher-like contraptions. It’s a world populated by people who posses more than the usual two dimensions of a cartoon character and less than the three dimensions of a fully-realized human being – they inhabit some in-between, fractal dimension of their own and the actors embody this unique, fantastic position splendidly.

Note how even the credit sequence pulls you into this unique and specific world, how Michael Giacchino’s remarkable score propels the action before any action has properly begun. From the black nothingness of the void the Speed Racer Universe begins. Let there be light – a shifting, churning, interlocking fractal kaleidoscope of color and form.

Now watch the rest of the movie and reflect back on those first 17 minutes, ruminating over just how much is established so elegantly. Of course you have the introduction of Speed Racer himself, played with an understated intensity by Emile Hirsch. You see him both in flashback and as a young boy (Nicholas Elia) – cute as a button, by the way, worshipfully devoted to his older brother, Rex (Scott Porter) – and in the present as an 18 year-old hotshot T-180 driver going for the record at the Thunderhead Raceway. I think it’s highly significant that the first scenes of racing we see in the film are in young Speed’s ADD-addled imagination – sitting bored in class one day the world around him suddenly bends and stretches and catapults his desk/car through the rainbow-scrawled pathways of his mind – for even in the “real world,” the scenes of car racing in Speed Racer are straight out of the hyper day-glo’d dreams of any boy or girl who has ever played with their Hot Wheels or Match Box cars, flipping and zipping and corkscrewing them around in “impossible” yet somehow plausible flights of careening splendor. You have the introduction of Speed’s love-interest, Trixie, both as a little girl (Ariel Winter) and as a teenager (Christina Ricci, in her most delectable role). The visual design of Speed and Trixie’s initial meet-cute is simply wonderful and romantic, with its blue skies and pink, pixelated hearts. The rest of the family make their appearances, too, each in an appropriate, characteristic way – Mom Racer (Susan Sarandon), concerned parent, poised, centered, yet worried for her son’s safety; Pops Racer (the always amazing John Goodman), iconic head of the Racer clan, gruff, bear-like, strong and focused; the full-on dynamic comedy duo of Spritle (Paulie Litt) and Chim Chim the chimpanzee, mischievous and hopped up on candy; and close family friend and Team Racer mechanic, the goofily awkward Sparky (Kick Gurry).

Notice the amount of back story that is rendered through the inventive use of the Greek chorus-like racing commentators, how they detail the story of Rex Racer’s rise and apparently ignominious fall while never stopping the action; and especially how this information affects our protagonist, Speed. Marvel at the inventive and groundbreaking use of flashbacks and -forwards, sequences embedded within sequences, recursive levels of time within time, each level reflecting the others, smoothly and elegantly morphing and blurring and erasing the boundaries between past and present, life and death, interior memory and exterior occurrence.

The entire sequence is bracketed by Speed’s preparation, execution and culmination of his record-paced run at the Thunderhead Speedway in his Mach 5 racer. We flashback to eight years earlier, Speed in class taking a test, then zip forward a week to see his mother discuss the results with his teacher, then back to the test, where we experience the amazing daydream racing sequence mentioned earlier. Then we meet Rex for the first time, quickly establish their brotherly bond before jumping forward eight years to Speed in the locker room before the race. Back to young Speed and Rex on the Thunderhead track, Rex teaching Speed how to feel the special mystical oneness with the car necessary to be a top notch driver. They punch it for the jump and something amazing happens – as the red car flies through the air towards the camera, the action slows down and we see a ghostly white phantom car trailing behind. As the two cars merge, whammo! we’re back in the now, the camera whipping around the present-day Speed as the white Mach 5 zooms down the same track eight years later. Time and space have collapsed and both a narrative and an emotional connection has been made. This technique, of the white car and the now phantom red car merging, precipitates each time another flashback.

Notice how the point of view so far has been Speed’s. But soon, within Speed’s overarching flashback, other characters experience flashbacks of their own, each time heralded by a particular camera motion, or rather character motion, the person in question swiping across the screen, present giving way to past as the pocket sequence begins. First Trixie gets her flashback. Then, within what is at first another Speed flashback, the POV shifts to that of Pops, ending with a close up on his face. Then the camera pans over to Mom and the flashback becomes hers. All of this within the larger framework of Speed’s reminiscences of the tragic history of his brother’s death.

The entire 17 minute sequence culminates with Speed chasing his brother’s phantom to the finish line, a phantom that only the audience can truly see. As he gains upon his dead brother’s record time, we can actually see this happening – see the two brothers, separated by time and death, racing to the checkered flag. Do you get it yet? Can you see how absolutely amazing this movie is? And this without even going into the rest of the film, which, while not as tightly wound as this opening sequence, is equally as good. I haven’t even mentioned the thematic threads that the Wachowskis carry over from the Matrix films – the Christian symbolism; the 2001-inspired transcendental vision at the end; the anti-corporate agitprop; the ultimate shattering of the Matrix-like construction that the characters inhabit and the birthing of a new and inspired world. Larry and Andy even found a way to make use of Matthew Fox’s uniquely inexpressive acting style – he is perfectly cast as the brooding and mysterious Racer-X.

Sometimes the critics simply get it wrong. They let their expectations cloud their judgment and lose faith in the simple act of looking at what is projected on the movie screen. Larry and Andy Wachowski were done a great disservice by the collective critical fumbling that accompanied the release of Speed Racer. I have a feeling that with time the consensus will change. Even now I can see the influence the movie has had and most likely will continue to have on the industry.

Thank you for participating in this little experiment of mine. I trust that I have adequately proved my point – as you can plainly see from my demonstration, Speed Racer is fucking awesome.

This author has not added a biography. Meanwhile Shannon Gramas has contributed 91 posts. Click here to view them.