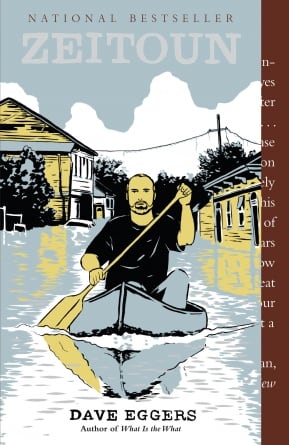 When the dust settles on the eight years of the George W. Bush administration, it is obvious 9/11 and Hurricane Katrina will stand out as the two most important national tragedies that occurred under W’s watch. As more and more evidence proves that negligence allowed both the terrorists to commandeer airplanes into the Twin Towers and for the levees to break in New Orleans, it may be time to stop playing the blame game and look for ways to heal our country. However, with the recent controversy over a proposed Islamic community center near Ground Zero, the 63% of the country that believe its placement is a “slap in the face” proves that even though the initial sting of these tragedies is fading away, the emotional scars and anger still exist and it needs to be pointed somewhere. And, unfortunately, a small band of religious zealots may have damned an entire religion in the eyes of many Americans.

In the past, I have found Dave Eggers’ writing to be too self-satisfied and too self-aware for me to really enjoy much of his work. However, when the author went to New Orleans following Katrina to put together an anthology of stories of those who survived the storm, he discovered a tale so shocking, and so telling of the ’00s, that it became Zeitoun, a non-fiction treatise so historically important that it should become required reading for anyone, from dyed in the wool liberals to those who wrap themselves in the Constitution so tightly they’ve forgotten the heart of the First Amendment. Pushing narrative non-fiction to its most compelling and investigative limits, Eggers invokes the spirit of Truman Capote in not only capturing an ugly chapter in American history, but also perhaps in distilling the Bush years zeitgeist so successfully that it puts to shame those cable news programs that have jumped ship and joined the entertainment business.

Abdulrahman Zeitoun is a Syrian immigrant who runs a successful contractor business in New Orleans. He and his wife Kathy, a convert to Islam, are popular members of their community, well-respected and reliable business owners who balance raising four children with meeting their customers’ demands. But when Katrina hits New Orleans, Zeitoun decides to stay behind to care for his properties while his family and the rest of the city flees for higher ground. We all know that the levees break; Eggers describes with painstaking detail Zeitoun’s journey around the city in a canoe, trying his best to help stranded senior citizens and feed dogs left behind by their owners. The first half of the book is a quiet odyssey as Zeitoun floats on the streets of his ruined city, surveying not only the widespread destruction, but also watching helplessly as roving packs of looters take advantage of the situation. Eggers creates a terrifying look at a city suddenly empty, a place where starving and frightened dogs howl at night and facedown bodies float by on streets that have suddenly become rivers.

Zeitoun already joins the ranks of indispensable works on Katrina, from the handheld camera footage of Trouble the Water to Spike Lee’s sprawling and exhaustive When the Levees Broke, but goes a step further by incorporating post-9/11 politics into the mix. The flooded city is just the beginning of Zeitoun’s struggle when, after a few days of salvaging food and saving stranded people, Zeitoun and some of his friends are arrested by a makeshift gang of local law enforcement, National Guard and mercenaries for hire under the suspicion of being terrorist agents. What begins as a horrific journey through a destroyed city becomes a twisty horror story as Zeitoun is shuffled from one prison to another without once being accused of a crime or getting a phone call to inform his family about his whereabouts.

Ten years ago, it would be almost impossible to believe a tale like Zeitoun could have happened in modern-day United States. No, this horrific police state belongs in some impoverished country or a corrupt police state where its citizens have no rights. While mainstream news no longer has the balls to chronicle such a shameful episode, we must be thankful that people like Eggers are willing to publish the stories of those often swept under the rug of history.

More than anything else, Zeitoun proves just how much attitudes on the notion of America have shifted in the past few decades. Or have they? Whatever happened to the idea of the melding of cultures? Sure, the waves of Italians, Irish and Jews must have met the same resistance as these new Americans, the Muslims and the Mexicans, do now. Zeitoun rips apart the notion of the “melting pot,” that glorified ideal that hides the true colors of the United States, the colors of fear, xenophobia and scapegoating.

Zeitoun is not a story that glorifies Islam or tries to make a case for Muslims in the United States. Rather, it is the story of an American family, one that just happens to practice Islam. By humanizing Zeitoun’s struggle, Eggers strips away the misinformation and lies fed to us by CNN and Fox News. Yet, despite all the horror, Zeitoun is a tale of optimism as well as a call for healing. Like his city, Zeitoun and his family are ripped apart by forces they cannot understand. But Eggers casts a ray of hope on New Orleans and on the Zeitoun family. We can only hope that from that decade of madness, America is able to look back and learn from its mistakes.