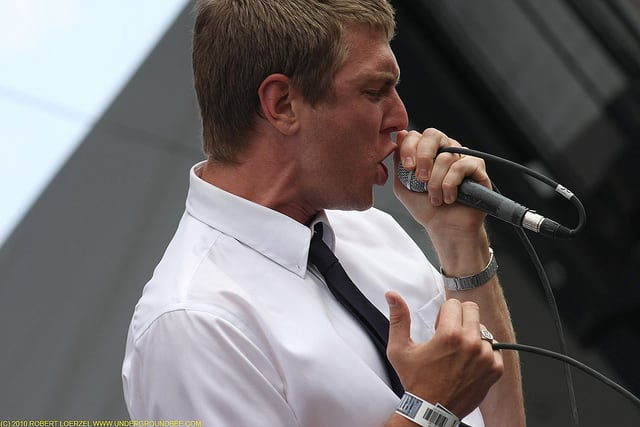 It’s difficult to stand around in surreally dreary weather with a few hundred others, only to get shepherded by ferry to an old and mysterious little island, and remember that you’re just going to be seeing what would otherwise be a normal show – not a festival, reunion or gimmicky promotion. On this particular evening, Grizzly Bear was performing with The Walkmen and Gang Gang Dance on Governors Island, a 172-acre island between Brooklyn and the lower tip of Manhattan. Though conversations regarding the island usually swirl around how much of a pain in the ass the ferries can be to wait for, the island itself is something of a hidden treasure that up until this year had been shielded from much art or performance. The sky was overcast with spurts of rain all night, and considering all the ingredients in play here, it could’ve made for a logistical disaster. But not a musical one. This was a Grizzly Bear show – not exactly the sunniest summer band – and they tread the line between eerily dark and eerily light better than pretty much any band out there.

As the first of three hometown teams, Gang Gang Dance came out to a sparse but attentive crowd to dish out their brand of wordless percussive psych-dance. Their set found them stretching out four songs – the first two brand new – to a total of 40 minutes, with polyrhythmic drumbeats, pitch-shifting vocal lines and video game guitar lines weaving in and out. While their time onstage was more focused on mood and groove than the songs themselves, they excelled at holding their own in front of two of New York’s biggest exports.

The sky grew darker, the crowd grew larger and out walked The Walkmen. Never a band known for its rabid fan base or revelatory live shows, they came into this bill as sort of the black sheep: older, wiser and less flashy than the bands preceding and following them. Coupled with a crowd of mostly young twentysomethings, the inclement weather and a temporary delay due to technical issues, the band had an underdog status that they didn’t end up beating. Beginning with the Sun Records-type bounce of “Blue as Your Blood” and “Angela Surf City” from their upcoming album Lisbon, the band struggled with monitor mixes and a chatty crowd, and it wasn’t until several songs in that they started to look comfortable. The band’s complete lack of stage presence (besides Hamilton Leithauser’s sometimes dramatic wielding of the mic stand) didn’t help matters much, but that’s something they’ve never had – no reason to expect that to change as they get older.

“All Hands and the Cook,” from the overlooked A Hundred Miles Off, was unleashed at the same time as the sky, finally bridging Leithauser’s wildly sustained screams to the crowd of hundreds who were until then more interested in the lower New York skyline. The menacing but fairly obscure song from their most poorly-received album was the clear winner of the night for the quintet, but the always-welcome “In the New Year” that followed was a close second. A few more new songs were played (including the horn section-infused “Stranded”), making it clear that the kinks have not quite been worked out; songs that were supposed to be hard-hitting, like “Woe is Me,” simply did not hit hard. After the new “Juveniles,” they were done, the short set (nine songs by my count) likely due to the sound delays and an eventual curfew. Their first two albums were ignored completely (no “The Rat”), much to the visual puzzlement of many concertgoers.

With no new album to plug and having already played their Big Outdoor Show in New York last year, it seemed that Grizzly Bear’s main obstacle tonight was to challenge the atmosphere in which it found itself. Could people forget that it was drizzling and muggy, or even better, could the complimentary cold and warm elements of their music play into the scene here? It was clear within the first few measures of “Showcase” that this would be the case. The lights strewn onstage, the woodsy backdrop, the city skyline, the sandy beach, continuous mist and rain all worked themselves into the band’s mechanical but ethereal sound. In other words, as long as you’re a person who at the very least can respect and appreciate Grizzly Bear’s music, it was just about perfect. Through a healthy mix of Veckatimest tracks and more ambitiously reworked older tracks, the band proved yet again that they’re one of the most skilled out there, both musically and in showmanship. The low-end, cathartic breaks in “Fine For Now” rattled through the chests of concertgoers at ten times the volume of either of the previous bands; the tripped-out twists and turns of “Lullabye” present on Yellow House were warped even further, highlighted by Christopher Bear’s schizophrenic drumming and bassist Chris Taylor’s work on various horns; mid-set renditions of “Knife” and “Two Weeks” caught some of the crowd off-guard but delivered to their fullest.

Despite the fact that a dramatic downpour of rain, which many overheard fans apparently wanted to get caught up in, never came down during Grizzly Bear’s set, the second half – including a transition from “I Live With You” into a haunting “Foreground” as well as favorite “On a Neck, On a Spit” – made it irrelevant. They’d cleared the hurdle of not just overcoming the idea of a bizarre setting but harboring it and playing into it. As the show ended, it was back in line, back on the ferry and back to reality. Very few other acts could have merged the escapism of a nighttime ferry trip to a strange little island with just as much musical escape.