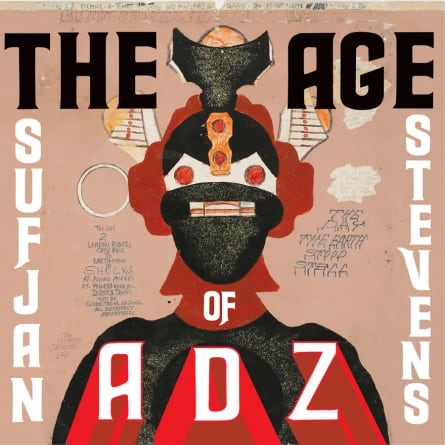 The Age of Adz

For many artists there eventually comes an album that, by sheer virtue of how different it is from that musician’s most “representative” work, splits fans into two opposing camps: those who love it and those who loathe it. For Sufjan Stevens, The Age of Adz is likely to be that album. Listeners still pawing their copies of Michigan and Illinois and clinging to that image of Stevens the Banjo Folkie in Angel Wings are gonna be in for a shock, as the record trades in his acoustic eclecticism for an electronic one heavy on beats, reverb, drum machines, assorted artificial sounds and compressed, echoed or otherwise treated vocals. In short, it’s tailor-made for howls of indignation from at least one segment of the musician’s fans.

What then of the actual content of Adz, putting aside whatever credit – or indie fandom dissension – Stevens will receive in so drastically breaking from Illinois‘ template? Anyone paying attention to Stevens’ previous work shouldn’t be entirely surprised by the record, as debut LP A Sun Came as well as parts of the All Delighted People EP hinted at the type of sounds that Adz fully embraces. Ultimately the album is inconsistent: at times ambitious and inventive, but more frequently self-indulgent, overlong and coldly technical. Stevens’ electro-tinkering occasionally succeeds, especially in the sparseness of opening track “Futile Devices,” the aural explorations of “Too Much,” the title track and “I Walked” and the vocal belligerence of “I Want To Be Well,” which finds the singer doing his best Thom Yorke impression and spitting out obscenity-laced lines.

At the same time self-editing is apparently not in Stevens’ vernacular, and many songs stretch out far longer (and with far too much dicking around) than plenty of sober minds will be able to endure. Indeed Stevens apparently never met a five-minute running time he didn’t like on Adz; over half the album eclipses that mark, while the sonic meanderings of songs like “Get Real Get Right,” “Vesuvius” and closing track “Impossible Soul,” itself 25 minutes long, become increasingly cluttered with repeated listens. The sense of breathing space that Stevens’ songs had in the past is missing here, but what’s perhaps more frustrating is that nearly every song has brilliant components – a lilting melody or poetic lyric about faith or death, among other topics – that eventually are overpowered by the song’s glitch-laden exteriors.

Electronic dabbling frequently has a way of making songs feel distant and hollow, and The Age of Adz is no exception, its thick layers of gadgetry preventing some of its songs from making any type of lyrical connection with the listener. There will of course be a tendency to dismiss all criticism of the album as curmudgeonly reactionary or as a sign of someone stuck in the Illinois–Michigan past, but this is nothing more than an easy out for anyone wishing to downplay its flaws. Certainly there’s no questioning the musician’s willingness to defy stylistic boundaries – plenty of veteran indie bands could learn a thing or two from Stevens – but Adz all too often fails to reign in its electronic excesses. The result is an album that is too heavy on the artificial and too light on anything precise to compliment the artist’s musical wanderlust.