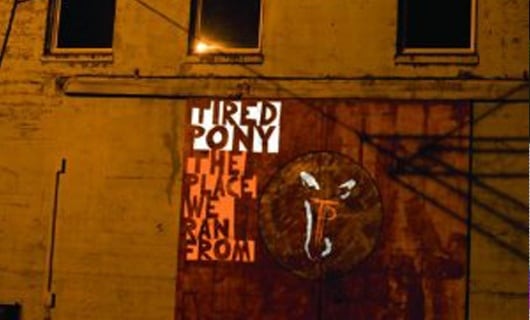 The Place We Ran From

There is an undeniable whiff of novelty to an Irish musician recording a country and Americana-influenced album; of course, among others from across the pond, an Englishman called Costello has previously done a similar thing and pretty competently at that. Gary Lightbody, best known as the frontman for Snow Patrol, is far less adept at convincingly invoking the spirit of these genres throughout Tired Pony’s debut album, The Place We Ran From, a record that plays out like a sopping wet, watered down imitation of the music it claims as its inspiration. There’s plenty of sincerity here – not to mention no small amount of admiration for country and Americana – but there’s also very little to suggest that Place is anything more than a middling, and dully predictable, foray into America’s musical past.

On paper, the album should be barn-stormin’ and shit-hot; in addition to Lightbody, Tired Pony includes Snow Patrol collaborators Troy Stewart, Iain Archer and Garret “Jacknife” Lee, Richard Colburn (Belle and Sebastian), Scott McCaughey (of Minus 5 and R.E.M. 2.0) and Peter Buck. The album also boasts contributions from M. Ward, Zooey Deschanel and Editors’ Tom Smith. But like so many other supergroup efforts, the whole isn’t very good and the parts aren’t much better. To be fair there are a few standout moments: Buck’s guitar work is masterful; Deschanel’s vocals on “Get on the Road” are so good that they sound as if Lightbody wrote the tune with her in mind; Ward provides an appropriately hazy guitar line to “Held in the Arms of Your Words,” a soft ballad with a ridiculously nonsensical title; Smith’s singing lends an obvious sense of gravity and guilt to “The Good Book,” a song of closed-down bars, lonely nights and half-empty glasses of booze. But that’s also as close as Lightbody gets to writing a memorable Americana song, though occasionally his lyrics are almost evocative enough to offset the excessively banal arrangements, particularly on “Northwestern Skies,” “Dead American Writers” and “The Deepest Ocean There Is.”

Though there is no questioning the participants’ sincerity in this project and it’s clearly not a lark, this same earnestness makes these songs feel painfully straight-laced and stilted. It’s collaborative, sure, but the amount of teamwork involved is largely irrelevant when the results are so meager, as in Archer’s “I Am a Landslide,” which is both exceedingly delicate and more than just a wee bit saccharine. Despite Lightbody’s self-stated goal of writing a “twisted love-letter to the States,” there is very little here that suggests the result is anything other than another example of formulaic country-infused music.The Place We Ran From ends with several minutes of feedback squall via “Pieces,” a much-too-late attempt to apply some sharpness to the album’s mostly blunted edges. Lightbody deserves credit for moving away from the personal narratives he churns out with Snow Patrol, but that’s of little use here, and Place simply skims along the surface of Americana without really channeling any of its dark, mysterious landscape.