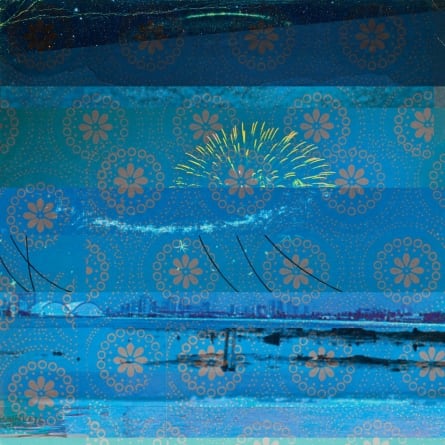 If you wanted, you could reduce the current crop of electronic music to two prevailing philosophies. The first emphasizes the electronic aspect of the music, showing its seams and inorganic properties while the second strives to find a way to make the music seem truly alive despite its binary origins. Glitch versus chillwave, Flying Lotus versus Animal Collective- there are commonalities but the fundamental purpose of either is too different to ignore. On Lucky Shiner, Gold Panda does his best to force the two worlds to come together, grafting organic fuzz and hum on top of inorganic noises, randomizing the beats of natural samples, all to make electronics move like living organisms.

The first clue that this is what Gold Panda is hoping to achieve comes in the vinyl hiss that coats almost the entirety of Lucky Shiner. Utilized as a flavoring, this hiss grants even the most electronic of Gold Panda’s compositions, such as 8-bit slow burner “After We Talked,” a nostalgic glow, giving the songs the appearance of relics. Like the video game composers who had to use MIDI for its size, not its sound, Gold Panda treats the digital aspect of his tool as a challenge that foster creativity- leaning on arpeggiators, for instance, is nothing new – but in Gold Panda’s paws, it’s different, a technique for finding counter-rhythms instead of a way to circumvent a lack of technical ability. Where those composers simply couldn’t tack an actual symphony recording onto a cartridge and were forced to get creative in their problem solving, Gold Panda is similarly minded, despite his obstacles being self-generated.

Masterpiece-in-miniature “India Lately” is the epic that the rest of Lucky Shiner builds towards, its purposefully off-kilter rhythms a seeming response to the prompt of “find a way to make digital percussion seem perfectly imperfect,” the string and vocal samples dropped into the structure like individual MIDI components rather than actual instrument sounds. Closing number “You” acts as the melancholy coda to “India Lately,” the digital percussion normalized here in order to let the tragical vocal sample breathe its last breaths in uncluttered peace.

Of course, the haunting electronic track is almost a cliché now so it’s to Gold Panda’s credit that his emotional paintbrush has more than dark hues on its palette. A glimpse through the rest of the tracklist yields an apparent plethora of color options: “Vanilla Minus” is the butterflies-in-the-stomach anxiety that comes with meeting someone new, “Same Dream China” is the moment in the story where things are just starting to come together for our protagonist, “Marriage” suits its title perfectly. It’s not all so heady, though – “Before We Talked” is an excellent sample of Gold Panda’s playful side, with a keyboard line that sounds like the beginning of an especially colorful Genesis game.

There are certainly plenty of options that support the electronic music as digital life camp lately but Gold Panda’s skills in creating such a wide range of emotions are particularly rare, even amongst the best the class of 2010 has to offer. Lucky Shiner stands as a testament to how far electronic music has evolved in the past few years, its sound just as committed to the hazy world of dreams and feelings as chillwave’s top tier but more subtle and evocative in its execution while maintaining the adventurous playfulness of the Warp set. It’s this hybridization that makes the difference – where others are trying to make their electronic compositions seem alive, Gold Panda is actively carving emet into this golem’s forehead.