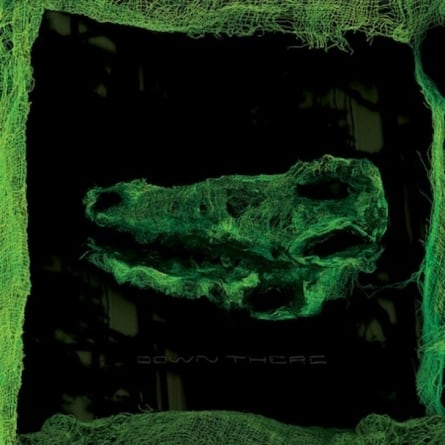 As one third of Animal Collective, Avey Tare (a.k.a. David Portner) employs a wild and unhinged vocal style, contrasting the glowing harmonies of bandmate Panda Bear. On Spirit They’re Gone, Spirit They’ve Vanished, an early Animal Collective album written solely by Portner, he reveled in lo-fi production and live recording, helping to create a menacing affair made all the more inaccessible by its daunting runtime. His new, solo Down There is similar in its application of manic instrumentation, but compared to Spirit, this album is a focused and coherent exploration of the relation between sound and lyrical content.

As insinuated by the crocodile imagery of the cover, Down There is steeped in swampy electronics and dark imagery. “Laughing Hieroglyphic” begins with indiscernible, brooding voices that build over rolling hand-claps and murky synth. The depths of the opening track immediately set the mood for the rest of the record, which explores ideas of anger and identity. “It’s so easy to get lost in the mixture,” says Portner over top of the bouncing beats, contrasting the sinister imagery with a haphazard and haunting electronic atmosphere. On the other end of the spectrum, “Heads Hammock” pounds out gloomy bass triplets, providing one of the more structured and accessible songs on Down There.

Down There seems to hold a middle ground between the lavish and joyful expressions of Animal Collective’s Merriweather Post Pavillion and the schizoid freak-outs of their earlier, less-focused work. Portner expertly jumps between controlled nuance and unhinged experimentation, continually structuring a landscape that refuses to settle in one place. “Oliver Twist” chugs along with a mechanical monotonous, making way for the foreboding hissing and washed-out sounds of “Glass Bottom Boat.”

As his work with Animal Collective has shown, Portner’s musical focus seems almost to be creating an abstract sonic structure that pushes the limits of accessibility. Still, as Portner obscures each track both musically and lyrically, we are invited into a very personal record. The aching pulses of “Ghost of Books” or the scattered buzzing of “Lucky 1” deepen the dark and schizophrenic themes present throughout the album. On “Laughing Hieroglyphic,” Portner screams, “When I get fucked up/ I do the best to make myself not fucked up again/ My heart and my lungs do/ Why can’t I do the same for everyone I love too?” These painful musings anchor the sporadic electronic elements, providing Down There with a compelling yet unstable sense of direction.

Down There doesn’t add much to the story of Animal Collective and Avey Tare. In fact, anyone who has been following Animal Collective for some time will not be surprised by much on Portner’s solo effort; his defining wail and active experimentation are wholly intact and effective as ever. Even though most of the music and themes on Down There are well-explored territory for Portner, there is something to be said for creating an album that consistently delivers such an ethereal listening experience.