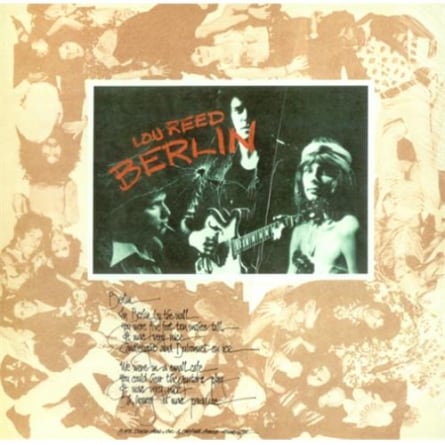 Lou Reed’s 1973 concept album Berlin has a reputation as one of the bleakest, most depressing albums ever made. On its release, it was a failure with most critics and audiences, although it did reasonably well in Britain. It was Reed’s third solo album, following his little-heard eponymous debut and his huge David Bowie-produced glam rock slam Transformer. Reed rarely courts his audience and, perhaps recoiling from the Bowie-aided success of Transformer, said of Berlin: “This is going to totally destroy them. I told people I was gonna do that. They throw me in so many categories. This one will show them I’m not kidding.” It’s as if both he and his fans had to suffer for enjoying “Walk on the Wild Side” and “Satellite of Love.”

Yet is Berlin that depressing? And why were people surprised? This is the man who wrote “Heroin” and “Perfect Day” after all. In one of the harshest reviews, Rolling Stone claimed that “there are certain records that are so patently offensive that one wishes to take some kind of physical vengeance on the artists that perpetrate them.” While Rolling Stone has never been very progressive or cutting edge, this seems comically off the mark. Offensive? In 1973? In a time of Nixon, Vietnam and the bad hangover of the 60s? Lester Bangs, in a not totally unfavorable review, called it the “bastard progeny of a drunken tumble between Tennessee Williams and Hubert Selby, Jr.,” which, like a lot of Bangs, sounds good but doesn’t mean much. Somewhat more lucidly he labeled it “a gargantuan slab of maggoty rancor that may be the most depressed album ever made.”

Reed’s starting point was the song “Berlin” from his solo debut. The revised “Berlin” is a piece of smoky Weimar cabaret that could be a low-key companion piece to “Perfect Day.” And like decadent cabaret, it is a little kitschy, as much of the album threatens to become. There was a tendency in the ’70s toward orchestrated bombast and what is striking to a younger listener of Berlin is that it seems very much of its time, both in terms of music and its concept/song cycle/rock opera structure. It features middle-brow British musicians like Jack Bruce (Cream) and Steve Winwood and was produced by Canadian Bob Ezrin, who had made his reputation with schlock rocker Alice Cooper and would later co-produce The Wall, which would make an unholy, suicidal double feature with Berlin. Ezrin later called Berlin “music to cut your wrists to,” which is what one of the album’s main characters eventually does.

After “Berlin” sets the mood, it’s followed by “Lady Day,” which could be an allusion to Billie Holiday; Reed no doubt would have been attracted to a brilliant junkie singer who had troubles with men and died young. The lumbering “Men of Good Fortune” contains some of the album’s most clichéd lyrics: “Men of good fortune/ often cause empires to fall/ While men of poor beginnings/ often can’t do anything at all.” The rich are powerful, the poor are weak and Reed is not so much sympathetic as indifferent, singing in a flat voice, “But me, I just don’t care at all.” On the song Reed is an apathetic stage manager to a nihilistic wasteland of wrecked lives and drugged up/drugged out human drama; it’s Our Town re-staged with speed, suicide and bisexuality.

Though an album about Caroline and her lovers, she isn’t named until the fourth song. As a song cycle or rock opera or whatever you want to call it, Berlin is remarkably lazy, with no sense of narrative and only two real characters, both of whom are hardly developed. What’s most striking about listening to the album now is how bloated it is. Lyrically, it may have been out of step with its era, but musically it shares something with both arena rock’s bombast and prog-rock’s self-importance. The production frequently smothers the songs in strings and horns. The lean, aggressive rock energy of the Velvets is completely absent, although several songs recycle bits from Velvets outtakes and demos. Those familiar with various non-album Velvet tracks will recognize parts of “Oh, Jim,” “Sad Song” and “Caroline Says II,” which shares a line with “Stephanie Says” about a girl called “Alaska,” but lacks that song’s fragile grace.

It’s 10 songs long, but really only gets going on the seventh track, “Caroline Says II,” which opens with the brutal line, “Caroline says/ As she gets off the floor/ Why is it that you beat me/ It isn’t any fun.” Unlike in his other “says” songs (“Candy Says,” “Stephanie Says,”), Reed doesn’t seem to enter into the character at all, instead remaining aloof and simply presenting a really ugly situation. Again, the heavy-handed production undermines the song’s emotional impact, walloping the listener in the face and negating the song’s emotional impact. This is followed by the harrowing, nearly eight-minute long “The Kids,” which is the album’s de facto centerpiece. It’s about Caroline losing her kids because “she was making it with sisters and brothers” and doing a lot of drugs. Reed casts a jaundiced eye on the scene, proclaims himself the “waterboy” and the song ends with the sounds of children screaming and crying for mommy (actually the producer’s children), which is unpleasant and a little sick. Berlin ends with the overwrought “Sad Song,” which is too long, burdened with cheesy musical arrangements and not very sad, despite its name.

After its critical and commercial failure, it seemed as if Berlin was doomed to languish in semi-obscurity, a divisive cult album too bleak and uncompromising to ever get the attention it deserved. Reed was bitter about it’s reception, saying, “There are people I’ll never forgive for the way they fucked me over with Berlin. The way that album was overlooked was the biggest disappointment I ever faced.” A planned staging of the album was understandably scrapped. In recent years though it has become something of a rehabilitated masterpiece. In 2003, Rolling Stone recanted and included it on the magazine’s greatest 500 albums list. Then, in 2006, Reed took a page from ATP’s Don’t Look Back series and staged/performed the album in its entirety at St. Ann’s Warehouse in Brooklyn. Accompanied by strings, a choir, original producer Ezrin and guitarist Steve Hunter and high profile back-up singers Antony and Sharon Jones, the concert was released as an album and a film, directed by Julian Schnabel (The Diving Bell and the Butterfly). The live version actually has more rock vitality and is less slathered with bad production than the album. Berlin is not the most depressing album ever – other albums like Closer, Songs of Love and Hate and Pink Moon are more devastating – or even Reed’s most depressing work, for that matter. I’ll take the seven minutes of “Heroin” over all of Berlin any day.