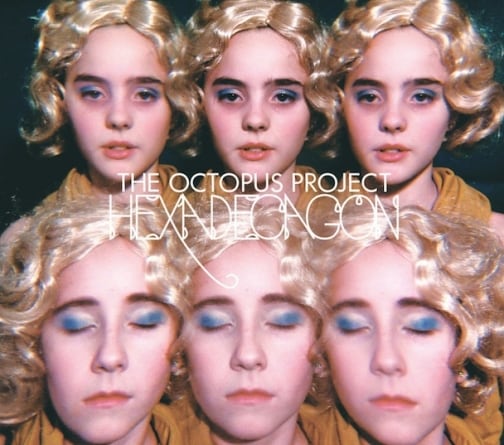 It’s probably not fair to judge a band based on their name, but my first reaction to Austin quartet the Octopus Project — before I heard a note of their music — was, “Boy, that’s a dumb name.” The octopus, while fitting in with indie’s love of animal band names, comes off as twee, while the project part conjures up memories of the Alan Parsons Project, something nobody should be reminded of. Further initial turn-offs include the geometric title (a 16-sided figure) and the name of their label, Peek-A-Boo. On the plus side, the cover is by fellow Austinite Wiley Wiggins (Mitch from Dazed and Confused) and though the band is instrumental, they are mercifully free from the somberness and anonymity that plagues many such bands (Godspeed, Mogwai). They represent the more playful and whimsical side of the spectrum, perhaps to a fault, as they have a penchant for silly song titles like “Fuguefat” and “Korakrit.” Some call them “indietronica,” which if you can stomach that tag, is a decent description.

Hexadecagon is their fourth full-length album, which they have already performed in its entirety at South by Southwest and in a Whole Foods parking lot with a video component. In a move recalling the Flaming Lips, it was conceived as an eight-channel sound and eight-channel video (hence the title) piece. The album’s eight songs incorporate some of the Lips’ expansive space-rock, especially the warm, symphonic sweep of The Soft Bulletin, as well as Stereolab’s space-age electronics. The crisp production – by John Congleton (Walkmen, Explosions in the Sky) – and layered instrumentation of lead-off song “Fuguefat” sound like the Sea and Cake at their most spirited, which is followed by the buoyant “Korakrit,” the most Lips-like track, although without their weirder edges.

The album moves on to longer and more involved songs. The sound of crackling speakers opens up “A Phantasy” and the gentle, chiming space-rock does invoke magical lands before gaining some momentum and ending up with a sound that is the aural equivalent of day-glow spaceships. “Circling” breaks the 10-minute mark and sets itself up as the album’s epic centerpiece, but it ends up more exhausting than exhilarating. Trippy, bubbling keyboards that evoke Animal Collective kick it off, but it soon transforms into something faster and sleeker, but it also has a potential energy that is never quite realized. It ends up drifting away into a rather bloopy, aimless Enoesque soundscape before segueing into the next track, “Toneloop,” a languid mood piece with a woman’s vocals far in the distance. The sugary “Glass Jungle,” which sounds as if it incorporates vintage arcade sounds, returns the album to its happy mood, as does the lush, keyboard-driven “Hallucinists,” which could soundtrack the arrival of spring in the robot village. Hexadecagon closes with another long-ish track, “Catalog,” which goes from cosmic and mellow to sounding as if it were hijacked by Kevin Shields, then back to mellow and twinkling again, leaving the listener floating in the ether.

Energy and enthusiasm are a band strength, which it shares with another instrumental band, Louisville’s Parlour, who also recently released an album with an odd title. Unlike a number of post-rock/instrumental acts, Octopus Project is not heavily indebted to the Germans or the Chicago school and they aren’t too cerebral or difficult. It’s bright, cheerful instrumental music and while the Octopus Project are among the most accessible and likable of instrumental acts – known for fan-friendly, euphoric live shows – it’s not enough to really make Hexadecagon, despite its ambitions, a satisfying record that bears repeated listening.