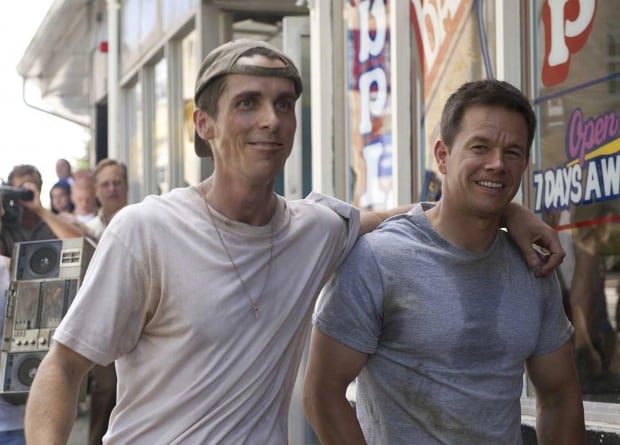 Have you had enough of Boston in the movies? Ever since Good Will Hunting, it seems Ben Affleck has made it his goal to get Beantown love and respect in film. Hell, even Martin Scorsese jumped on the bandwagon with The Departed. But it’s not the Bostonian blue bloods they want us to see, but the rough tumble world of the “Southies” and other outlier neighborhoods. But seriously, Gone Baby Gone, The Town and it’s time again to grab a tonic in David O. Russell’s The Fighter.

Although The Fighter stars Mark Wahlberg (shit! He was in The Departed too!) as boxer Micky Ward, the film is overwhelmed by Christian Bale as his charismatic, crack addled-brother Dicky Eklund, once the pride of Lowell, Massachusetts for “knocking down” Sugar Ray Leonard in a fight. The film begins with Dicky, nearing 40 years old, and attempting to mount a boxing comeback. Meanwhile, the younger Micky is a “stepping stone” fighter, the type of brawler that contenders beat to further their career. Under the guidance of Dicky as his manager and trapped in the Svengali-like clutches of his mother Alice (a take no prisoners Melissa Leo), Micky and his career are going nowhere and fast.

Going for a straight narrative after the metaphysical mindfuck of his last film I Heart Huckabees, Russell spends much of The Fighter exploring the familial tangle of Ward’s family. Like Raging Bull, The Fighter tries to create parallels between the ring and squabbles at the home front, especially the Micky’s coiffed, makeup-caked seven sisters that hover around Alice like a murder of harpies ready to do harm to anyone that crosses the family. Although Russell’s camerawork often apes Scorsese at his most frenetic, the best decision he makes is to film the fights in the grainy HDV that HBO uses to shoot boxing matches. This technique adds veracity and immediacy to the fights, some of which are quite brutal.

Micky’s fortunes change when he falls for Charlene (Amy Adams), who convinces the boxer he is not a “stepping stone,” but a talented boxer. Anyone who knows anything about the sport knows that Micky will eventually work his way up the circuit to become the real deal (his bouts with the late Arturo Gatti are now stuff of legend), but first he most overcome an even bigger adversary, getting out from underneath the shadow of Dicky and escaping his mother.

Which brings us back to Christian Bale, giving a performance that matches any brutality we see in the ring. Returning to the twitchy, skeletal gauntness he showed us in The Machinist, Bale threatens to veer into hamfistedness, but never tips over the line. Sure, he may overshadow the other actors in the film, but it gives him a chance to stretch after more restrained turns in Public Enemies and The Dark Knight. Yes, The Fighter is about Micky Ward taking on opponents in the ring, but it’s equally about Dicky Eklund boxing with his demons. It’s pretty obvious which is more interesting.