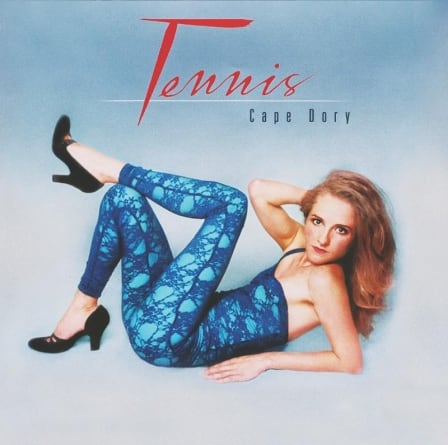 It’s going to be hard for just about any music critic, myself included, to review Tennis’s Cape Dory without using diction normally reserved for cheap travel agency advertisements. The musical married couple that is Tennis, comprised of Alaina Moore and Patrick Riley, sailed around the East Coast for eight months or so and after hitting land again, wrote what has now become their debut album, titled Cape Dory, a dull retread of some of beach pop’s most obvious influences and trends. Though not without the occasional tune worthy of merit, it can be hard to get excited about the straightforward, catchy hooks when they are surrounded by such monotonous wordplay.

From the breezy imagery, sparse percussive elements and lightly fingerpicked electric guitars, Cape Dory is a pretty gentle and unobtrusive affair throughout. “Take Me Somewhere” takes a few looping chords, punctuates them with some tender “oooo’s” and “aaaa’s” while laying them over a hazy, barely present pillow of synth. Songs like “Marathon” and “Seafarer” build upon that premise, reveling in placid harmonies alongside blasé stories of hopping on a boat and leaving the world and all its responsibilities far behind. It’s a tiresome and lazy theme that infects Cape Dory like a bad case of seasickness. Even the guitar solos, like on blog-darling single “Pigeon,” are inoffensive ascending/descending runs brimming with heavy doses of echo and reverb.

If Best Coast’s Crazy For You was the female stoner version of sun-kissed pop rock, then Cape Dory is the privileged socialite twin sister, pretty upon first glance but lacking a necessary depth of emotion, humanity and experience. Tennis consistently takes the safe route on their debut album, digesting and spitting out worn-out imagery and sounds like clockwork. Counting the number of times Moore uses the words “beach,” “sand” or any other water/sailing-related imagery throughout Cape Dory’s mercifully brief 28 minutes is like trying to count the number of times Dragonforce use the words “fire” and “storm” during the runtime of Inhuman Rampage. “We can play in the sun holding hands/ And nap through the day on sun-bathed sands,” coos Alaina on the shimmery “Cape Dory,” vividly portraying a sense of absolute meaninglessness that plagues the entirety of the album. It’s simplicity for simplicity’s sake, too afraid to move into areas of conflict, edginess or actually hint at something beyond surface level – Florida postcard descriptions. To riff on the album’s own well-trodden metaphor, Cape Dory presents the illusion of thematic profundity that runs as deep as an ocean, but in actuality prefers to wade in the kiddy pool near the hotel.

Cape Dory doesn’t come without its occasional merits, but they are severely limited in scope and range. “Marathon” and the title track use some interesting time signatures and bridge structures to disrupt the otherwise complacent pacing of the album, while Moore’s voice is smooth and welcoming on every track, a comforting necessity if we are to spend any time trying to get wrapped up in the album’s one-dimensional, tranquil atmosphere. Ultimately though, the few highlights are swamped by dreamy pop affectations that struggle to stand on their own wearisome legs. This isn’t the transcendent musings of Teen Dream or the energetic, balls-out fury of King of the Beach, both of which use their sun-drenched images to hint at a deeper well of existential meaning. Instead, Cape Dory is a hollow, conceited, dull and dare I say, repulsive downgrade of the lo-fi, beach-pop sound.