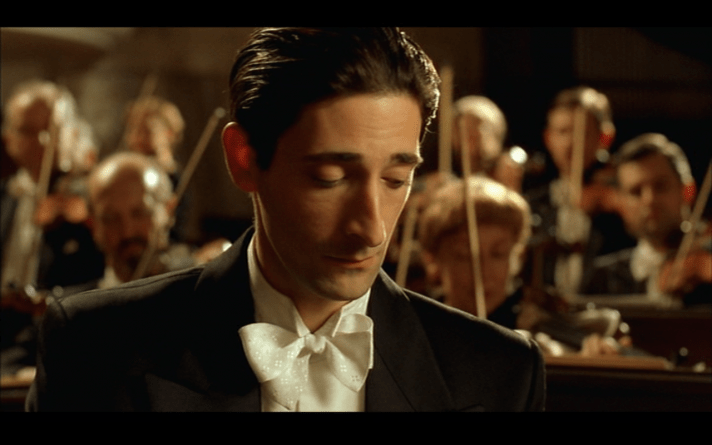 There is an interesting trend in Roman Polanski’s oeuvre that may go unnoticed if you’re not looking for it. Right before each of the director’s three best films- Rosemary’s Baby, Chinatown and The Pianist, Polanski put out one of the silliest films in his body of work. Just look. Before Rosemary’s Baby came The Fearless Vampire Killers, a campy horror-comedy, before Chinatown he directed What?, easily one of his worst movies, featuring Sydne Rome running around naked in a twisted Italian villa and before The Pianist came The Ninth Gate, a dreadful, inept horror film that took all the elements that made Rosemary’s good and distorted them. Each of these three films is a classic in its own right, but when compared the movie that came directly before it, they become miracles.

The Pianist is Polanski’s “important” film, netting him his only Academy Award for Best Director (as well as winning the 2002 Palme d’Or at Cannes and numerous other awards). Both Rosemary’s Baby and Chinatown tread on B-movie conventions- horror and noir- but The Pianist takes place in the milieu Academy voters love best: the Holocaust.

Based on the true story of Władysław Szpilman, a famous Polish Jewish pianist portrayed here by Adrien Brody, The Pianist chronicles Szpilman’s miraculous survival in war-torn Warsaw during World War II. Beginning with the rumblings of German occupation, the first hour follows Szpilman as he and his family are carted off to the Jewish ghetto and forced to survive in Warsaw under Nazi rule. Like other World War II films, the first section of The Pianist depicts the degradation of the ghetto in grim detail as Szpilman and his family must learn to survive in the new world. But, when the ghetto is liquidated and all the Jews are shipped out to concentration camps, Szpilman is miraculously spared and from here The Pianist becomes an urban survival tale as the pianist moves from one clandestine location to another, all the while avoiding not only the Nazis, but starving and freezing to death.

So is The Pianist a Holocaust drama, cat-and-mouse chase film or something entirely different? When the Szpilman family decides to remain in Warsaw, despite fair warning of the impending storm, we all know they are doomed. An unfortunate trend in Holocaust films is the need to one-up the prior ones in the monstrosity department. While these horrors undoubtedly occurred, it feels like each new film featured a new way to kill off their Jews. When talking to my wife about The Pianist, she remembered it most for the scene where the Nazis wheel a crippled man out of his apartment in his wheelchair and dump off the balcony. And it’s true, images like that one stay with you.

Yet, The Pianist isn’t meant to titillate you the way other Polanski movies are clearly marked to do. He wisely leaves any psycho-sexual possibilities of World War II to Paul Verhoeven and stands out of the way as the narrative unfurls. This may very well be the only Polanski film thus far in his oeuvre that doesn’t feature rape. Probably because of just how close the director is to the source material.

As a child, Polanski himself survived the Holocaust. Like Szpilman, his parents were sent away to concentration camps (where his mother would eventually perish) while the young Polanski survived the Krakow ghetto by escaping through some wires. As the war waged on, Polanski hid with Catholic families in the Polish countryside before reuniting with his father in 1945. Polanski has no choice to be reverent with this material because he lived it.

That said, the director never emotionalizes the experience like many other directors tend to do. Szpilman is no hero. He doesn’t shoot his way out of the ghetto or lurk in the shadows, jumping out behind stray Nazis and slitting their throats before slipping away under the cover of dark with their guns. Instead, Brody’s Szpilman is a passive character who does little but focus on survival. A large portion of the film’s second act finds the character hiding in empty apartments and doing little more than looking out the window and scrounging around for food.

There are no campy, Satanist next door neighbors or macabre nostril-slicings in The Pianist. Rather, Szpilman is a cipher for the director himself. Polanski uses Brody and Szpilman as a mirror, a miraculous survival story as fortunate as his own. Like Szpilman, Polanski does not deny what he has lost and clearly shows us how the kindness of strangers and sheer good fortune are what kept him alive. Underneath the horror of a bombed out Warsaw lies a wary mixture of gratitude and disbelief. It’s the closest Polanski will ever let us get, a meditation on a part of him that died, a way to remember a time and place engulfed in madness that is much more frightening than a demonic baby or a silly Satanic tome.