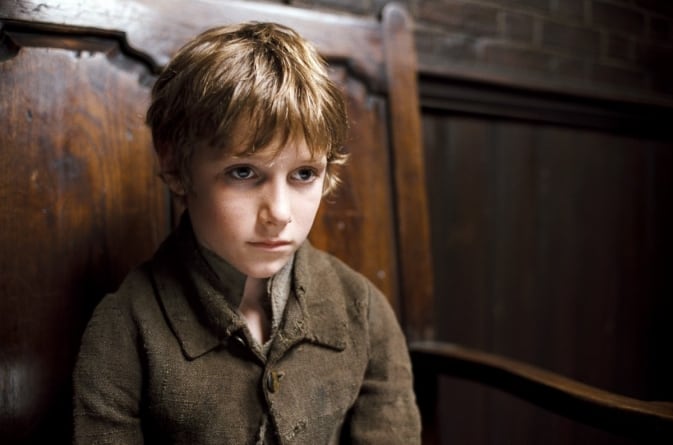 Polanski’s motivation for Oliver Twist was to make a relatively kid-friendly film to show his children, and Victorian society’s cruel apathy towards unwanted children is no doubt lighter fare than the Holocaust. Even so, it makes sense for Polanski, whose Holocaust prestige picture was so lauded that it couldn’t not beget another prestige-y film, this time with sprawlingly extravagant widescreen street views featuring dozens of costumed extras, horse-drawn carriages and glorious Victorian-era facial hair. While Charles Dickens’ story of the little orphan nobody loved seems as old hat as making yet another Jane Austen movie, the last film adaptation was Disney’s animated Oliver and Company (1988) and the last live action version was two decades prior to that in the form of the musical Oliver! So, a bit of big-screen treatment for Oliver is certainly not unwelcome, especially because society needs a reminder of how children used to be treated in the days before labor laws and Pokémon.

The story of Oliver Twist is an odyssey of neglect, abuse and general Victorian waif-boy unpleasantry. An orphan boy named Oliver Twist (Barney Clark) finds himself put in a children’s workhouse, where his starved, overworked peers elect him to ask their cruel overlords for more food. The overfed fat men who run the workhouse are aghast at the idea that a hungry child would want food, so they try to punish his insolence by selling him to a chimney sweep, but the government officials approving the sale realize that the kid is miserable and refuse to sign.

Polanski opens the film with imagery that feels like afterimages from The Pianist. The workhouse itself is a gas chamber away from Auschwitz – the children, all in rows on benches and dressed in soul-numbing grays, pull apart old bits of rope in order to reconstitute them into new rope and dine on tiny servings of gruel in a room with big oppressive banners: “GOD IS HOLY, GOD IS TRUTH,” which may as well be arbeit macht frei. The treatment of kids in this film is so amazingly heartless by 21st century standards, and the cruel adults so obtuse to basic human rights that it may come off as hilarious, but it’s part of the point, as Oliver Twist was apparently Dickens’ Upton Sinclair moment, bringing the truth of street urchin torment to the masses.

Instead of becoming subject matter for one Decemberists song, Oliver becomes fodder for another, going to a kindly but spineless coffin-maker, whose wife and maid feed him dog scraps and whose excessively antagonistic apprentice verbally abuses him until Oliver goes apeshit on the other boy, suffers a reluctant beating at the hands of the coffin-maker and walks 70 miles to London. And it just goes on like this, turning into an endless cycle of despair: someone is terrible to Oliver and, just when all seems lost, someone is kind to Oliver, throwing him a bone by not selling him to a chimney sweep or not letting him collapse and die on the road to London. This moment of kindness goes on to bite Oliver – and, later, the people who help him out — in the ass.

The rest of Oliver Twist, starting with the second act, is a bit like Season 4 of “The Wire,” where you meet these charming street kids and desperately want them (or, in this case, just Oliver) to make good, but he only falls back into the game against his will. The amusing, be-tophatted kid pickpocket Artful Dodger (Harry Eden) would be a blending of Randy and Donut, while the quiet, well-mannered Oliver is Dukie, both of whom are generally disliked and treated poorly by most of the other characters. It’s here we also meet Fagin (Ben Kingsley), the kind of well-meaning but also devious elderly leader of the kid pickpockets, his violent, evil associate Bill Sikes (Jamie Foreman) and his flamboyant, Joker-like accomplice Toby Crackit (Mark Strong).

Characters who are pariahs at every turn aren’t new to Polanski’s films, but Oliver is the weakest character in the whole film. Clark is fine in the role, but it’s a thankless one that mostly requires saying “please” and “sir” a lot and take a good beating every now and then. Outside of the first 30 minutes, he has no agency and soon becomes a McGuffin for both the cops and the criminals. For a good part of the third act Oliver’s barely even there, but strangely he’s not missed thanks to the spirited performances of all the adult characters, especially Strong, who really lives up to that Joker comparison.

The third act is also where it gets weirdly thriller-like, and the part where you can tell that Dickens was writing serialized popular fiction. Fagin and Sikes plot to silence Oliver for potentially blowing their whole criminal operation while the gold-hearted hooker/Sikes’ girlfirend Nancy (Leanne Rowe) essentially becomes an informant to the police – wow, this is “The Wire” Season 4. Everything comes to a head in a police standoff that leads to a climactic rooftop chase and an accidental hanging. And if that sounds crazy, I must inform you that Polanski and screenwriter Ronald Harwood left out Oliver’s evil, secret half-brother Monks, and such contrivances as the existence of Oliver’s long-lost aunt, the nice heap of inheritance money coming his way and that nearly everyone who wronged Oliver gets karmic retribution in the end. I’m not joking.

Clearly Polanski and Harwood were struggling to streamline Oliver Twist and pare it down to the essentials without excessively crowd-pleasing resolutions that seemed to be making up for all the earlier anguish in the story. In that regard it’s mostly successful even as Polanski-as-auteur hides behind the costumes, period production design and Victorian street drama. Mostly, it feels like a detour for the director as his resurgence in acclaim afforded him the opportunity to try something different.