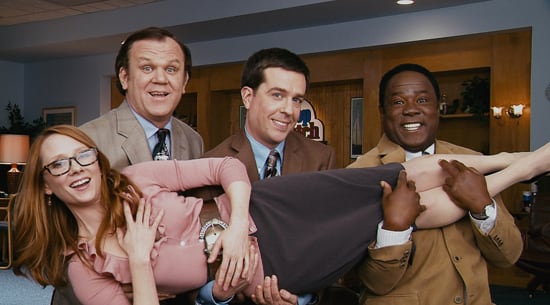 Cedar Rapids is a film that’s perfectly capable of sneaking right past you, a gentle, unassuming raunchy comedy that doesn’t quite get its hooks in you, but also doesn’t really incur or merit any resistance. It’s strong, charming, funny and not mean-spirited or ignorant in the way that a lot of modern comedies unfortunately are. Not quite as good or affecting as his previous film, the underrated Youth in Revolt, Miguel Arteta’s latest should do well to solidify his position as a reliable director of humane comedies that, like fellow ’90s indie dramedy to mainstream comedy convert Greg Mottola’s recent output, is at least partly appealing because it’s made by someone who actually understands how to make a movie, like a real one, and is interested in doing so.

The influence of producer Alexander Payne can be felt throughout, not just in Cedar Rapids’ Midwestern milieu, but in the head-on, stark and deadpan way Arteta’s chosen to frame it. There’s a sense that if this material had been placed in the hands of someone less kind and open, that it would come off as grotesque. Instead, despite the fact that protagonist Tim Lippe’s (Ed Helms) attitude and behavior come off as comically alien at times, his sheltered point of view is far out of tune with how you’d expect a grown man to think and act, the laughter is generally empathetic, tuned in to an identifiable frequency. This isn’t to say that there isn’t a patronizing edge to it, what else do you call it when you’re laughing at someone else’s simplicity? But it’s more “Oh, Tim” than “Get a load of this guy!” in nature.

Tim lives in a small town in Wisconsin, working as an insurance salesman at a small mom and pop firm. Orphaned at a young age and virtually adopted by his boss (Stephen Root, always a pleasure), he’s now offered a shot to step out from under the shadow of their most successful salesman (Thomas Lennon), recently deceased in an auto-erotic asphyxiation mishap. (Is this the first film to mine a laugh from a corpse’s neck wounds? I mean, INTENTIONALLY?) Tim is called upon to represent the firm at an annual regional gathering in Cedar Rapids, of (devoutly Christian) insurance companies, where his predecessor secured the coveted Two Diamonds Award of Excellence 4 years in a row. Tim takes the first flight of his 30 years, after saying goodbye to his former seventh grade teacher and current lover (Sigourney Weaver), whom he attempts to get “pre-engaged” to, to her restrained horror, and flies off into the wild blue yonder.

Tim is the kind of guy who owns a laminating machine and wears a money belt around his waist, who thinks the prostitute out front of the hotel (Alia Shawkat) is just a really friendly lady and that the hotel clerk (Mike Birbiglia) is trying to scam him when he asks for his credit card. He needs some friends to help him out, and they come in the form of roommates Ronald Wilkes (Isiah Whitlock Jr. of “The Wire”) as he periodically reminds us throughout the film), the brash Dean Ziegler (John C. Reilly channeling Bill Murray), and the kittenish, freewheeling Joan Ostrowski-Fox (a surprisingly affecting Anne Heche), who variously reinforce and undermine his personality in order to help him reach a place of personal growth. With their help, Tim discovers in himself an anti-authoritarian streak he didn’t realize he had, and he makes his way through a whole gauntlet of sometimes destructive formative experiences which eventually help him to realize that he doesn’t have to compromise himself in order to reach some sort of a compromise with the world, and that sometimes being true to yourself, even if your sense of self is defined by gentility, requires a fight.

This author has not added a biography. Meanwhile Andrei Alupului has contributed 82 posts. Click here to view them.