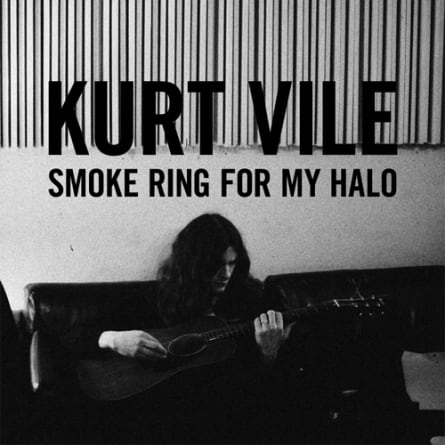 Smoke Ring for My Halo

There is something hazily holy about Kurt Vile’s Smoke Ring for My Halo. In word and deed, this fourth full-length of Vile’s (his second on brass ring label Matador) is a gravelly meditation that balances the lackadaisical with the disciplined. Though Vile seems to at turns both remember and forget that he is singing – it’s almost more of an accidentally melodic drawl than anything else – don’t mistake the casual delivery for take-it-or-leave-it tunelessness. For Smoke Ring is no “stoner folk” liturgy of half-baked ramblings but rather a toothpick-in-mouth contemplative piece that, while wearied in its words, is beatified by its instrumentality.

It’s the stereophonic clarity that makes your eyes widen at first listen. Heretofore conforming to a lo-fi aesthetic (most notably on 2009’s Childish Prodigy), Smoke Ring replaces all of that bedsit distress with professional sheen. The effect – especially for a guitarist like Vile whose fingerwork is so intricate – is so exacting it’s visual. The thwap of the bass string in “On Tour” is pure enough that you can testify to the buzzy vibration of that tightly coiled steel wire. The accented plucking, the pressure on the fretboard, you can feel it in your own fingers. The sensual production value of this record makes Vile’s acoustic guitar sound somehow supra-acoustic. It’s this full-bodied resonance that infuses the album’s strummers (“Ghost Town,” “Smoke Ring for My Halo”) with a nuanced dimensionality and the fingerpicked beauties (“Baby’s Arms,” “Runner Ups,” “Peeping Tomboy”) with a complicated yet humble grace. Members of Vile’s backing band (the Violators) sit in on Smoke Ring; light percussion (sometimes just the twist of a cabasa or rattle of tambourine) gives these folksy latticework compositions metronomic grounding while electrified roots-rock snarler “Puppet to the Man” is a full-band interruption to an otherwise “man alone” introspection.

And it is an intersection of bemused awareness, masculine vulnerability and a sort of accidental profundity that inform Vile’s words. “I get sick of just about everyone/ And I hide in my baby’s arms/ I shrink myself just like a Tom Thumb/ And I hide in my baby’s hands,” sings Vile in the glassine charmer “Baby’s Arms.” His love gets a little brutish in “Society Is My Friend”: “My hand is not for you to hold/ So kiss me on the mouth/ Without closin’ it all that much” is followed by a low growl, more musical than guttural. Vile’s intonations – peculiar as they may be with his “shhhyeahs” and “gurrrls” and countrified elongated syllables (as if he’s mulling over the words as he’s forming them, rolling them around in his mouth to get a feel for their meanings) – either beckon the ear or annoy it, depending on how you feel about heartland-style crooning this side of Tom Petty. Indeed, Vile sounds more Phil-abama than Philadelphia. The small, confessional moments (“I don’t wanna give up/ But I kinda wanna lie down/ But not sleep/ Just rest” in “Peeping Tomboy”) work best for Smoke Ring’s contrast between instrumental precision and free-form vocal meanderings. This blue-collar philosopher is equal parts elbow grease and high-gloss resin.

Smoke Ring is not an eager listen, it’s the kind of album that occurs to you after a few spins. All jokes aside, it takes some time before Vile’s nonchalantly wise exhalations hit. Dust motes, bits of hay, asphalt glitter – these are the elements you are breathing in. “I got it made most of the time,” he admits in “Puppet to the Man.” With an album like this, he deserves to kick back in his chair and soak it all in.